Rhabdomancy or rabdomancy is a form of divination by means of a rod, wand, staff, stick or arrow.

Derived from the Greek rhabdos (‘rod’) and manteia (‘prophecy’)

Rhabdomancy has been included in I Ching which uses small wooden rods, and also in dowsing, which often uses a wooden stick.

The practice seemed to originate with the Chaldeans and Scythians and spread to the Germanic tribes who cut pieces of bark from fruit trees, carved characters on them and threw them at a hazard on a white cloth.

According to a rabbi the Hebrews employed the same or similar methods. Except, they did not used characters but peeled the bark clear off one side of the rods and drew the presage from the manner in which the rods fell.

The Scythians and Alani used rods made of myrtle and sallow. The latter chose “fine straight wands” for their divining devices according to Herodotus, which seems to imply the Hebrew used similar methods.
It has been mentioned in some Bible verses as such Hosea 4:12 that reads “My people ask counsel at their stocks, and their staff declareth unto them” and Ezekiel 21:21 that describes the divination by arrows of Nebuchadnezzar II according to Thomas Browne’s Pseudodoxia Epidemica.

Rhabdomancy was in extensive use from the 16th century onwards in Germany for discovering ores. Sebastian Münster’s Cosmographia universalis 1544, and Georg Agricola’s De Re metallica 1546, provide early evidence of this art.

In John Brand’s Observations of Popular Antiquities (1777; 1813), the following description was cited from a manuscript on Discourse of Witchcraft written by Mr. John Bell (1705), which was delivered from the Theophylact: “To set up two staffs, and having whispered some verses and incantations, the staffs fell by the operation of Demons. Then they considered which way each of them fell, forward or backward, to the right or left hand, and agreeably gave responses, having made use of the fall of their staffs for signs.”

One method of rhabdomancy was setting a number of staffs on end and observing where they fall in order to predict the direction where one should travel or to find answers to certain questions. It has also been used for divination by arrows (which have wooden shafts) which known as belomancy.

Rhabdomancy can also be performed with a forked branch of hazel or willow that will be manipulated by the diviner or dowser by inclining it towards the place where a concealed spring or a metallic vein (lode) was to be found. Zulu divining sticks answered “yes” or “no”, depending on whether they fell or rose.

Other sources include rhabdomancy or dowsing as a means of finding water or precious metals buried underground using the help of an inverted pendulum system. Two metal rods about 20 inches long are bent into a 90 degree angle at one end so that they can be held in the hands while they spin from side to side. A dowser puts the two metal rods in his hands and proceeds to walk around an area of land.

When the metal rods cross each other, forming an ‘X’ the person marks the spot, and keeps going. When that place has been crossed again several times, and each time it is passed, it causes the rods to cross each other; the dowser knows they have discovered something. Although water and metals are primarily what dowsers look for, they have been known to seek out and find other things.

Belomancy or bolomancy, is the ancient art of divination by use of arrows and is often considered to be a subtype of rhabdomancy. Etymology From…

The indicator, either the rod or pendulum, as previously mentioned amplifies the person’s sensitivity, and its operation and indications are essential. Rods Dowsing as well…

Shape: – With or without a sleeve handle. The top wire can be 4 inches to over 2 feet long. The usual length is around… 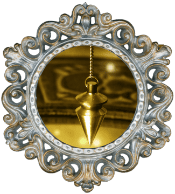 Dowsing, frequently called water witching or doodlebugging (USA), is a method of divination for discovering water, metals, and minerals, in or under ground that appears…