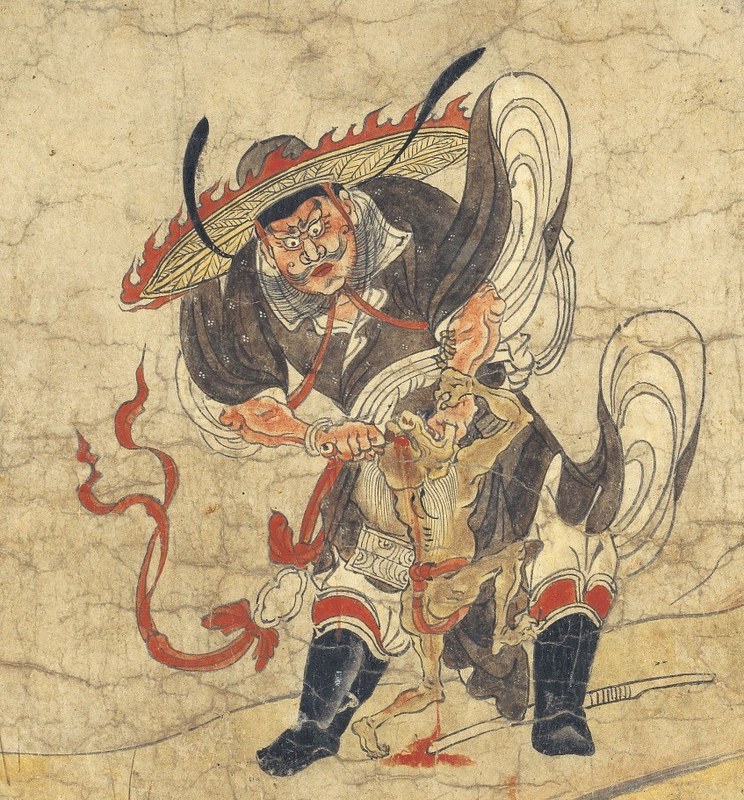 Although his primary modern fame is in Japan (Shoki is the Japanese version of his name), before he became the immortal Demon Queller, he was Chung K’uei, a Chinese scholar and physician. When he flunked his imperial service exams, he fell into such despair that he dashed his head against the palace steps, killing himself. The emperor was moved. He awarded Shoki his degree posthumously and arranged an official burial for the suicidal scholar. In gratitude for this honor and kindness, Chung K’uei vowed to spend his afterlife ridding the world of Demons.

His first act was to save the emperor, lying in bed and wasting away from illness. The emperor suffered a nightmare: he saw a small Demon steal his treasures. Suddenly, Shoki, in the guise of a bigger Demon, appeared in the dream, violently quelled the little Demon, and returned the emperor’s valuables. The emperor made a full recovery and Shoki’s reputation was set. Although venerated in China, Shoki is especially beloved in Japan, where he is traditionally considered a trusted spirit ally and his image is ubiquitous. Shoki dispels all kinds of Yokai as well as Demons.

Shoki’s image is a talisman against evil. His job is to keep trouble, misfortune, and evil spirits away from your home. He is a spirit of intense yang energy and can drive away ghosts and spirits who emanate from the yin world. Shoki protects against fire and illness. The Demon Queller is also the Plague Queller. He drives away smallpox and other disease Demons and so his image is featured on Japanese talismanic disease prevention prints. Shoki’s image is placed outside the home to keep it safe as well as inside, especially near the stove, for fire prevention. He is a vigilant guardian. Position his image so that he has a good view of anywhere where danger may emanate.

Shoki’s images are associated with ceremonies for the Boy’s Festival. This holiday for boys under age seven takes place on the fifth day of the fifth lunar month, a day when venomous creatures and malefic spirits are allegedly at their peak and on the prowl. Boys of this age are considered especially vulnerable to spiritual attack: these malevolent spirits are attracted by the purity of the boys’ yang energy (and also by the opportunity to cause trouble and heartache). Shoki drives them away. By the Kansei Era (1789–1800) it was custoMary to place banners displaying images of Shoki both inside and outside homes with boys under age seven.

There’s a looser, more relaxed side to Shoki, too. He’s frequently depicted in the company of courtesans, either rescuing them or submitting to their whims. The inherent joke is that these gentle courtesans quell the fierce Demon queller.

Shoki appears as a huge man with a big black bushy beard wearing the traditional cap and robes of a Chinese scholar and big black boots (the equivalent of stomper boots).

Talismanic paintings and prints featuring Shoki are often colored red, as this color is believed to be especially effective in warding off disaster. Surround Shoki’s image with other symbols of aggressive, righteous power, such as warrior dolls and suits of armor, so as to give the Demon Queller a little reinforcement. In addition to prints, banners, scrolls, and talismans, Shoki is a frequent subject of netsuke carvings.

A Demon queller is in Chinese and Japanese folklore, a fierce demigod hero dedicated to saving others from evil Demons. He is large and bearded…

Hosogami ORIGIN: Japan CLASSIFICATION: Kami Hosogami are smallpox spirits. (Hoso is smallpox in Japanese.) For safe recovery to health, the Hosogami must be soothed, propitiated,…

Yokai Bewitching Apparitions ALSO KNOWN AS: Bakemono Yokai are spirits of Japan, a vast category incorporating thousands of different spirits of all kinds, some anonymous…

Huang Ti, the Yellow Emperor, unified China and taught the arts of civilization. Not everyone wanted to learn. Chi U is the chief of the…

Jade Emperor ALSO KNOWN AS: Yu Huang Da Di ORIGIN: China The Jade Emperor is the spirit at the very pinnacle of the Chinese pantheon,…