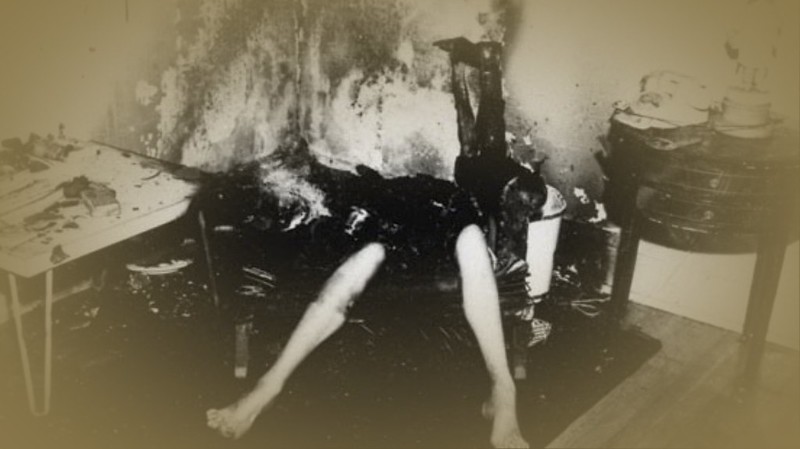 Spontaneous human combustion (SHC) is a phenomenon in which a human being supposedly bursts into ﬂames with no warning and for no apparent reason. Most victims of SHC are older adults, while women slightly outnumber men, and far more victims are overweight than not. Cases of SHC share other characteristics as well. Often the ﬁre is localized to the victim, so that furniture or other objects in the vicinity are not burned.

In addition, the body is typically damaged more severely than is normally seen in cases in which people die from ordinary ﬁres. In fact, in some cases the body is burned beyond recognition, suggesting a ﬁre of extreme intensity. Most of the time SHC occurs when the victim is alone, making it difﬁcult to conﬁrm that the ﬁre was truly spontaneous. Nonetheless, there are some stories of SHC occurring in front of dozens of witnesses who claim there was no apparent source of ignition, such as a lighted candle or cigarette, nearby when the blaze began.

According to these witnesses, SHC ﬁres look and act differently from ordinary ﬁres they have seen. Some have said that SHC victims burn with blue ﬂames and that water seems to fuel rather than extinguish them. The latter quality has led some people to suggest that SHC ﬁres are chemical in nature because certain chemical ﬁres are worsened with the application of water.

Because of the ﬁre’s unusual qualities, believers say that SHC must be caused by some unknown physical process, perhaps related to body chemistry, that produces enough heat within some people to ignite and burn them with great intensity. Proposed Explanations As to why some people would spontaneously combust and not others, believers say that the answer lies in the fact that most victims are in a highly emotional state in the moments before bursting into ﬂames, and many had been depressed or even suicidal for days before.

This suggests, believers theorize, that a victim’s emotional state creates energy that then causes the cells in his or her body to spark and ignite the body’s fat. One such believer, Pennsylvania school bus driver Larry Arnold, has theorized that some people have a heightened sensitivity, at the cellular level, to sparks produced by emotional energy, and this makes them more susceptible to SHC.

In support of this idea, believers have cited cases of spontaneous ﬁres associated with poltergeist activity, a phenomenon that is also connected to people in highly emotional states. Alternatively, some believers say that the energy creating SHC might be produced not by emotional upset but by some kind of psychokinesis, whereby the mind creates the phenomenon either unintentionally or intentionally by visualizing the ﬁre before it occurs. Skeptics, however, say that all supposed cases of SHC have an ordinary explanation.

Most of the time, they say, the cause is careless cigarette smoking, combined with combustible clothing and furniture. As an example, they cite a case reported in Arnold’s 1995 book, Ablaze!, involving an ailing, inﬁrm ninety-year-old Pennsylvania physician, John Irving Bentley, found burned to death in his bathroom in 1966. While Arnold and other believers argue that this is a clear-cut case of SHC, skeptics note that Bentley was a heavy smoker known for dropping ashes on his robe, carried boxes of wooden matches in his robe pockets, tried to extinguish the ﬂames with water before burning to death alone in his bathroom, and died in a spot where an updraft coming from the basement would have fueled the ﬁre.

Scientiﬁc Studies Scientists who have studied SHC, however, say that even with a lit cigarette and an updraft, it would be very difﬁcult to generate enough heat to produce a result similar to those attributed to SHC. In fact, in order to incinerate bodies to ash, crematoriums use a temperature of at least 2,372 degrees Fahrenheit (1,300°C). But studies have shown that under certain conditions, a body’s fat tissue and digestive system gases can cause it to burn so hot that even the bones will be affected.

For example, several studies attempting to duplicate the results of supposed cases of SHC (using the bodies of pigs, which have a similar fat content to humans) found that to reduce the bones to ashes, the bodies needed an additional fuel source, such as a little gasoline, in addition to burning fabric. As a result, some skeptics have suggested that victims might have been drinking alcohol before their deaths, and they might have spilled it on their skin, thereby supplying an additional fuel source for the ﬁre.

The pig tests also indicated that bodies needed to be kept burning for ﬁve hours in order for the bones to be completely destroyed. Consequently, skeptics have suggested that such a long burning time, possibly with little fuel, might have been achieved in apparent cases of SHC because of something known as the wick effect. Because of this effect, liqueﬁed fat will continue to burn even at low temperatures if a cloth wick has been placed in the fat, producing a combination of smoldering and ﬂaming that is eventually capable of turning bones to ash.

In many deaths attributed to SHC, the victims died alone in places where such a wick existed. For example, in one 1854 case in England, a woman who burned to death over a span of approximately two hours was lying on a hemp mat that would have acted as a wick. It cannot be proved, however, that the wick effect caused her demise, just as it cannot be proved that she did not spontaneously combust.