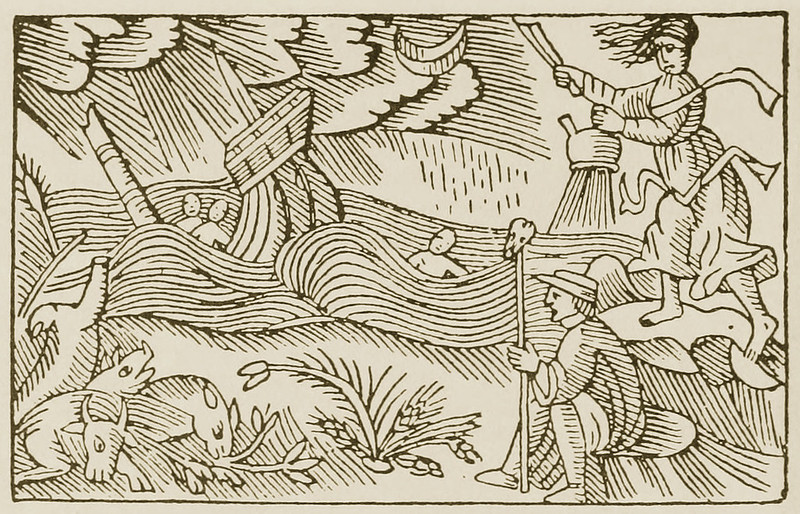 Storm raising is the ability of witches to cause tempests, hailstorms and lightning, according to lore, especially during the witch-hunts. By whipping up the elements of nature, witches struck homes and crops, sank ships and killed men and animals, all allegedly with great delight. Church authorities said God permitted the Devil and witches to do these maleficia as punishment upon the world.

After a Sabbat, witches were said to mount their brooms and fly out to sea, where they would stir up a tempest by dumping the vile contents of their Cauldrons into the water or by throwing their hair into the sea. From their brooms, they would hurl lightning bolts at ships. If they raised a storm over land, they would throw lightning at men, animals and buildings on the ground (see Flying).

Witches also caused storms by stirring water poured into holes in the ground, urinating into holes, reciting magical formulas, drawing magical diagrams and shutting up toads and spiders in pots. Spanish witches caused hailstorms to destroy fruit crops by scattering a magic powder over the fruit. Witches brought on rain by sacrificing CoCks in their cauldrons. Witches could control wind by tying three knots in a rope or whip and unloosing them one by one. One old Scottish recipe for storm raising called for dipping a rag in water and beating it three times on a stone in the name of Satan, while reciting the following:

I knock this rag upon this stone
To raise the wind in the devil’s name
It shall not lye till I please again.

Control of the elements, including the ability to raise storms and cause rain, has been attributed to magicians, shamans, sorcerers and witches since ancient times around the world (see Magic; Shamanism; sorcery). In ancient Egypt, magicians used waxen images and spells to raise winds and storms against enemy invaders. As early as 700, the Church was prosecuting sorcerers for causing storms, sentencing them to penance.

During the height of the witch hysteria, natural disasters were attributed to witchcraft, and many people were blamed, tried and executed for being the alleged perpetrators. In Ratisbon (now Regensburg), Germany, in the 15th century, a violent hailstorm destroyed all the crops, fruits and vines in a mile-wide swath. The townsfolk blamed the storm on witches and demanded an official inquiry. There was no shortage of suspects, but the field was narrowed to two women, who were separately imprisoned and interrogated. At first, both denied responsibility. They were tortured—one was hung by her thumbs—until they confessed not only to being witches and causing the storm but to copulating with incubi for 18 and 20 years, respectively. The day after they confessed, they were burned at the stake.

In the village of Waldshut on the Rhine, there lived a witch who was so despised by the townsfolk that she was pointedly not invited to a wedding celebration, as was nearly everyone else. Angry, she conjured up a Devil and asked for a hailstorm to pelt the merrymakers. He raised her up and transported her to a hill near the town, where she was seen by shepherds. She made a trench, urinated into it and stirred the urine with her fingers. The Devil lifted the liquid up and turned it into a violent hailstorm which pelted the dancers and wedding party and guests. The shepherds told the bewildered villagers about the witch, whereupon she was arrested. She confessed she had caused the storm because she had not been invited to the wedding. For this and other alleged acts of witchcraft, she was burned.

The most famous storm attributed to witches was recorded in the trial of Scotland’s John Fian in 1591. He and his alleged Coven of North Berwick Witches were accused of raising a sea tempest to try to drown James VI (James I) and Queen Anne on their way from Denmark. A storm did arise and slowed the ship down, but no one was drowned.

The Church prohibited superstitious remedies against Witchcraft such as storm raising, because of their pagan associations. What the Church recommended, however, was little more than superstition with a sacrament thrown in, and rituals that replaced magic incantations with Christian ones. In essence, they were pagan remedies trussed up with Christian window dressing.

Prayer, sacraments and the invocation of the name of God were all said to be the most effective weapons. If a person had faith in God and kept the commandments, revered the rites of the Church and protected himself with the sign of the Cross, then he would be immune from storms and tempests. The Malleus Maleficarum (1486) reports the testimony of one witch who was asked by a judge what could be done to stop a storm. She said the townspeople should recite:

I adjure you, hailstorms and winds, by the five wounds
of Christ, and by the three nails which pierced His hands
and feet, and by the four Holy Evangelists, Matthew, Mark,
Luke and John, that you be dissolved and fall as rain.

But most peasants were loath to give up their superstitions, and the church also sanctioned such remedies as the ringing of church bells during a storm, which was supposed to drive the storm devils away, and the placing in fields of charms made from flowers consecrated on Palm Sunday. If a storm struck, the charm would protect the owner’s crops, even though the surrounding land and crops would be damaged.

Another remedy was throwing three hailstones into a fire during the storm. This had to be accompanied with an invocation of the Holy Trinity, the Lord’s Prayer and the Angelic Salutation, all repeated two or three times, followed by the Gospel of St. John, “In the beginning was the word.” The sign of the cross had to be made in each of the four directions, and then “The Word was made Flesh” was repeated three times. Finally, the ritual was ended with, “By the words of this Gospel may this tempest be stopped.” Church officials said that while it was the holy words that really did the job, casting the hailstones into the fire added further torment to the Devil.

Contemporary Pagans and Witches may do weather rituals, such as for rain to end a drought, but do not believe in using weather magic to cause harm or suffering.


Witchcraft: A Concise Guide or Which Witch Is Which? – Isaac Bonewits

The Tempestarii were in medieval lore, witches who specialized in storm raising for the mythical dwellers of a land in the sky called Magonia. When…

sea witches The sailing trade in Britain has been steeped for centuries in folklore, including belief in sea witches, who allegedly have the power to…

A broom is a primary means of travel for witches, enabling them to travel at tremendous speed, according to lore. There are different origins of…