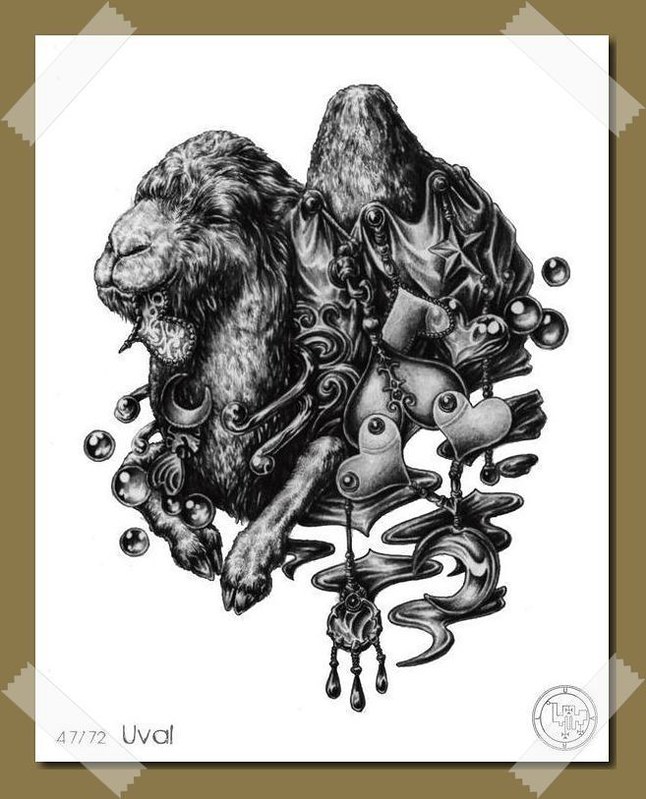 The Demon Uvall is a Fallen Angel and 47th of the 72 Spirits of Solomon. Once a member of the angelic order of Powers, Vual is a duke in Hell with 37 Legions of Demons under his command. He appears first as an enormous dromedary camel, then changes into human form and speaks in imperfect Egyptian. He procures the love of women; knows the past, present, and future; and makes enemies become friends.

UVALL, VUAL, or VOVAL. – The Forty-seventh Spirit Uvall, or Vual, or Voval. He is a Duke, Great, Mighty, and Strong; and appeareth in the Form of a Mighty Dromedary at the first, but after a while at the Command of theOr “with the Head of a Lion,” or “having a Lion his Head,” in some Codices.
Exorcist he putteth on Human Shape, and speaketh the Egyptian Tongue, but not perfectly. His Office is to procure the Love of Woman, and to tell Things Past, Present, and to Come. He also procureth Friendship between Friends and Foes.
He was of the Order of Potestates or Powers. He governeth 37 Legions of Spirits, and his Seal is this, to be made and worn before thee, etc.

Vuall is a great duke and a strong, he is seene as a great and terrible dromedarie, but in humane forme, he soundeth out in a base voice the AEgyptian toong. This man above all other procureth the especiall love of women, and knoweth things present, past, and to come, procuring the love of freends and foes, he was of the order of potestats, and governeth thirtie seven legions.

Once of the order of Powers, Wall is a great and powerful duke, who commands 36 legions. He appears as a tall and terrible dromedary or as a human who speaks Egyptian. He knows of the past/present/future.

WANT TO LEARN BLACK MAGICK? CLICK HERE The Demon Raum is a Fallen Angel and 40th of the 72 Spirits of Solomon. Raum is an…

WANT TO LEARN BLACK MAGICK? CLICK HERE The Demon Orobas is a Fallen Angel and 55th of the 72 Spirits of Solomon. Orobas is a…

WANT TO LEARN BLACK MAGICK? CLICK HERE The Demon Gremory (Gomory)is a Fallen Angel and 56th of the 72 Spirits of Solomon. Gremory is a…

WANT TO LEARN BLACK MAGICK? CLICK HERE The Demon Botis (Otis) is a Fallen Angel and 17th of the 72 Spirits of Solomon. As a…