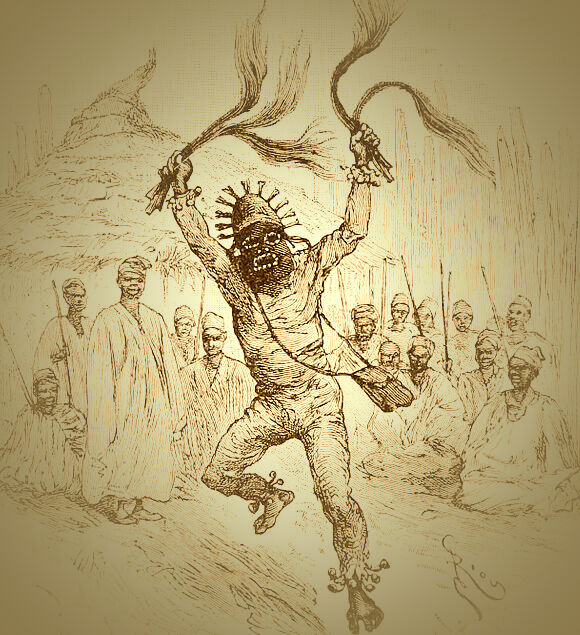 Agasou, the Leopard Spirit, is guardian of Dahomean traditions. Various theories regarding his root identity include:

• Agasou is an ancestral leopard spirit.

• Agasou is a war chief from the neighbouring Yoruba city-state Oyo, exiled for aggression and nicknamed Kpo for his ferocious nature.

• Agasou is that war chief exiled, not for aggression, but because his magic powers made others nervous: he could transform into a leopard.

• Agasou is a war chief nicknamed Kpo who had a clandestine affair with either King Tado’s wife or daughter, fathering a male child. When King Tado died, the child’s mother tried to place her son on the throne, but the people rebelled, preferring the king’s nephew, son of the king’s sister. The leopard’s son fled to the Dahomean city, Allada, which he eventually took over.

• Agasou may not actually be the ancestor of the Dahomean royal family, but may, in fact, have been venerated before their arrival in the region. The supplanted Gedevi people venerated a leopard spirit.

In Dahomey, Agasou is considered an ancestral spirit, patron of the Dahomean royal family. In Haiti, he is generally venerated as the lwa of home, family, lineage, and ancestry. He serves as a lieutenant in Lord Agwé’s army. Legend has it that Ayida-Wedo asked Agasou to bring Vodou and the power of the ancestors to Haiti from Africa (Giné).

Agasou immediately fulfilled this request, assisted by a crab. It is traditional for his devotees to refrain from eating crab. In Haiti, Agasou is understood to be a king.

He is syncretized to Saint Louis, the canonized king of France.

He manifests as a man or leopard. Even as a man, there may be a reference to leopards: leopard-skin clothing or leopard-pattern fabric, for instance.

Agasou is represented by images of Saint Louis or a leopard.

White, brown, and the spectrum from yellow to gold

Encyclopedia of Spirits: The Ultimate Guide to the Magic of Fairies, Genies, Demons, Ghosts, Gods & Goddesses– Written by Judika Illes

Agoussou Agasou, the lwa originally from Dahomey, arrived in New Orleans via Haiti. During his journey, pronunciation (and spelling) of his name evolved while much…

Orunmila : The Sky Knows Who Will Prosper Orunmila is the sacred diviner. He is the master of Ifa, a complex, sacred system of divination.…