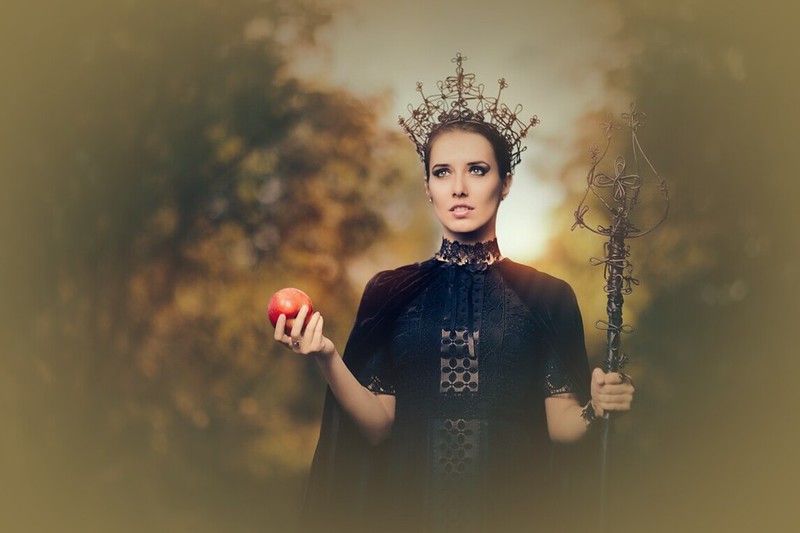 Apples, cultivated in Britain as early as 3000 B.C.E., have had a long association with Magic, witches and goddesses. Magic apple lands, whose fruit gave eternal life, were cultivated by various Western pagan goddesses, among them the Greek Hera, the Scandinavian Idun (Idhunn), the Teutonic Freya and the Norse Hel, Queen of the Underworld. In Iroquois myth, the apple is the central tree of heaven. In Christianity, the apple offered Eve by the serpent is the fruit of life but becomes equated with sin.

Games and divination with apples were part of the Celtic/Druidic harvest festival of Samhain (All Hallow’s Eve), now celebrated on October 31 (see Wheel of the Year). A surviving custom is the dunking for apples on this night. According to another custom, peeling an apple in front of a candlelit mirror on Samhain will reveal an image of one’s future spouse.

Magical fermented cider may have been used in other pagan rites. In parts of England, another name for strong cider is witches’ brew. Apples and apple peel are used in divination methods common in the British Isles.

In English lore, the apple tree is synonymous with enchantment and associated with figures in the Arthurian legends. Arthur, upon being mortally wounded, was spirited by three fairy queens to the magical place of Avalon, “Isle of the Apples” or “appleland,” ruled by MORGAN le Fay, the crone or Mother Death aspect of the Triple Goddess. Arthur’s knight Lancelot fell asleep under a grafted apple tree and was carried off by four fairy queens. Queen Guinevere gave an apple to St. Patrick, who died; she was accused of witchcraft and condemned to burn at the stake, but was rescued by Lancelot.

Witches who wished to bewitch or poison others were often said to use apples, as in the folktale of Snow White, who was put to sleep by the poisoned apple of the black witch-queen. In 1657 Richard Jones, a 12-year-old boy in Shepton Mallet in the county of Somerset in England, was said to be bewitched by a girl who gave him an apple. Jones suffered fits, and neighbors said they saw him fly over his garden wall. The girl, Jane Brooks, was charged with witchcraft, convicted and hanged on March 26, 1658.

According to English folklore, it is bad luck to pick all the apples in a harvest: some must be left for the fairies. The apple is a love charm in Vodun, and in English, Danish and German folklore. See Possession.

apple The fruit of the Tree of Knowledge that led to the fall of Adam and Eve became, during the witch hysteria, one of the…

Pomona The Apple Queen ORIGIN: Rome CLASSIFICATION: Nymph Pomona is the spirit of fresh fruit and fruit trees, especially apples. Her name derives from the…

This seemingly innocent fruit, cultivated by the Romans and Britons as early as 3000 B.C.E., has had a long association with Magic, Witchcraft, and goddess…

Oak apples are galls formed on oak trees by the larva of a type of wasp. In folk Magic, they are used as a means…

Ladon ORIGIN: Greece Gaia gave Hera a tree with magical golden apples as a wedding gift. The tree was planted in the Garden of the…