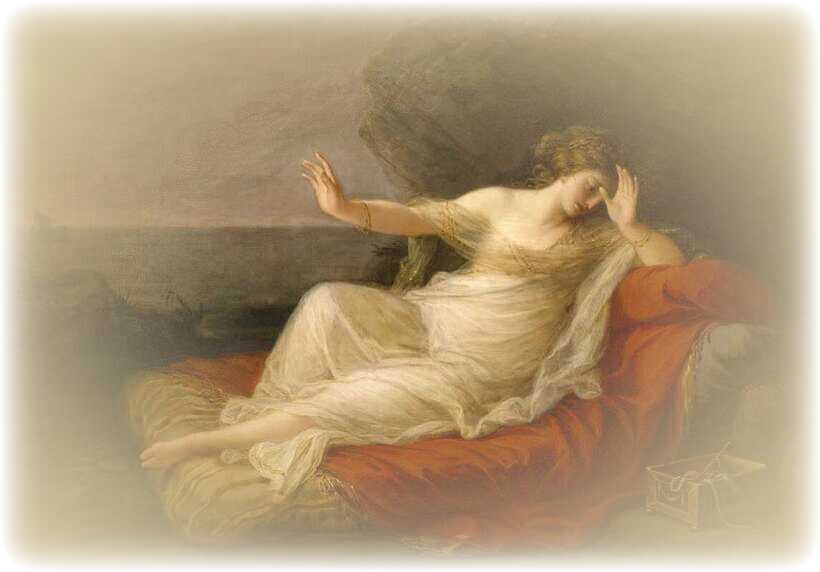 Ariadne – The Holy One; The Pure One

Ariadne is most famous as the Minotaur’s sister. She fell in love with Theseus and betrayed her brother, family, and kingdom by helping Theseus enter the labyrinth, kill the Minotaur, and escape. Ariadne holds the end of the spool of thread that rescues Theseus from the labyrinth. He rewards her by abandoning her on the deserted isle of Naxos, where Dionysus finds and marries her and they live happily after.

The tale of Ariadne, Theseus, Dionysus, and the Minotaur is the subject of operas, comics, and philosophy books. An illustrated retelling is found in Doris Orgel’s Ariadne, Awake! (Viking, 1994).

Beneath the classical myth lies a goddess. Ariadne is a pre-Greek goddess of Minoan Crete, possibly a snake and/or spider goddess. Perhaps after the fall of Minoan civilization, she decided to leave home and see the world. That’s what she does with Dionysus: their marriage is described as fruitful and joyful. They travel together, teaching the art of making wine. In some versions, Ariadne is immortal and they’re travelling still. The Ariadne of Minotaur fame may be this goddess, her avatar, or her high priestess.

In other myths, she eventually dies, either of old age or in childbirth. Dionysus commemorates her by placing her crown in the sky. Alternatively, when he retrieves his mother from Hades, Dionysus simultaneously resurrects Ariadne.

Ariadne is invoked for assistance with true love, marriage, and childbirth. She is considered an ameliorating influence on Dionysus and may be petitioned for relief of alcoholism.

Ariadne, happily in company with Dionysus, was a favourite subject of ancient Greek vase painters. Victorian painters preferred to pose her alone. She is often portrayed as a sleeping goddess. Artist John William Waterhouse (1849–1917) envisioned Ariadne dressed in deep saffron hues, sleeping in the company of leopards and poppies.

Ariadne is venerated alongside her husband, mother-in-law, satyrs, and any of the spirits in Dionysus’ entourage. In addition, she was also traditionally venerated together with Aphrodite in Cyprus.

Ivy, which twines like snakes; potentially a mild intoxicant; symbolic of eternity

She is associated with both the lab-yrs and the labyrinth.

The Corona Borealis (Northern Crown) is her crown.

Aglauros Aglauros, eldest of the Aglaurides, was Athena’s first Athenian priestess, but she was also the subject of a Mystery tradition. Scholars theorize that Aglauros…

Libera is the feminine counterpart of Liber. She is the goddess of libido; spirit of irrepressible female vitality. Liber guards seed; Libera makes sure that…

Akalli, Ariadne’s older sister, is the eldest of Pasiphae and Minos’ children. While still a young teenager, she met the youthful Apollo while he was…

Zemele Mother of the Earth ORIGIN: Phrygia Once a very important goddess in her own right, Zemele is now overshadowed by her son, Dionysus. The…

Anius (grievous, troublesome) In Greek mythology, son of Apollo by Rhoeo (or Creusa). Rhoeo’s father, Staphylus of Naxos, a son of Dionysus and Ariadne, put…