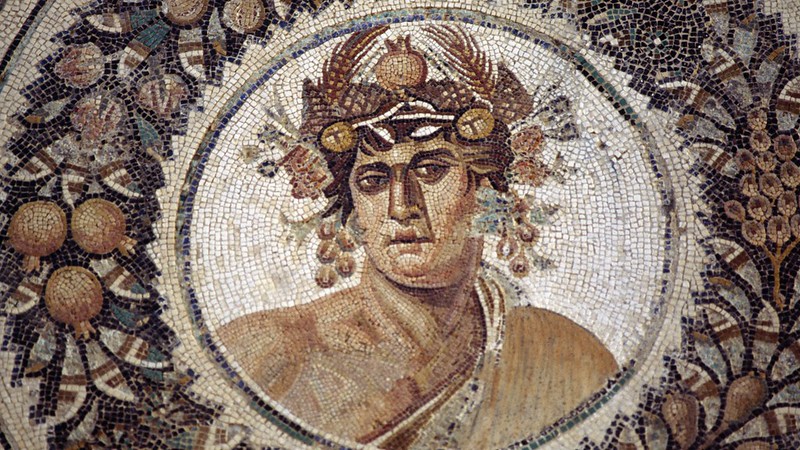 Dionysus is popularly called the God of Wine, however that classification doesn’t begin to do him justice as this powerful deity is so much more than that:

• Dionysus presides over Mysteries of birth, life, death, and resurrection

He was the last of the twelve deities incorporated into the Olympian pantheon and so is usually classified as a “Greek god,” but his original homeland is believed to be Thrace: modern Bulgaria and Romania both claim to be his birthplace. Dionysus was accepted as an Olympian by the fifth century BCE but was known to the Greeks since at least the end of the Bronze Age.

Dionysus was twice born, first as the child of Zeus and his daughter, Persephone. Zeus named him Zagreus and designated him his heir over all his other children. Jealous Titans kidnapped Zagreus, ripped him to pieces, and ate him, except for his heart, which Athena rescued. Livid Zeus reduced the Titans to ashes and formed humans from these ashes, thus all people share in Dionysus’ (Zagreus’) essence.

According to one myth, Demeter hid Persephone in a Sicilian cave guarded by two dragons, Zeus secretly slithered into the cave in the form of a snake and seduced Persephone, who conceived. A prophecy foretold that this child would rule over Zeus’ other children, and so Hera sent Titans to kill the baby. The Titans whitened their faces with chalk so that they appeared to come from the realm of death. Attacking the child, they cut him into seven pieces, boiled his flesh in a cauldron, then roasted him on seven spits. (This reproduces animal sacrifice rituals of the time.) Zeus, lured to the cave by the sublime fragrance, realized the situation and hurled the Titans into Tartarus.

Zeus brewed a love potion from Zagreus’ heart and fed it to Princess Semele. She conceived Dionysus but died before giving birth. Zeus rescued the unborn child, removing him from his mother’s body and sewing him up in his own thigh to incubate until ripe and ready to be born. Dionysus was then hidden away for his own safety; he grew up in the wilderness of Thrace, nursed by goats.

Dionysus was persecuted. Various spirits attempted to prevent him from achieving full power, most notably Hera, who struck him mad. Kybele healed and then initiated him. Reaching maturity, Dionysus led a caravan through Egypt, the Levantine Coast, Asia, and India, accompanied by a parade of Maenads, satyrs, and panthers. Wherever Dionysus travelled he taught people assorted agricultural and artisanal arts, especially viniculture, the creation of wine, and overcoming military opposition, when necessary. Dionysus is not a fighter and does not usually harm anyone directly. Instead, he strikes them temporarily insane so that they harm themselves, sometimes fatally. Dionysus also liberates from madness and heals mental illness. Among the punishment he inflicts may be alcoholism. If propitiated, he can heal and relieve this ailment, too.

In addition to wine, Dionysus is associated with opium and mushrooms. His festivals featured nocturnal processions with music and masked, costumed revelers. These processions may be understood as armies of spirits, animals, musicians, and women exulting in their sexuality. Dionysus has dominion over all theatrical and dance performances. He is the patron of actors. He was invoked before all performances and presided over drama competitions.

Dionysus typically manifests in the form of a man, lion, bull, or goat. Heis the horned Green Man, crowned with snakes. He is sometimes described as androgynous or effeminate with long, beautiful, dark, wavy or curly hair. Dionysus is wine: by drinking wine, one shares the sacrament of Dionysus’ body.

He is sometimes venerated in the form of a huge phallus.

His primary attribute was the thyrsus: a wand (originally a fennel stalk) topped with a pinecone; also cymbals, frame drums, and other percussion instruments.

Dionysus only wants to be alone when he’s hungover. He is a gregarious, friendly spirit usually surrounded by a retinue including devotees, sacred animals, and other deities. His allies include:

Dionysus eventually became Apollo’s altar-equal at Delphi, taking over the shrine in winter. He was considered Apollo’s opposite, representing hot ecstatic energy rather than Apollo’s cold rationalism. The coasts of southern Italy are allegedly among Dionysus’ favourite places.

Devotion to Dionysus once dominated Greek winters. In Athens, he was honoured by four festivals:

• Dionysia (end of November/beginning of December)

• 6 January, now celebrated as the Feast of Epiphany, is the day celebrated by Eastern Christians as the anniversary of Jesus’ baptism in the Jordan River but was once known as the Theodosia (the “Gift of God”), the day the water in the sacred spring of Dionysus’ temple in Andros, Greece, tasted like wine. Clement of Alexandria (140–215 CE), early Church father, wrote that 6 January was Dionysus’ birthday.

Zemele Mother of the Earth ORIGIN: Phrygia Once a very important goddess in her own right, Zemele is now overshadowed by her son, Dionysus. The…

Olympian Spirits ORIGIN: Greece When children are asked to name Greek gods, they are almost always really being asked to name the Olympian pantheon. Twelve…

Semele In Greek mythology, daughter of Cadmus, king of Thebes, and Harmonia, mother of Dionysus by Zeus. Zeus fell in love with Semele and often…

Horae : The Hours The Horae are the joyous goddesses of the seasons. Daughters of Zeus and Themis, they are spirits of abundance. The Horae…

Silenus The Ecstatic One; The Stamping Foot Dancer ALSO KNOWN AS: Silenos; Seilenos CLASSIFICATION: Silen Silenus is unusual for a Silen or centaur. He is…