The Most Lovely One; Worker from Afar; Three -Headed Hound of the Moon; Influence from Afar; The One Before the Gate; Light Bringer

Hekate is Queen of the Night, Goddess of Witchcraft, and among the rulers of Spirit World. She is the Queen of the Crossroads: Hekate patrols the frontier between life and death. She serves as an intermediary between spirits and humans. She owns the ultimate skeleton key: the key that unlocks the gates to all realms.

Although now most associated with Greek mythology, her name, meaning “influence from afar” acknowledges Hekate’s foreign origins. She may have originated in what is now Georgia on the Black Sea, home of Medea, her most famous devotee and priestess. (Hecuba, Queen of Troy, is another well-known devotee.) At one time, Hekate was chief deity of Caria, now in western Turkey. The Greeks knew her as a Titan’s daughter and as the confidante and handmaiden of Persephone, Queen of the Dead.

Hekate is a goddess of life, death, regeneration, and magic. She rules wisdom, choices, expiation, victory, vengeance, and travel. She is the witness to every crime.

• She is invoked for justice, especially for sexual crimes against women and girls.

• Hekate is invoked when justice is not forthcoming from other channels.

• Hekate has the power to grant or deny any mortal’s wish.

• She may be invoked for protection for dogs and from dogs.

• Hekate is petitioned for fertility, especially for female children.

• She brings victory in battle.

• Hekate may be invoked for healing, especially if medical solutions have failed.

• She may be petitioned for swift, painless death.

• Hekate can banish ghosts (or produce a ghost infestation).

Hekate is an exceptionally powerful spirit. The Theogony of Hesiod describes Hekate as honored by Zeus above all others. According tomyth, Hekate once served as an Angelas, a messenger for the other deities. She stole Hera’s beauty salve to give to her rival, Europa. Hera, enraged, pursued Hekate, who fled first to the bed of a woman in childbirth, then to a funeral procession, and finally to Lake Acheron in Hades where she was cleansed by the Cabeiri. Hekate emerged more powerful than ever, a goddess of birth, death, and purification. She rules passages between realms of life and death and is thus invoked by necromancers.

Hekate is renowned for her expertise with plants and her knowledge of their magical and healing powers. A famed magical garden was attached to her temple in Colchis on the Black Sea, now in modern Georgia. Some scholars suggest that an ancient Greek women’s guild, under the divine matronage of Hekate, once had responsibility for gathering and storing visionary, hallucinatory, and poisonous plants. The same word in Greek indicates “pharmacist”, “poisoner”, and “witch.”

Hekate typically responds to petitions via visions and dreams. If lost at a crossroads, literal or metaphoric, invoke her name and then pay attention to signs from her. She can be a shadowy, oblique goddess: her response may be subtle. Look for her animals: snakes, dragons, cats, and especially dogs.

Midwives, witches, healers, herbalists, dog lovers and rescuers; she is the matron of women in general and protects those who ride horses.

Hekate, Queen Witch, is a shape-shifter supreme: usual manifestations are as a black dog or mature woman. She may manifest as a haggard, decrepit crone or a sexy, elegant, seductive woman. She even has an occasional mermaid manifestation. She may wear snakes in her hair. Every once in a while she appears as a black cat, snake, or dragon.

Hekate is portrayed with three bodies, each facing a different direction. Alternatively, she is depicted with a woman’s body but three animal heads: those of a dog, horse, and lion. A statue of Hekate from the eighth century BCE shows her with wings, carrying a snake.

Hekate may be venerated alongside Artemis, Persephone, Demeter, and/or Kybele. Hekate dances in the entourage of Dionysus.

Snakes, toads, dragons, cats, but most especially dogs: Hekate has an extremely powerful bond with dogs: even when manifesting in human form, she is usually accompanied by a pair of hounds. If appearing without dogs, Hekate may circle in canine fashion. Somehow there will be a canine reference.

Three-way or T-shaped crossroads; Hekate was a goddess with an organized cult. In addition to Caria and Colchis, she had sanctuaries in Aigina and Lagina and a grove on the Aventine hill. She is the matron goddess and guardian of the city of Istanbul (previously called Byzantium and Constantinople). Hekate is credited with saving that city from attack by King Philip II of Macedonia in 304 BCE. His forces attempted to attack secretly during a dark moon but Hekate lit a crescent moon, creating enough light for the Byzantines to apprehend their danger and save themselves. In gratitude, they began using her symbols (star and crescent moon) on their coins. The image still appears on the Turkish flag. The image predates Islam and was the official emblem of Byzantine Greeks.

Night time is the right time for Hekate: she only accepts offerings and petitions at night. All festivities, rituals, and ceremonies in her honor are held after dark. The only acceptable illumination is candles or torches.

The last day of each month is dedicated to Hekate.

• In Italy, Hekate shared a festival with Diana on 13 August.

• A Friday the 13th in August is especially sacred.

• 16 November is Hekate Night for modern Wiccans and Neo-Pagans.

Hekate’s ancient devotees held dinners in her honor known as Hekate Suppers. Foods associated with her were prepared. The entrée was usually fish, especially red mullet. Devotees feasted and celebrated. Offerings and leftovers were placed outside the door or at a crossroads for Hekate and her hounds. Even way back when, cynics scoffed that food placed outside was actually consumed by feral dogs and homeless people without realizing that this is Hekate’s intent: this is one way she accepts offerings. (The Church was still trying to eradicate this ritual as late as the eleventh century.)

Smaller, private offerings may be left at a crossroads, too:

Place offerings on a plate or flat stone and leave them at a crossroads after dark.

Make your invocation and then walk away without looking back.

Do not return for the plate but consider it part of the offering. (In other words, don’t use a plate you wish to keep.) Encountering or hearing a dog is an indication that your petition has been heard. 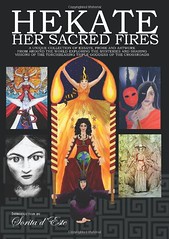 Hecate In Greek mythology, a powerful goddess who became the patron of magic and witchcraft. Hecate has three aspects: goddess of fertility and plenty; goddess of the moon; and queen of the night, ghosts and shades. In her moon-goddess aspect, she is often part of a trinity with Selene and Diana/Artemis.

Hecate possesses infernal power, roaming the earth at night with a pack of red-eyed hell hounds and a retinue of dead souls. She is visible only to dogs, and if dogs howl in the night, it means Hecate is about. She is the cause of nightmares and insanity and is so terrifying that many ancients referred to her only as “The Nameless One.”

She is the goddess of the dark of the moon, the destroyer of life but also the restorer of life. In one myth, she turns into a bear or boar and kills her own son, then brings him back to life. In her dark aspect, she wears a necklace made of testicles; her hair is made of writhing snakes which petrify, like the medusa.

Hecate is the goddess of all Crossroads, looking in three directions at the same time. In ancient times, threeheaded statues of her were set up at many intersections and secret rites were performed under a full moon to appease her. Statues of Hecate carrying torches or swords were erected in front of homes to keep evil spirits at bay. Hecate has been associated with many incantations, sacrifices and Rituals throughout history.

In ancient times, people sought to appease her by leaving chicken hearts and honey cakes outside their doors. On the last day of the month, offerings of honey, onions, fish and eggs were left at crossroads, along with sacrifices of puppies, infant girls and she-lambs. Sorcerers gathered at crossroads to pay homage to her and such infernal servants as the Empusa, a hobgoblin; the Cercopsis, a poltergeist; and the mormo, a ghoul.

One petition for her patronage was recorded in the 3rd century by Hippolytus in Philosophumena:

Come, infernal, terrestrial, and heavenly Bombo (Hecate), goddess of the broad roadways, of the crossroad, thou who goest to and fro at night, torch in hand, enemy of the day. Friend and lover of darkness, thou who doest rejoice when the bitches are howling and warm blood is spilled, thou who art walking amid the phantom and in the place of tombs, thou whose thirst is blood, thou who dost strike chill fear into mortal hearts, Gorgo, mormo, moon of a thousand forms, cast a propitious eye upon our sacrifice.

As the goddess of all forms of magic and witchcraft, Hecate was far more important in antiquity than the mythical sorceress Circe, who was sometimes said to be her daughter, or the witch medea, also sometimes said to be Hecate’s daughter, who helped Jason steal the Golden Fleece. In modern Witchcraft, Hecate is usually associated with the lunar trinity, the Triple Goddess. She rules over the waning and dark moon, a two-week period that is best for magic that deals with banishing, releasing, planning and introspection. She is invoked for justice.

Over the past few years Hekate has gained increasing popularity around the world. While there are books written about the historical Hekate, there is a…

Hekate Her Sacred Fires is an exceptional book for an extraordinary, eternal and universal Goddess. It brings together essays, prose and artwork from more than…

The Lampades, infernal Nymphs, inhabit Hades. Their origins are murky: they may or may not be daughters of Nyx and/or the various river deities of…

Helios : The Watcher; The Untiring Eye; The All Seeing, Ever Watching Helios is the sun as well as the original spirit of the sun…

In Circle for Hekate – Volume I: History & Mythology, the author draws together scholarly research from a wide range of sources, highlighting the manifold…