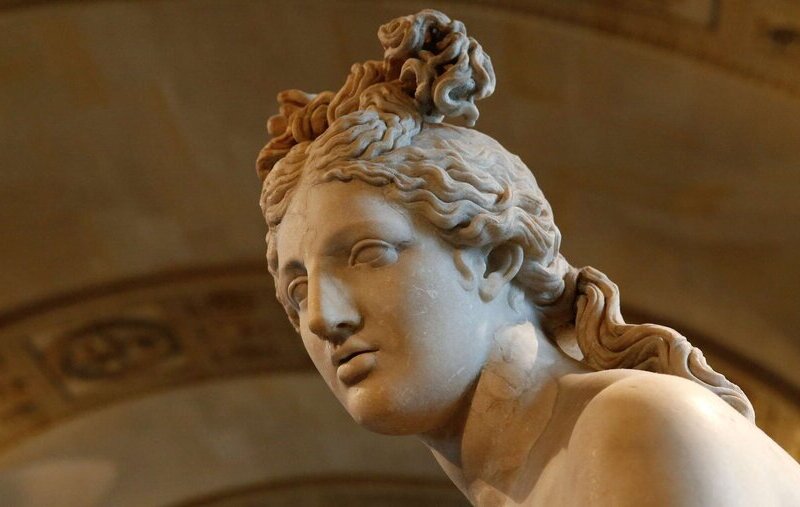 Born from the Foam; The Golden One; Far-Shining; She of the Beautiful Buttocks; The Shape-Shifter; She Who Postpones Old Age; The Dark One; The Black One; The Gravedigger; The Queen; Lady of the Sea; The Black Queen

According to Olympian myth, when Uranus, Spirit of the Sky, was castrated, his severed member, dripping with sperm and blood, dropped into the fertile sea. Aphrodite was born of this merger of sea and sky. She came ashore at Cyprus, carried to land on a large scallop shell. Fittingly for a sex goddess, the Greek word kteis means “vulva” as well as “scallop.”

Aphrodite, although now most associated with Greece, is originally a Semitic fertility/war spirit, akin to Astarte or Ishtar:

• She may be native to Cyprus, gateway between Mediterranean Asia, Europe, and Africa.

• She may originate in Syria or Assyria.

• Herodotus wrote that Phoenicians brought her to Cyprus from Ashkelon, now in Israel.

Although the ancient Greeks adored Aphrodite, they were uncomfortable with the typical Near-Eastern merger of sex, fertility, and war spirit all bundled up in the form of a beautiful woman. In order to incorporate Aphrodite into the Olympic pantheon, the Greeks compartmentalized her, suppressing her warrior attributes. (This is made explicit in the Iliad when she is ordered off the battlefield.) Aphrodite’s main function in Greece became love, romance, sex, and protection of mariners. By the end of the Classical Era, many were uncomfortable with her raw sexuality: she was reenvisioned as Aphrodite Urania, Goddess of Heavenly Love.

Aphrodite can raise and placate winds. Not only does she have power over people, animals, and plants, she has power over spirits, too, or at least most of the Greek pantheon. Exceptions are Artemis, Athena, and Hestia, who are immune to her powers. All the rest succumb to her allure. If you find yourself in trouble with them, appeal to Aphrodite for help. (In terms of altar space, keep Artemis and Athena away from Aphrodite, and do not petition them together.)

Be sure to fulfill all vows in a timely manner. She is not always a patient spirit. If she loves you and Demonstrates favour, you will be expected to offer consistent attention and gifts. Aphrodite usually Demonstrates anger via animal attacks or bad luck in love.

Aphrodite, a powerful, tremendously generous goddess, may be petitioned for virtually anything. Aphrodite, sometimes called the Oldest Fate, may have power over destiny. She may be able to change fate.

Lovers, practitioners of sacred sex and sex magick, sex workers, those involved with erotica. She is the matron of mariners and sailors (literally and on seas of love and life).

Aphrodite most commonly manifests as a mermaid or a blindingly beautiful woman who shines so bright that she dazzles the eye. Roses bloom beneath her feet. She likes company and often travels with an entourage of spirits. She will likely be accompanied by at least one of her sacred creatures (typically a disparate band of animals who wouldn’t be expected to peaceably appear together, the tip-off that you’re in the presence of a goddess). She can, if she chooses, manifest in any of their forms, too.

• Early statues portray her wearing a polos hat and/or robes patterned with roses or stars.

• Later statues depict her in various stages of undress.

• She was venerated in the form of a conical stone at Paphos.

She is sometimes depicted as a black statue; vestiges of her veneration may survive in some Black Madonnas. Images of Aphrodite holding her baby son, Eros, may inspire some Madonna and child imagery. (See Also:> Black Madonna; Isis.)

Scallop and cowrie shells, sea anemone, fishing net; Aphrodite possesses a magic belt that serves as an irresistible love magnet: she is generous and will share this girdle as well as secrets of romance and erotica, accessed via visualization and dreams.

Aphrodite is Queen of Beasts and loves all wildlife, but some are especially sacred to her: bear, bee, deer, dolphin, goat, leopard, lion, rabbit, toad, turtle, wolf.

Aphrodite rides a goat or young male deer on land, a dolphin at sea, and a swan or goose in the air. Doves pull her chariot.

Apples; pomegranates; poppies; linden trees; myrtle; all kinds of roses, especially rock roses (Cistus spp.) and dog roses (Rosa canina), which grew from the tears she wept for Adonis and still carry her perfume; another sacred floweris Ornithogalum umbellatum, the Star of Bethlehem or Grass Lily

The Summer Solstice: ancient devotees celebrated the day by decorating small toy boats with flower garlands, then sending them out to sea bearing petitions for Aphrodite.

• Aphrodite’s most sacred place is Cyprus. The Rock of Aphrodite, reputed to be the spot where she first came ashore, stands near Old Paphos on the southwest coast of Cyprus.

• The Ionian island of Cythera: this is the land nearest where her father’s severed genitals hit the water and thus her point of conception. After the Trojan War, her mortal son, Aeneas, built her a temple here.

• Corinth, once her chief sanctuary on the Greek mainland.

• Her great temple in Erice, Sicily, is now the home of the Black Madonna of Custonaci.

It is crucial that her altar be beautiful. Decorate with ocean motifs, flowers, greenery, and representations of her attributes and sacred creatures. Alternatively create a garden in her honour, which becomes an outdoor shrine, an altar on Earth. (She once had sacred botanical gardens in Athens.)

Call Aphrodite with the scent of frankincense and myrrh. Other favourite offerings include perfume, roses, myrtle, honey, and wine. Ancient worshippers offered triangle-shaped honey cakes. Commandaria, a Greek dessert wine, was traditionally served at her festivals.

Mylitta descended to Earth in the form of a flaming, falling star that landed in the freshwater spring named Afqa, source of the Adonis River…

Dione, water goddess of fertility and divination, is a shadowy figure in Greek mythology: she’s Zeus’ first wife. Dione and Zeus presided over the Oracle…

Venus was originally the Italian goddess of fertile soil, the presiding spirit of the vegetable garden. She was a rustic garden goddess with a relatively…

Olympian Spirits ORIGIN: Greece When children are asked to name Greek gods, they are almost always really being asked to name the Olympian pantheon. Twelve…