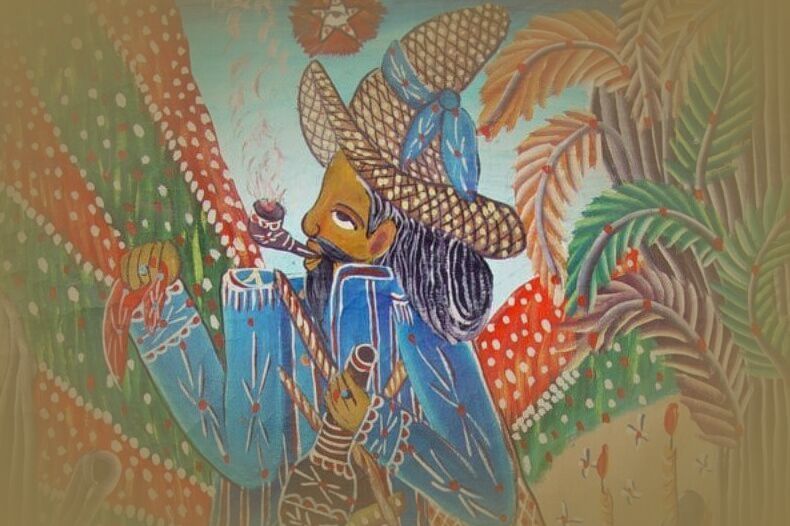 Papa Azaka presides over the ancient, profound bonds between Earth and agricultural people. He is the divine country cousin and something of a trickster. He is generous, hardworking, good-natured, and protective, but if he’s not well fed or considers himself disrespected, he can be mean and vicious. Like a stereotypical peasant, Papa Zaka is convinced that everyone is always out to rob him.

Unlike most lwa who come from Africa, Azaka may have been born in Haiti: He is the spirit who presides over alliances between African and indigenous Haitians (Taino), possibly an indigenous spirit incorporated into the Vodou pantheon. His name may derive from the Taino maza, indicating maize. (See Also:
Anacaona.)

He is the sacred peasant. His manners are rough but don’t let his appearance fool you. He is not a powerless peasant but a potent lwa. His ragged clothes and modest demeanor are a bluff to see how you behave. Everyone is respectful toward the rich and beautiful, but how will you treat a poor, ragged country bumpkin?

Papa Zaka hates the rude and stingy and punishes those who exploit and oppress poor workers. If consistently treated with respect, he appreciates it greatly and can be very loyal and protective. However, he is a suspicious spirit who is forever testing people. (If you offend him, he will reject your request and possibly make it backfire. He Demonstrates displeasure via illness that mimics symptoms of food poisoning.)

Papa Zaka knows the secrets of the soil. He is a master herbalist who appears in dreamswith advice and instructions. Papa Zaka is syncretized to Saint Isidore the Laborer, whose iconography also includes a sack slung over one shoulder.

Papa Zaka is patron of those who earn their bread by the sweat of their brow: farmers, labourers, especially day laborers, workers of all kinds. He likes women and can be very flirtatious. He may be inclined to help out hardworking, good-hearted women who treat him respectfully and kindly.

Papa Zaka is very recognizable, consistently wearing traditional Haitian peasant’s garb: blue denim, red scarf, straw hat, and a bag slung over his shoulder. He may limp. He may not be charming but aggressively beg and pester for rum, food, or the money to buy them with.

The dreaded Tonton Macoute, the private militia of Haitian dictator François “Papa Doc” Duvalier (1907–1971), based their attire on the image of Papa Zaka with the addition of dark sunglasses and guns. Papa Doc may have modeled his own attire after that of the Barons.

He may be married to the lwa Clairmesine Clairmeille, or to his female counterpart, Couzenne, who runs the market stand where they sell the produce they grow.

A traditional altar may be created or offerings placed in a Haitian macoute sack (a burlap bag substitutes). Fill it with nonperishable things he likes: a sealed bottle of rum, pipe tobacco, and a loaf of brown sugar. Tie the bag up with a red bandanna; hang it near his altar or consider the bag his altar. Don’t ever open it except to add more offerings. (Talk to him; tell him what you’re doing as you’re doing it to assuage his fears.)

Whatever you give him, give him a lot. Papa Zaka is always hungry: he eats like a man who’s laboured all day. Give him the equivalent of lumberjack meals. Keep food simple, abundant, frequent, and reliable. His favourite food is corn. He likes bread, melons, beans, and staples like brown sugar (or sugar cane), salt, and pipe tobacco. He prefers overproof white rum or other clear alcoholic beverages but is not likely to spurn most alcoholic beverages. He really likes absinthe.

He hates having anyone taste his food. In essence, he’s the anti-Oshun. Oshun fears that untasted offerings of honey are poisoned; Azaka worries that tasting is stealing. This is usually not a problem with something like pipe tobacco or bottled liquor, but those offering cooked meals sometimes taste what they’re preparing without even thinking, just from habit. If he begs for something that wasn’t originally intended for him, that’s fine. He’s getting something extra. But if a dish is created intentionally for him, make sure he gets every last bite.

Like a subsistence farmer, Papa Zaka worries about going broke and thus really likes cash offerings. Place them in an envelope or money bag and lay on his altar or beneath his votive statue so he can keep a firm grip on it. Consider this cash gone: you will never be able to use it. However, in emergencies, he may be willing to front you a loan or serve as your bank. Don’t just take the money: it’s not yours anymore, it’s his. Request his permission. Money must be paid back promptly. He may charge interest, too, sometimes at exorbitant rates. Be prepared to bargain with him. He likes to bargain and is a shrewd negotiator. Ask him for advice when you need to bargain with others.

Papa Gedé is the leader of the Gedés, landlord of the cemetery, its spiritual superintendent. Some people use this name to indicate Baron Samedi. Some…

Papa Lisa is a lwa who travels in Ezili’s entourage. His dwelling place is within trees. Ceremonies invoking and honoring Papa Lisa are held in…

Eshu Elegbara : Tree of Justice Eshu Elegbara is the master of the crossroads. He is the lord of communications, guardian of gates. He is…