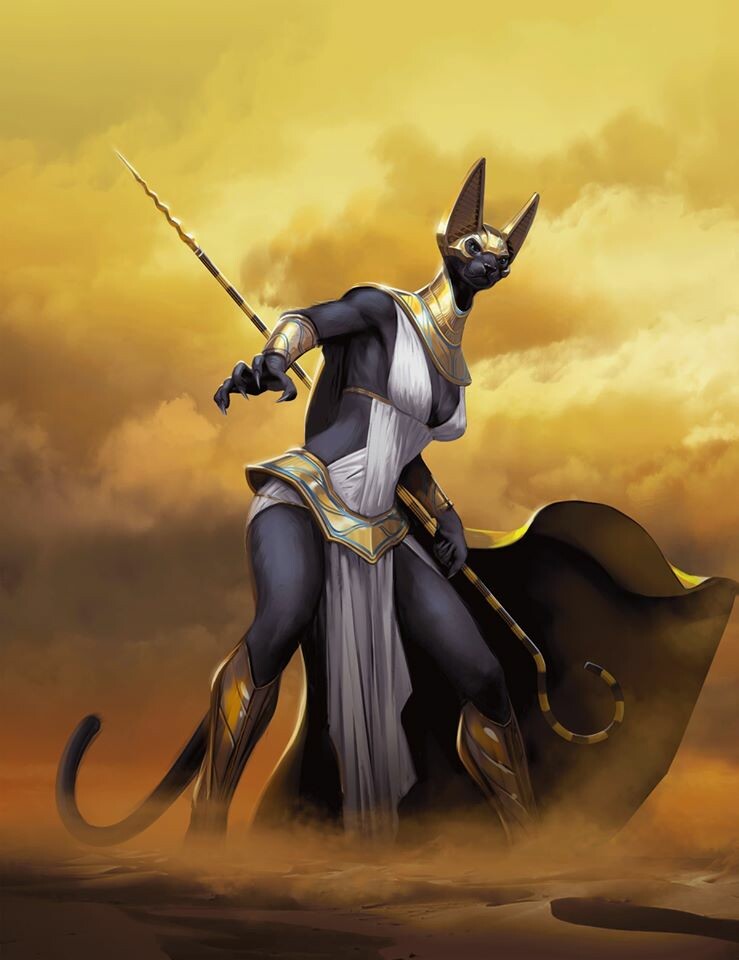 Bast (Bastet, Pasht) In Egyptian mythology, cat goddess worshipped at Bubastis in the eastern delta. She was looked upon as a manifestation of the solar eye and was even referred to as “the Eye of Ra who protects her father Ra.” Bast, who loved music and dance, was the protector of pregnant women and also protected men against disease and evil spirits. Generally, she was considered the personification of the beneficial, fertilizing power of the sun, whereas her counterpart, Sekhmet, the lion goddess, represented the fierce, destructive power of the sun.

Bast became an important national deity about 950 b.c.e., and her festival was among the most popular in Egypt. According to Herodotus’s History (book 2), vast numbers of men and women came to her festival by barge, singing and dancing, clapping their hands, and playing the castanets. On their way the women would shout abuses and even expose themselves to those along the shore. At Bubastis the feast was celebrated with abundant sacrifices and festivities. Dead cats were carefully mummified and buried. It was said that more than 700,000 devotees attended Bast’s yearly festival and that more wine was consumed than in all of the rest of the year besides.

In the Bible the Hebrew prophet Ezekiel (30:17) refers to Bast’s city, which he calls Phibeseth, and says of Bast’s worshippers that the young men will “fall by the sword” for their worship of her.

Bastet offers special protection to women and children and serves as matron of magicians and healers. Her cult began in the Nile Delta swamps. The earliest known portrait of Bastet dates to circa 3,000 BCE. By about 950 BCE, she was worshipped throughout Egypt. For a while, she was the most popular goddess in the kingdom. Her veneration reached its zenith during the reign of Osorkon II (874–853 BCE), when a major temple was erected at her cult city, Bubastis. Devotion to Bastet officially survived until 30 BCE and the Roman conquest, the Romans having little sympathy for animal-shaped gods.

Her annual festival in Bubastis was Egypt’s most popular. A precursor of modern Mardi Gras, it was renowned for parties, revelry, and drunkenness. Herodotus, the Greek traveller and historian writing in the fifth century BCE, claimed that more wine was consumed in Egypt during this festival than during the entire rest of the year. Although many details are lost, Bastet’s festival celebrated female sexuality and generative power. Boats sailed up the Nile toward Bubastis. As each barge approached towns and settlements, it would halt and the mainly female celebrants on board would loudly hail local women congregating on the riverbanks. They would shout sexual obscenities to each other, dance wildly, and perform anasuromai, the ritual act of lifting up the skirts to expose the vulva, associated with laughter, healing, and defiance of grief.

Bastet may be the wife and/or daughter of Ra, the sun. Among the spirits described as her sons are Maahes, Khonsu, and Nefertem.

She is depicted as a cat, often bejeweled, or as a woman with a cat’s head, sometimes surrounded by kittens and fashionably dressed in a green or blue dress.

Basket and ankh (symbol of life)

Domestic cats are her servants and sacred animals.

Her name may be related to a word meaning “perfume.” Ancient Egyptian perfume was typically in the form of a salve. Offer her precious cream perfumes or offerings that benefit her sacred animal, cats.

Khonsu is described as Bastet’s son or as the son of Ammon and Mut or Sobek and Hathor. Spirit of the moon, when he causes…

Sakhmet (Sekhmet, Sechmet, Sekhait, Sekhauit, Skhautet, Sekhem) (the powerful one) In Egyptian mythology, the lion goddess, honored as goddess of war; called Sakhmis by the…

Wadjet – Lady of Flame; Lady of the North; Lady of Heaven; Queen of Holy Spirits Wadjet is a cobra goddess. Originally the guardian of…

Nefertem is the lord of fragrance and perfume. He reminds us that perfume can be more than just a pleasant fragrance. He presides over ritual,…

Bes Dancing ORIGIN: Egypt or Nubia Bes, spirit of domestic happiness, lord of love, music, and dancing, was among the most beloved popular deities of…