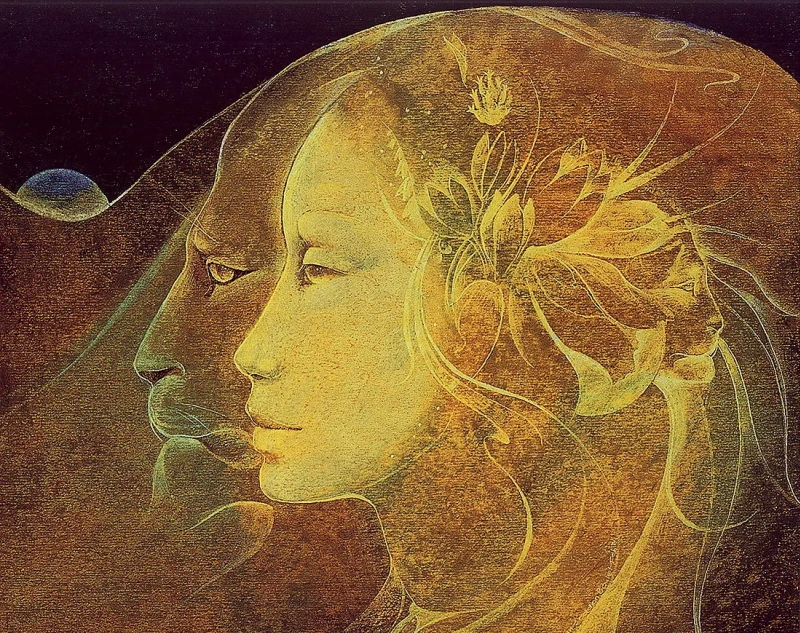 Sakhmet (Sekhmet, Sechmet, Sekhait, Sekhauit, Skhautet, Sekhem) (the powerful one) In Egyptian mythology, the lion goddess, honored as goddess of war; called Sakhmis by the Greeks. She was the consort of the god Ptah, and together with their son Nefertem they formed the divine triad of gods worshipped at Memphis. Death came into the world when the Eye of Ra was sent down to Sakhmet to punish a rebellious humanity. In Egyptian art Sakhmet is often depicted as a woman with the head of a lioness, which is surmounted by the solar disk encircled by a uraeus. The numerous images of the lioness goddess in hardstone that are often found in museums throughout the world represent Sakhmet and were all originally found in the precinct of the goddess Mut in southern Karnak. It is assumed by scholars that there were two images of Sakhmet for each day of the year to which prayers were addressed to gain her favour.

The Mighty One; Great of Magic; Lady of Terror; Lady of Action; The One Before Whom Evil Flees; Mistress Dread; Lady of Flame; The Scarlet Woman

Sekhmet, lioness goddess, epitomizes the blazing, scorching power of the sun. She is a goddess of war, justice, destruction, and healing. Her name may derive from a root word meaning “to be strong, powerful, mighty, or violent.” Sekhmet is among the fiery manifestations of the Eye of Ra.

She is a fierce guardian goddess of Upper Egypt. Her hot breath created the desert. Sekhmet was associated with plagues and pestilential diseases: illnesses that blew in on desert winds. Sensational descriptions of Sekhmet tend to emphasize her destructive aspects, but she was also among Egypt’s most significant healing deities and remains an active healer today.

Most spirits must be asked before they will openly intervene in someone’s life. (It’s possible that many perform acts of rescue anonymously). Sekhmet, however, is renowned for appearing in dreams and visions in order to perform successful healings. No one summoned her, at least not consciously. Instead. Sekhmet recognized a need and personally took the initiative. (Sekhmet appears when invoked too.) If Sekhmet heals you without first being asked, offerings are in order. Sometimes this is a one-time favour but it may also be her way of extending matronage. If you wish to accept her offer, then create an altar or make some other gesture of acknowledgment.

Sekhmet heals all illnesses except those of the eyes. She is associated with blood ailments. She has dominion over the menstrual cycle and women’s reproductive systems. Sekhmet should not be bothered for trifles, but she is an intensely powerful and proactive healer. She is the matron goddess of reiki. Some theorize that Sekhmet is an emanation of the primordial goddess Hathor who first emerged in a time of crisis and took on a life of her own, similar to the relationship between Indian goddesses Kali and Durga. Just as Shiva is able to halt Kali’s dance of destruction, so Lord Thoth is able to pacify Sekhmet, something to keep in mind, just in case.

Sekhmet manifests as a woman with a lion’s head or as a lioness.

Sekhmet is depicted crowned with a solar disc encircled by a uraeus (upright cobra, symbolic of divine authority). Many Sekhmet statues survive perhaps because there were so many to begin with. Temple priestesses allegedly made offerings before a different statue each day of the year. Legend suggests that her statues were especially protected because of the aggressive nature of the deity and also because they were coated with anthrax or other highly infectious bacterial powder to ensure that they were not disturbed.

A two headed snake; Sekhmet holds one head in each hand. Also arrows

Beer by itself or blended with pomegranate juice; arrows; silver medical tools; incense.

Nefertem is the lord of fragrance and perfume. He reminds us that perfume can be more than just a pleasant fragrance. He presides over ritual,…

Mut Lady of Heaven; Queen of Deities; Mother of the Mothers ORIGIN: Egypt Her name means “Mom.” Mut, the vulture goddess, is the spirit of…

Bast (Bastet, Pasht) In Egyptian mythology, cat goddess worshipped at Bubastis in the eastern delta. She was looked upon as a manifestation of the solar…

GODDESS HATHOR IN FRONT OF THE TEMPLE OF ABU SIMBEL Hathor – The Great One of Many Names; The Golden One; Lady of Malachite, Lady…