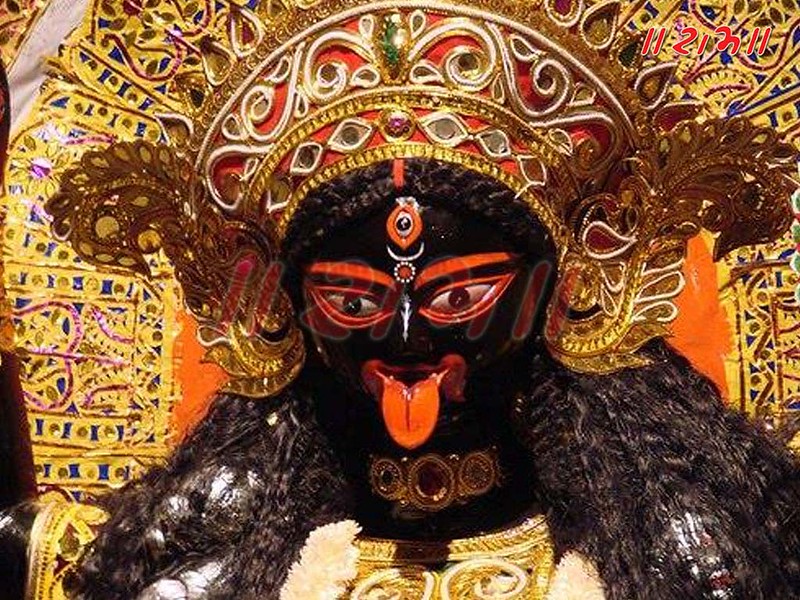 Kali is India’s Great Mother: goddess of time; creation; destruction and contradictions. Kali was a tribal goddess prior to the Aryan invasions, which brought Vedic traditions and Hinduism to India. Her veneration was so persistent, enduring and significant that she was eventually incorporated into the Hindu pantheon as one of its most powerful deities. According to myth, when all the other deities were stymied by a Demon, Kali emerged as an independent emanation of the goddess Durga. Kali is an unstoppable force: she handily defeated that Demon but was then unable to stop her whirling dance of destruction. The entire world would have been destroyed had not Shiva, her beloved, thrown himself at her feet, risking his own death but snapping her out of her rampage.

Kali births and destroys her children. She is the Corn Mother who simultaneously grinds out life and death. Her name may be interpreted as having to do with time but it literally means black as in Earth’s fertile black soil or as in black holes, those regions of space whose gravitational pull is so intense that nothing can escape. Reputedly the most difficult of all spirits to understand, Kali’s devotees claim that attempts to comprehend her will free you of all fear. Her stereotype depicts her as a scary, bloodthirsty, out-of-control Demon. She was notorious as the spirit venerated by the now infamous Thuggees, secret fraternities of thieves who may have strangled victims in her honor. However, Thuggees were always but a tiny minority of her following. Sensationalized descriptions of Kali tend to overlook the tremendous blessings she brings: bestowing protection; good health; abundanceand fertility on her devotees.

Kali is among the most widely venerated spirits on Earth; worshipped by millions of Hindus as well as by many others including (unofficially) many Indian Mus lims. She is also venerated by independent practitioners and goddess-devotees worldwide. The Indian Diaspora brought Kali to the Caribbean, where she is now also incorporated into various Obeah traditions.

Kali’s association with time may indicate her primordial nature. She may have existed since the beginning of time and is possibly a form of the primeval Earth woman or Dirt Woman.

Fiercest of the fierce, Kali backs away from nothing. To fully appreciate joy and life, suffering and death must be faced. Kali is responsible for life from conception to the grave. She maintains world order. Kali protects the helpless, particularly women and children. She is the Matron of Witches. Her attendant spirits are the Dakinis. Kali is the chief Dakini and is sometimes called Dakini.

Kali is not a remote deity but has intense personal relationships with individual devotees. Kali appears frequently in dreams and visualizations and is also channeled by spirit mediums. She may offer instruction in yoga or various mystic, esoteric arts.

Folk tradition suggests that people with pointy tongues have been touched or called by Kali and may consider themselves under her sponsorship and protection.

Sometimes her appearance is consistent to her iconography: she has jet black or midnight blue skin and a fierce or loving expression. Her hair may form one-hundred locks. She may dance or twirl. Kali is described as appearing in the form of brilliant light or a deep black void. She may manifest in the form of cholera or a jackal-headed woman.

Her images are frequently but not always intended to terrify. A standard votive image shows Kali’s smiling or grimacing face with fanglike teeth. Her tongue sticks out. She has three eyes and wild, disheveled hair. She wears a necklace of severed human heads, still dripping blood and a girdle of severed human hands. Her earrings are children’s corpses. She wears cobras as garlands and bracelets. Her mouth is smeared with blood. She is adorned with gems possessing the celestial brilliance of the sun and moon and usually depicted with four hands, Demonstrating her contradictions: two are involved with destruction; the other two confer blessings and protection:

• The left hands hold a severed head and a bloody scimitar.

Kali is frequently depicted together with her beloved Shiva. Typically she stands upon his prone body or they are shown in sexual union. One famous image shows Kali squatting over Shiva’s prone body devouring his entrails while simultaneously offering him her breast.

Mirror; black cauldron; a chalice containing blood from a head she has severed; she may drink from a skull.

Kali promised to bless anyone who offered her red hibiscus flowers.

The sages of Tantra taught that when we follow the path of Shakti, the sacred feminine principle personified by the goddesses of yoga, we awaken…

Encountering Kali explores one of the most remarkable divinities the world has seen―the Hindu goddess Kali. She is simultaneously understood as a blood-thirsty warrior, a…

Chandi – Queen of Dust Chandi, goddess of birth and death, is a tribal and village goddess partially incorporated into the Hindu pantheon. She is…

Sara La Kali : The Black Queen Every May, the mysterious Sara La Kali is the subject of the largest annual Romani (Gypsy) pilgrimage. She…

Durga The Unconquerable One; The Invincible; The One Who Eliminates Suffering ORIGIN: India An immensely popular and beloved goddess, Durga, originally a ferocious tribal spirit,…