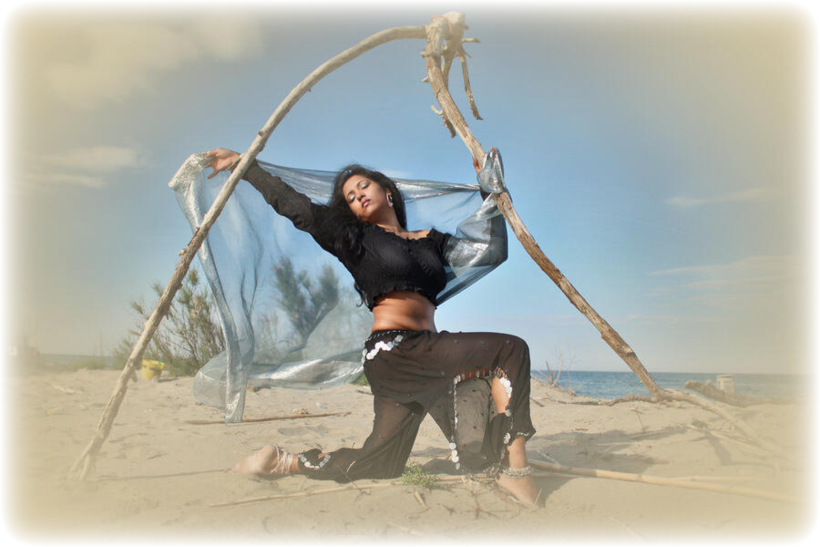 Every May, the mysterious Sara La Kali is the subject of the largest annual Romani (Gypsy) pilgrimage. She is the single most significant sacred being venerated by the Roma, who flock to her shrine from around the world. Her identity is subject to strenuous debate:

• She may be the Egyptian servant who accompanied the three Marys (Mary Magdalen, Mary Jacobe, and Mary Salomé) to France.

• She may be a Romani priestess who greeted them upon their arrival in Provence.

• She may be the daughter of Mary Magdalen and Jesus Christ.

• She may be the Black Madonna.

• She may be the goddess Isis.

• She may be the goddess Kali, who accompanied the Romani from their origins in India.

Sara La Kali (Sara e Kali in Romani) literally means “Sara the Black”. Her name is spelled “Sarah” and “Sara” interchangeably, although the addition of the “h” may serve to obliquely indicate Semitic roots and hint at her secret identity as the daughter of Jesus.

Although commonly addressed as “Saint Sarah”, in fact she is not a canonized saint. Her remains are in the crypt, not in the church itself. For centuries she was publicly venerated only by the Romani. In recent years, however, she has emerged as an international goddess.

An ancient rumour suggests that the three Marys, Sara, Saint Martha, and Joseph of Arimathea escaped the fall of Judea by travelling together to France. King René of Anjou (1409–1480) decided to investigate. He ordered excavations: the supposed relics of Saints Mary Jacobe and Mary Salomé were discovered beneath the choir of a primitive church. Human remains identified as belonging to Sara were found in a bronze chest. Pilgrimages began in the fifteenth century (coinciding with Romani migrations through Western Europe).

Sara La Kali may be petitioned for anything, but her specialties are healing and fertility. Author Isabel Fonseca describes her as the Romani goddess of fate.

During her festival, the statue is carried in procession to the sea where it is immersed and bathed. Once brought back to her shrine, she is dressed in finery.

Sara’s statue is carved from dark brown wood. She is crowned and has long black hair and powerfully expressive eyes. In some Romani fortune-telling systems, the Justice Tarot card indicates the influence of Sara and may be used to represent her as may a black queen chess piece.

Her shrine in the French town of Les-Saintes-Maries-de-la-Mer.

Her feast is held 13 July; she shares a pilgrimage at the end of May with Mary Salomé and Mary Jacobe

It is traditional to place clothing belonging to those suffering from illness or in need of healing on Sara’s statue. As the fabric absorbs the deity’s power, healing is transmitted to the petitioner, who may have attended the festival or who may be far away. Sara La Kali is also offered milagros (ex-votos) and valuable gifts.

Maries de la Mer, Saintes ALSO KNOWN AS: Three Ladies of Egypt; Saint Marys of the Sea Sometime after the crucifixion of Jesus circa 33…

Macarena, La The Madonna of Hope; La Esperanza La Macarena is a mysterious, beautiful, powerful Madonna. Her true title is Our Lady of Hope or…

Kali is India’s Great Mother: goddess of time; creation; destruction and contradictions. Kali was a tribal goddess prior to the Aryan invasions, which brought Vedic…

The sages of Tantra taught that when we follow the path of Shakti, the sacred feminine principle personified by the goddesses of yoga, we awaken…