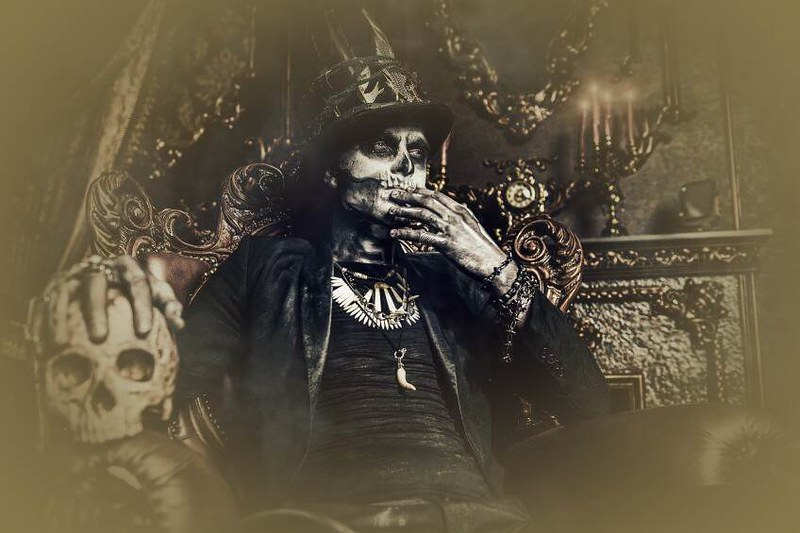 Baron Samedi : Master of the Cemetery

Baron Samedi is the leader of the Barons and possibly the Gedés. He presides over a sprawling, confusing, complex clan of spirits. When people speak of the Baron, they tend to mean Baron Samedi. Baron Samedi literally means Baron Saturday, which may sound innocuous compared to Baron Cemetery or Kriminel, but Saturday was the one day when Christ was really, truly dead, the day between the crucifixion on Friday and resurrection on Sunday. On Saturday, even Jesus must answer to the Baron, Lord of the Dead. (An alternative explanation suggests that Samedi is related to Simbi or zombi and only resembles the French word.)

Baron Samedi is Grand Master of the Celestial Masonic Lodge of Vodou Spirits, a thirty-second-degree-initiated Mason. He is invoked to contact and communicate with the dead (he determines whether they can come visit or not). He may be petitioned to remove bothersome ghosts and invoked to ward off death.

He a powerful healer and is especially sympathetic to terminally ill children. Baron Samedi rules the cemetery: no one can die until he gives permission for their grave to be dug. Baron Samedi is lewd, obscene, and vulgar, but he can be just and kind. He prefers that children live full lives before joining him in the cemetery.

Baron Samedi is the crossroads where sex and death meet. Spirit of the undying life-force, he may be petitioned for fertility. He is the guardian of ancestral knowledge and the link to your ancestral spirits. If one lens keeps popping out of your dark glasses, the Baron may be seeking your attention or offering his patronage.

Children; women seeking to conceive; funeral workers; grave diggers; those whose work brings them into contact with death

Baron Samedi’s manifests as an older, dark-skinned man in formal attire, dressed completely in black. He wears a black top hat, black suit, and may be smoking one of his beloved cigars. He wears impenetrable black sunglasses:

• The glasses may be missing a lens because he possesses two kinds of vision: he simultaneously sees the realms of the living and the dead.

• Alternatively his glasses have but one lens because a penis has but one eye and the phallus is his attribute (and because he loves sexual humor and innuendo).

Baron Samedi’s throne is a chair chained to a cross. Images of Darth Vader are used to represent him (or just to decorate his altar; he likes toys).

Black coffee, plain bread, dry toast, roasted peanuts. He drinks rum in which twenty-one very hot peppers have been steeped. Cigars, cigarettes, dark sunglasses, Day of the Dead toys, the sexier and more macabre the better; raise a skull and crossbones pirate flag for him; beautiful wrought-iron crosses are crafted in his honor.

Twilight tends to be a good time to invoke him or make requests.

Madame Brigitte; they may be petitioned together for fertility, protection, or to save ailing children.

Baron LaCroix, Baron Samedi’s brother, is the cemetery groundskeeper: he maintains the graves. He is generally not invoked but avoided as he allegedly kills on…

Papa Gedé is the leader of the Gedés, landlord of the cemetery, its spiritual superintendent. Some people use this name to indicate Baron Samedi. Some…

Brigitte, Madame Madame Brigitte is Queen of the Cemetery and Spirit World. She is married to Baron Samedi and is venerated and petitioned alongside him,…