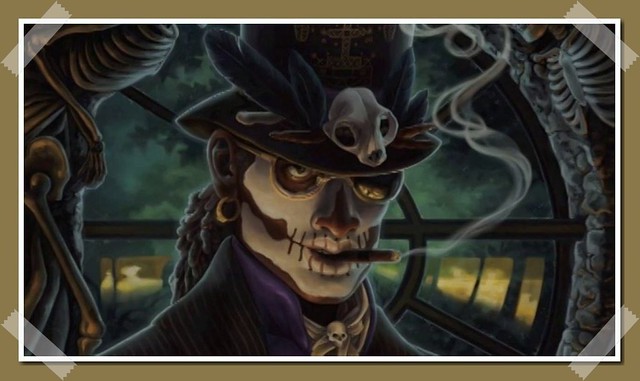 Papa Gedé is the leader of the Gedés, landlord of the cemetery, its spiritual superintendent. Some people use this name to indicate Baron Samedi. Some consider Baron Samedi to be Papa Gedé, leader of the Gedés as he is of the Barons. However Baron Samedi is a very distinct spirit. Once you know him, it’s hard not to recognize him. There is also another spirit called Papa Gedé who does not dress or act like the Baron but plays the shambling buffoon. (He’s not; don’t be fooled. He’s a powerful spirit wearing a guise, but the guise he consistently wears is of a socially disreputable, aggravating bumpkin.) That Papa Gedé is the leader of the Gedés. Whether he reports to Baron Samedi or not is between them. Papa Gedé adores Ezili Freda Dahomey. Sometimes she tolerates him.

If you have business in the cemetery, especially of a magical nature, it may be best to propitiate Papa Gedé. If you are planning any sort of expedition or excavation (digging for graveyard dirt; taking cemetery rocks, communing with the dead, raising the dead), it might be wise to give him a heads-up. He is the custodian of the graveyard: if you seek information regarding someone who has passed over, Papa Gedé has it.

He does not particularly like fire, but he does like cigarettes, which he may smoke two at a time. Bring him a pack and something to drink.