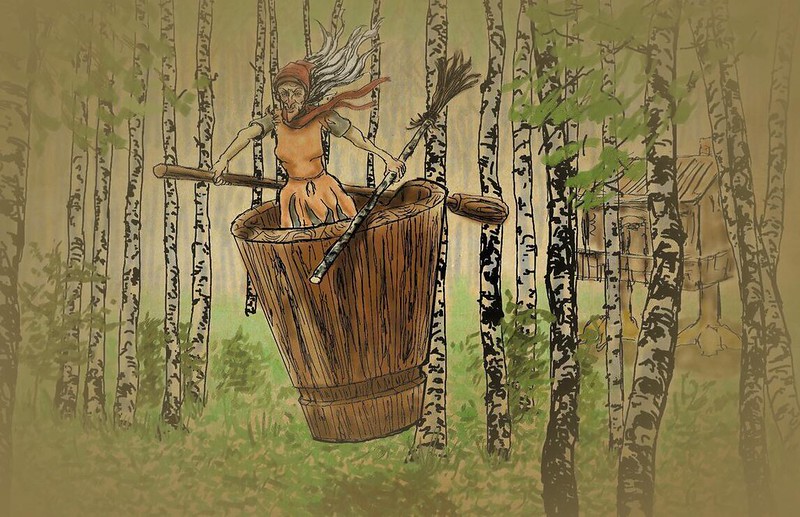 Baba Yaga is in Russian folklore, a female witch who loved to roast and eat people, preferably children. She was as likely to pop a niece in the oven as she was a stranger. She lived in a little hut beyond a river of fire in the “thrice tenth kingdom.” The hut was ringed with stakes topped by human heads. It stood on chickens’ legs and dogs’ heels and turned on command.

Those who were brave enough to enter the hut usually found Baba Yaga lying on the floor with her right leg in one corner and her left leg in another, sometimes with her nose growing into the ceiling. The Bony-Legged One, as Baba Yaga often was called, would cackle at her guests, “Fie! Fie! I smell a Russian bone!” If she didn’t try to get them into the oven, she gave them advice.

Baba Yaga possessed a magic wand and flew in an iron mortar (cauldron) that she spurred on with a pestle as she swept away her tracks with a broom. She had two or three sisters, also called Baba Yaga.

Baba Yaga (Baba Jaga) (old woman) In Russian folklore, cannibalistic ogress who kidnaps children, then cooks and eats them. She is the best known of all Slavic legendary characters. She is mostly malevolent, but sometimes she is a benefactress. She is never portrayed as a goddess, but in her earliest form she shows similarity to the Great Goddess, the patron goddess to women.

Since the Christian era she has been downgraded to witch status. Baba Yaga usually lives in a hut that stands on hens’ legs. Sometimes it faces the forest, sometimes the path, and sometimes it moves about from place to place. In some Russian folktales Baba Yaga’s hut is surrounded by a railing made of sticks surmounted by human skulls, which glow at night from candles placed inside them.

One Russian folktale, simply titled “Baba Yaga,” tells of an evil stepmother who attempted to have her daughter eaten by Baba Yaga. The girl was saved when a magic comb thrown in Baba Yaga’s path made it impossible for the ogress to catch the girl as she escaped. In a variant tale, however, the girl was broken into little pieces and placed in a basket.

Anatol Liadov’s short symphonic poem Baba Yaga deals with the ogress, as does one section of Modest Moussorgsky’s Pictures at an Exhibition, also titled “Baba Yaga,” originally written for piano and transcribed for orchestra by Maurice Ravel in 1923.

Baba Yaga, goddess of birth and death, devolved into the bogeywoman of Russian fairy tales, a cannibal forest-witch, her name used to threaten children into obedience: “Be good or Baba Yaga will get you.” Baba Yaga doesn’t just eat children; sometimes she defends them by dispensing justice to evil step-mothers.

Baba may be petitioned for fertility by those who lack it. She allegedly knows every botanical healing secret in existence; whether or not she can be persuaded to reveal these secrets is another story. Baba Yaga is the Mistress of All Witches, Lady of the Beasts, the Primal Mother who rescues, nurtures, and destroys.

Witches, herbalists, heroes, and hardworking advocates for wild nature, but be cautioned: Baba Yaga has no patience with slackers, whiners, and ingrates of any persuasion.

Baba Yaga flies through the air in a mortar, steers with a pestle, sweeping away her traces with a broom. She has iron teeth that protrude like boar’s tusks. Her hands are tipped with bear claws. She wears a necklace of human skulls and likes to smoke a pipe. One of her legs may be distinctive: it may be formed of clay, gold, iron, or steel. Sometimes her leg is an iron pestle. (In other versions, she is a woman from the waist up, a snake from the waist down.)

Baba Yaga lives in the heart of a deep, birch forest in a little hut named Izbushka (literally “little hut”) that usually stands on stilt-like chicken’s feet but occasionally on goat’s legs or even on spindle heels. Baba Yaga’s hut obeys orders. Say “Izbushka, Izbushka! Stand with your back to the forest and your front to me” and it does as directed. The house is formed from bones, personally collected by Baba herself. The doorposts are leg bones; the lock is a sharp-toothed mouth; the bolt is a hand. The fence consists of bones crowned with skulls whose empty eye sockets glow in the dark. The house is dominated by an oven akin to a cauldron of regeneration, and Baba Yaga stories may be understood as tales of initiation, sometimes but not always successful.

All animals, but especially horses, hedgehogs, snakes, and dragons

Baba Yaga has a voracious appetite and gourmet taste. Offer her lavish homemade feasts of traditional Russian delicacies (blinis, coulibiac, pelmeny, and so forth). The more difficult and time-consuming the feast is to prepare, the more she will like it. Set the table beautifully for her. She also enjoys tobacco products. Baba Yaga drinks strong black Russian Caravan tea and vodka.

Baba Yaga is an ambiguous and fascinating figure. She appears in traditional Russian folktales as a monstrous and hungry cannibal, or as a canny inquisitor…

Tabiti ORIGIN: Scythian; Sarmatian Scythian and Sarmatian women may have been the legendary Amazons—mounted, armed women warriors. Tabiti was venerated by these nomadic cultures who…

Babushka-Lyagushka-Skakushka In Russian folklore this is “Grandmother Hopping Frog,” who lives in the Green Marsh. She is asked by Baba-Yaga to help Petrushka find the…