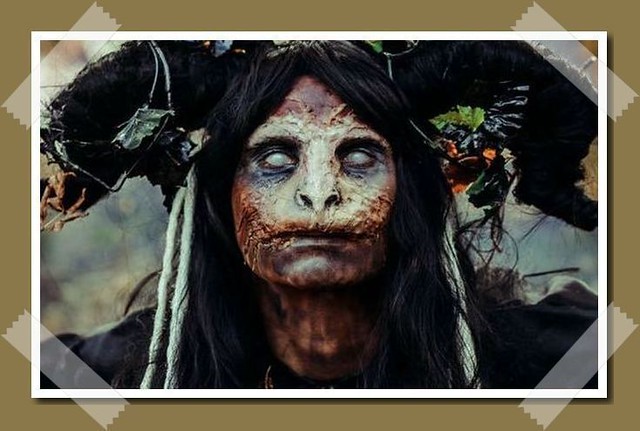 Ragana rules overnight, winter, birth, death, destruction, rebirth, and regeneration. She is a goddess of fertility, abundance, and menopause, which begins with the touch of her red wand. Ragana the prophetess sees all, knows all, and is all powerful. She is a goddess of death and a master healer who can allegedly cure any illness or ailment.

Ragana can bless or curse. She controls fertility and the milk supply of women and animals. She causes and cures infertility and impotence. Ragana controls the weather, raising and allaying storms, and wind. She is the guardian of nature’s cycles: creation, growth, decline, and destruction. Ragana may be understood as a spirit of balance. Even her negative powers may be understood as a blessing. Ragana halts the sun’s ascent after the Summer Solstice. What would happen if the sun’s power was left unchecked? If after the Summer Solstice, the sun’s power only increased?

• There may be one goddess Ragana.

• There may be a family of closely related spirits all called Ragana.

• There may be one goddess Ragana plus her entourage of handmaidens, lesser but still formidable spirits who are called Raganas.

• Ragana’s mortal priestesses and devotees are also known as Ragana.

In modern Latvia and Lithuania, the word ragana literally means “witch” (and not in the most positive sense of that word!). According to Lithuanian folklore, witches fly off to hilltops to rendezvous with Ragana on her holy night, the Winter Solstice.

Ragana cuts ice holes in frozen lakes to bathe in icy water. Ragana rarely walks. She flies by transforming into a bird or riding a stick, branch, or tree stump. Ragana is a seer. She doesn’t necessarily wish to be seen. Woe to men who surprise her and her handmaidens, especially if caught bathing, dancing, cavorting, celebrating, or otherwise in ritual. First Ragana and Raganas devour men sexually; then they literally devour them. (This myth of Ragana raises questions regarding the true identity of the hounds who consumed Actaeon after he interrupted Artemis and her Nymphs bathing.)

Ragana was Demonized long before the arrival of Christianity in the region. Venerated prior to the arrival of Indo-Europeans, she was never assimilated or incorporated into their pantheon in which male deities like Perkunas play dominant roles. Pre-Indo-European goddesses were assimilated by marriage to these deities. Ragana, apparently not ideal wife material, was not married to any of them. Author Vilija Vyté in the book Of Gods and Holidays: The Baltic Heritage describes Ragana as the “patriarchy’s nightmare.”

Following the arrival of Christianity, her image only got worse: Ragana was demoted to a witch who allegedly brings misfortune to humans and animals, a warning perhaps intended to make devotees stop venerating her. Fairy tales often portray Ragana as grotesque. Stories simultaneously celebrate and warn against her. Like her Russian soul sister, Baba Yaga, Ragana may be portrayed as a cannibal, yet her spiritual appeal and hold remain powerful. Ragana is invoked in positive and malevolent magic. Spells and incantations attempt to focus (or redirect!) her legendary destructive powers against the spell caster’s enemies. She is an increasingly popular Neo-Pagan goddess.

Ragana’s power manifests in plants that heal, poison, or kill.

Winter Solstice and Summer Solstice— at the peak of Saulé’s power, Ragana begins the waning of the year: it is Ragana’s moment of glory, too.

Ragana is traditionally given the first eggs of spring, a hunter’s first catch in spring, butter, cheese, hair, sheep’s wool, and menstrual blood.

Laumès ORIGIN: Baltic The Laumès are beautiful Baltic Fairies. They have power over wealth, abundance and fertility, which they bestow or remove as they desire.…

ARTEMIS : MISTRESS OF ANIMALS; SHE OF THE WILD; MOST BEAUTIFUL; LADY OF MANY SHRINES AND MANY CITIES; LADY OF THE WILD MOUNTAINS; OPENER OF…

Baba Yaga is in Russian folklore, a female witch who loved to roast and eat people, preferably children. She was as likely to pop a…

A rusalka is in Russian folklore, the spirit of a maiden who drowns by accident or by force and becomes a Ghost who haunts the…