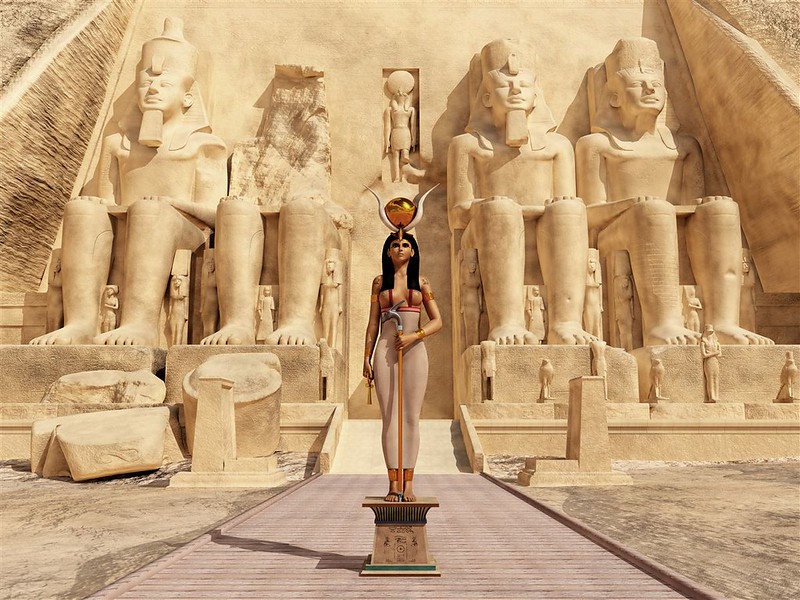 GODDESS HATHOR IN FRONT OF THE TEMPLE OF ABU SIMBEL

Hathor is the matron goddess of women; the guardian of females of all species. She is the embodiment of the female principle. Hathor is the spirit of joy, love, dance, alcohol, and perfume. A primordial spirit, she has dominion over sex, birth, pleasure, intoxication, magic, music, and death. Hathor has dominion over human reproduction and the fruits of love making.

Hathor is the celestial cow; the Milky Way spills from her breasts. One of the most ancient Egyptian luminaries, her veneration extended as far as Ethiopia, Somalia, Libya, and Phoenicia. Hathor may or may not be the same spirit as Lady Asherah of the Sea, with whom she shares dominion of the Sinai Peninsula.

Without Hathor’s assistance and protection, the dead cannot reach their next realm nor achieve everlasting life.

Hathor most often manifests as a cow with the solar disk and plumes between her horns or as a woman whose crown is a solar disk held between a pair of cow horns. However, Hathor is a talented shape-shifter, capable of showing herself in any form she chooses. She manifests in various forms depending upon her mood. Historically, she has appeared as a cat, falcon, fig tree, vulture, hippopotamus, and cobra. At her most ferocious, she is a lioness. When in human form, Hathor is consistently kind and beautiful. She manifested as a snake spirit in Byblos, now modern Lebanon.

A tree with a woman’s breast, with which she nourishes pharaohs. A jar from Tutankhamun’s tomb depicts Hathor wearing a necklace of water lilies and mandrake fruit.

Mirror, frame drum, and sistrum: the sistrum, a percussion instrument, is sometimes decorated with Hathor’s image, as are Egyptian hand mirrors.

Moon. Hathor also has associations with the Dog Star, Sirius, which the Egyptians called Sothis, the Great Provider, also known as the Womb of Hathor. She may also have a solar aspect.

Unlike huge temple complexes, which were largely inaccessible to all but the pharaoh and the priestly elite, most Hathor sanctuaries were places where anyone could offer a petition. Hathor’s principal sanctuary was at Dendera, on the edge of the desert between Luxor and Abydos, where it is believed her cult first began. The present ruins date from a temple completed in the first century CE. However, according to inscriptions, the site had already been sacred to Hathor for ten thousand years; the original temple was a mud hut. Dendera was a healing center, the Lourdes of its day. The Egyptians considered it the Navel of the Universe, Earth’s spiritual center.

• Hathor was worshipped in the Deir el-Bahri area since at least the First Intermediate Period (2150–2040 BCE), possibly originally in a cave shrine.

• Hathor owns the mountain range to the west of the Nile River.

• Marshes are sacred to Hathor.

• She owns the Sinai Peninsula. Many statues of her have been found there as well as in Israel. Some scholars think that the biblical Golden Calf is Hathor’s son. Descriptions of fierce, warlike nomads enslaved by the Egyptians and forced to tend Hathor’s shrines in the Sinai may be the earliest written references to the Hebrew people.

Hathor is a famed shape-shifter. The Seven Hathors may he aspects or avatars of Hathor, hut they may also he her daughters or attendant spirits. They appear at hirths to pronounce the hahy’s destiny. It is unknown whether food offerings were given to them, although this was custoMary in Egyptian tradition. They were, however, offered seven red rihhons, one for each Hathor. The Seven Hathors may he the earliest documented evidence of birth Fairies. They were associated with the Pleiades. ( See Also: Fairy, Birth.)

An annual festival of appeasement was timed to correspond with the rising of Sothis (Sirius) and works out to roughly 20 July by our calendar. Hathor was offered copious amounts of beer and pomegranate juice, shared by celebrating devotees.

Burn myrrh to summon Hathor. She enjoys a joyful atmosphere, full of music and dance. She plays the frame drum and will communicate through drumming.

Amentat : Lady of the West Amentat is the friendly spirit who welcomes dead souls to the ancient Egyptian realm of the dead, Amenty, the…

Khonsu is described as Bastet’s son or as the son of Ammon and Mut or Sobek and Hathor. Spirit of the moon, when he causes…

Anat-Bethel ORIGIN: Jewish Anat was venerated side-by-side with YHWH. In this path she is known as Anat-Bethel. It is unclear whether the epithet Bethel specifically…

Astarte (also Ashtart, Ashtoreth) In ancient Phoenicia, the great Goddess of fertility, motherhood and war. She is the counterpart to the Babylonian goddess Ishtar and…