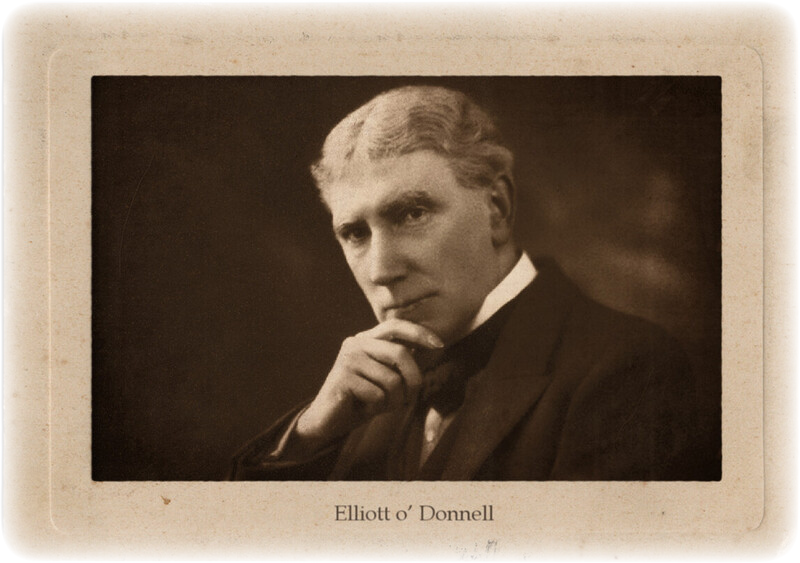 Elliott o’ Donnell –1965) was an English ghost hunter who gained fame through his more than 50 books on ghosts and related occult lore. Most of O’Donnell’s books were nonfiction, though he did write some occult fiction. Critics believe that his fiction crept into his nonfiction, and that his “true” ghost tales were embellished by fancy.

O’Donnell was born in England to a family that claimed to be descendants of famous Irish chieftains, including Niall of the Nine Hostages and Red Hugh, the latter of whom fought fiercely against the English in the 16th century. O’Donnell was educated at Clifton College in Bristol, England, and at the Queen’s Service Academy in Dublin. After school, he went to America for a time; he worked on a ranch in Oregon and then as a policeman in Chicago during the Railway Strike of 1894. He returned to England and worked as a schoolmaster while training for the theater. His first book, an occult novel, For Satan’s Sake, was published in 1905. When World War I erupted, he joined the British Army. After the war, he acted on stage and in film.

O’Donnell wrote other occult novels and eventually became an amateur ghost hunter, investigating Hauntings and collecting occult stories, which he chronicled in his nonfiction books. He also wrote numerous articles. His writings gained him great popularity on both sides of the Atlantic. He lectured often and made radio and television appearances in Britain and the United States.

O’Donnell believed in Ghosts but not Spiritualism; he wrote a book entitled The Menace of Spiritualism, published in 1934.

O’Donnell’s interest in the paranormal actually may have been driven by his own paranormal experiences. In 1899, he and his two sisters, Helena and Petronella, wrote letters to the Society for Psychical Research (SPR), of which he was a member, describing various experiences involving Apparitions, a DOPPELGANGER, Poltergeist activity, and even a Banshee. The SPR published them in the October 1899 issue of its Journal. The letters were republished in 2006 in the autumn newsletter of THE Ghost Club.

O’Donnell told the SPR that his father had made himself known after death through poltergeist disturbances. In 1873, Reverend Henry O’Donnell left England on a trip to Jerusalem. He was accompanied by a man who later was revealed to be involved with a swindling gang. Prior to his departure, he told his wife that if anything happened to him, he would make himself known, not by appearing to her but by making a terrible noise. This worried Mrs. O’Donnell, who was prone to superstitions.

Reverend O’Donnell was found dead of apparent sunstroke on April 2, 1873, in the village of Achibo. The circumstances of his death were suspicious, but nothing was ever proved. The swindler disappeared, along with all of Reverend O’Donnell’s possessions.

From the time of his death until July 1873, the O’Donnell house was in a poltergeist uproar every night at midnight. The sounds of furniture being thrown about emanated from the hall and tramping footsteps were heard upstairs. A reflection of a lit candle showed beneath the door of the nursery and its bolted door flew open violently.

Mrs. O’Donnell had the house barred and bolted every night, but the disturbances took place nonetheless. Mrs. O’Donnell died in January 1881. On the night of her burial, at about midnight, servants heard what seemed to be the footsteps of Mrs. O’Donnell sounding in the house. The room in which her corpse had been laid out was locked, but somehow the door opened and then closed with a loud bang. A few days later, the cook saw an apparition of Mrs. O’Donnell on the stairs landing.

O’Donnell told the SPR that when he was a fiveyear- old child, he saw a strange-looking man enter his bedroom one night when he was in bed. The man was ugly and covered with spots. He peeked at O’Donnell from around another bed, looking increasingly frightful. O’Donnell screamed and ducked under the covers, and when he looked out again, the figure had vanished.

In 1873, Petronella saw a disembodied, grotesque head floating over the bannisters of the stairs. It had a “horrid leer” and exuded evil. The head appeared at about the time a death occurred in the family, though Petronella did not know it until later. Seven years later, Helena saw a similar apparition.

In 1885, O’Donnell and his sisters were living with relatives in Newquay, Cornwall. One day all three children saw the doppelganger of a woman friend.

In 1896, when O’Donnell was in his early 20s, he saw a phantom cyclist while he was out cycling himself. The man in gray ran into the back of a cart and disappeared.

The SPR opined that the O’Donnell experiences exhibited family tendencies, even inherited, to project hallucinations that became “hauntings.” Only the doppelganger, seen by three persons, was considered to be an objective experience.

Corpse candles are Death Omens in the folklore of Wales and elsewhere in the British Isles. Corpse candles, or canwll corfe, as they are called in Welsh, are mysterious lights which bob over the ground and stop at houses or other sites where a death is imminent.

Phantom ships are reputed to haunt the Solway Firth. Elliott O’Donnell, writing in 1954 of ‘nasty sea ghosts’, says: One such story is of a…

Berry Pomeroy Castle is a haunted ruined castle in the wild countryside at Berry Pomeroy, Devon, England. The brooding ruins are said to be inhabited…