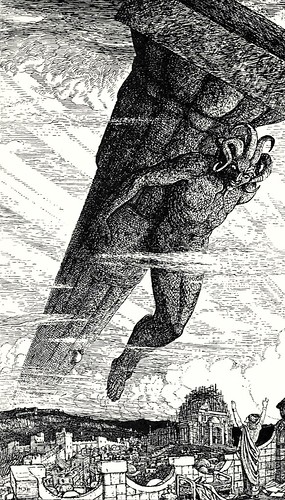 Ephippas is a Arabian wind Demon captured by King Solomon.

In the Testament of Solomon, Adarkes, the king of Arabia, asks Solomon for his help against a vicious wind Demon. The Demon appears every morning when a fresh wind starts and blows until the third hour. It kills man and beast and cannot be contained. Adarkes asks Solomon to send someone who can control the Demon. Solomon, however, forgets about the request until he has a problem with the construction of the Temple of Jerusalem. The stone that he wishes for a cornerstone is so heavy that all the artisans and Demon laborers cannot move it.

Solomon sends a servant out into the Arabian desert to capture the wind Demon in a leather flask. The servant places Solomon’s magic ring at the neck of the flask, which is a wineskin. When the Demon blows into it and fills it up, the servant seals it closed with the ring.

The local Arabs do not believe that the boy has actually contained the Demon, but when the wind does not blow for three days, they become convinced. The boy presents the flask to Solomon inside the temple. Solomon is astonished when the flask has the ability to move about on its own and takes seven steps, and then falls on its neck. Speaking from inside, the Demon gives his name as Ephippas and says he is thwarted by “the one who is going to be born from a virgin and crucified by the Jews” (Jesus).

Ephippas tells Solomon that he has the ability to move mountains, carry houses from place to place, and overthrow kings. Solomon bids him to move the cornerstone. The Demon says not only will he do that, but he will also raise up the pillar of air from the Red Sea and place it wherever the king wants. Ephippas inserts the cornerstone at the entrance of the temple. Solomon takes this as a profound sign according to Scripture: Psalm 118:22 says, “The stone which the builders rejected has become the head of the corner.”

Ephippas goes out with the Demon of the Red Sea, ABEZETHIBOU, to raise up the pillar. They have been outwitted by Solomon, who binds them to the pillar so that they remain suspended in air holding it up until the end of time. The pillar of air may be the same as the “pillar of cloud” referred to in the Old Testament and may mean the Milky Way.

An Abezethibou is a one-winged demon who lives in the Red Sea, plots against every wind under the heavens, and is the enemy of Moses.…

A Scepter is a Demon who appears in the form of a gigantic dog and who causes quartan fever. In The Testament of Solomon, Scepter…

The Head of the Dragons is a Demon in the form of a threeheaded dragon with awful skin. In the Testament of Solomon, the Head…

Lix Tetrax is a Fallen Angel and Demon of the wind. In the Testament of Solomon, Lix Tetrax is summoned to the presence of King…

Winged Dragon Fallen Angel and one of the 72 Spirits of Solomon. Winged Dragon has the limbs of a dragon, wings on its back and…