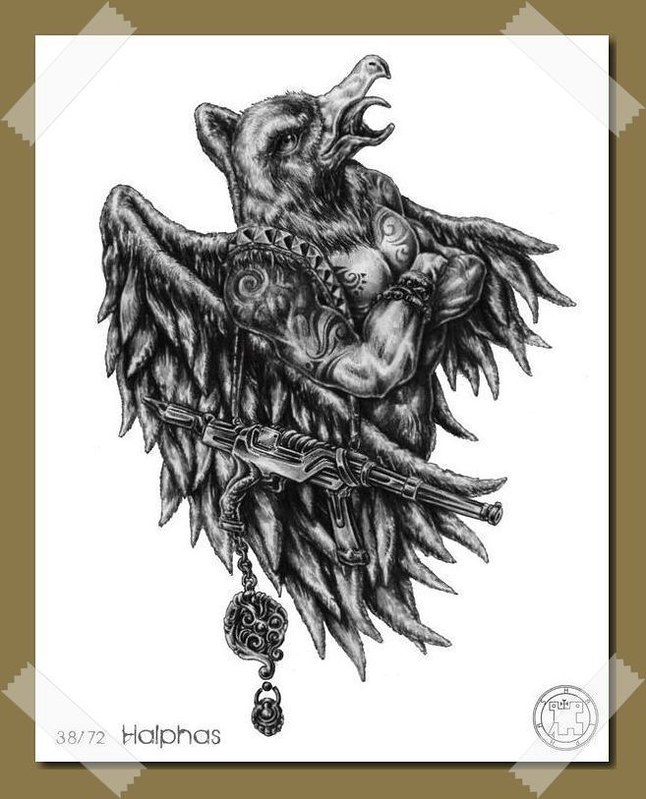 The Demon Halphas is a Fallen Angel and 38th of the 72 Spirits of Solomon. In Hell, Halphas is an earl who appears in the form of a stork and speaks with a hoarse voice. He burns towns; it is also said that he builds towns and fills them with armed men. Halphas takes swords to the wicked and sends men either to battlefields or to other places. He rules 26 Legions of Demons.

“Halphas or Malthus is the Thirty-eighth Spirit of Solomon, who appears as a Stock-Dove. Malthas (as it is also spelled) is a Great Earl, who speaks unto the magician with a hoarse voice. This spirit upon evocation in the black mirror, builds Towers and fortification surrounding the magician. This may be reflected in a spiritual manner, creating astral towers of which protect the magician from any attacks. Malthus furnishes the tower with weapons of war, he does send Spirits to fortify the tower, and they are excellent spirits for protection. He has 26 Legions of Spirits who may be summoned through him. In the Black Mirror, Halphas may be then invoked into the magician, as a part of recalling the spirit as an atavism. This will strengthen the mental aspect of the individual who seeks to create a solid essence of self which may not be attacked by spiritual means.”

HALPHAS, or MALTHUS. – The Thirty-eighth Spirit is Halphas, or Malthous (or Malthas). He is a Great Earl, and appeareth in the Form of a Stock-Dove. He speaketh with a hoarse Voice. His Office is to build up Towers, and to furnish them with Ammunition and Weapons, and to send Men-of-War19 to places appointed. He ruleth over 26 Legions of Spirits, and his Seal is this, etc.

Halphas is a great earle, and commeth abroad like a storke, with a hoarse voice, he notablie buildeth up townes full of munition and weapons, he sendeth men of warre to places appointed, and hath under him six and twentie legions.