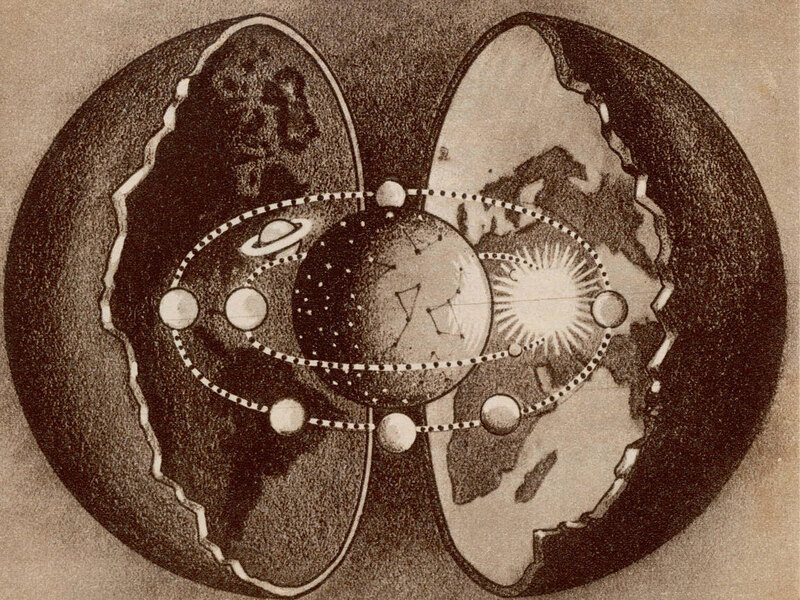 The hollow-Earth theory postulates that Earth has a hollow, inhabited centre. Believers in the hollow-Earth theory disagree on who these inhabitants are. The most common claim, however, is that the centre of Earth is home to an advanced race of humans, and these humans are the “aliens” behind UFO sightings and alien abduction experiences. The purpose of these abductions, some believers say, is so the hollow Earth beings can brainwash individual humans into helping them take over the civilizations on Earth’s surface. Other believers, however, say these abductions are intended merely to torture humans because the hollow Earth inhabitants are sadistic.

Origins of the Theory

The notion that UFO-piloting, sadistic “aliens” emerge from within the earth to abduct ordinary humans first appeared in tales published in the 1940s by Raymond A. Palmer. While the editor of Amazing Stories magazine, Palmer was contacted by a reader, Richard Sharpe Shaver, who claimed that he had ventured into the hollow-Earth realm and met its inhabitants. Shaver described three types of hollow-Earth beings: the Titans, technologically advanced giants who had lived on Earth’s surface until radiation forced them underground; the Deros, evil creatures whom the Titans had created through genetic engineering; and the Teros, heroic beings who, though small in number, were trying to destroy the evil Deros. According to Shaver, the human race was also the product of the Titans’ genetic engineering.

Palmer published many tales based on Shaver’s supposed adventures in the hollow-Earth realm. (Shaver’s name was on these stories, but they were actually ghostwritten by Palmer.) These stories, which appeared in Amazing Stories and its sister publication, Fantastic Adventures, further developed the public’s notions about a hollow Earth, but they also increasingly explored the evil, sadistic, and sexually perverse nature of the Deros. So many readers complained about these that in 1948 the magazines stopped publishing the material. Consequently, Palmer founded four other magazines to create venues for his hollow-Earth stories: Fate, Flying Saucers, Mystic (which later became Search), and the Hidden World, the latter of which was exclusively about the hollow Earth realm.

But although Palmer and Shaver developed the idea that inhabitants of a hollow-Earth realm were responsible for alien abductions, they did not create the notion that an advanced civilization was hidden within Earth’s core. Perhaps the first person to promote this idea was seventeenth-century British astronomer Edmund Halley, who suggested not only that the interior of Earth was populated but also that gases from this subterranean world were escaping through holes at the North and South Poles, thereby causing the aurora borealis and aurora australis, luminous atmospheric phenomena also called the northern and southern lights, respectively. In the early nineteenth century John Cleves Symmes so aggressively promoted the idea that there were holes at the poles that these supposed holes—each, according to Symmes, at least 4,000 miles (6,400km) wide—became known as Symmes’ Holes. He also unsuccessfully tried to find sponsors for an expedition into the hollow-Earth realm by way of one of the poles so that he could establish trade with the subterranean civilization.

Also in the nineteenth century, Cyrus Reed Teed gave numerous speeches, accompanied by the distribution of his own pamphlets, on the hollow Earth, and in 1906 William Reed’s book The Phantom of the Poles argued that Symmes’ Holes were so large as to make the poles nonexistent. In 1913 Marshall B. Gardner’s Journey to the Earth’s Interior suggested that the holes were only 1,000 feet (305m) wide, but he added that a sun, 600 miles (960km) in diameter, existed within Earth to provide heat and light to hollow-Earth inhabitants. By this time several works of fiction had also promoted the idea of a hollow Earth, most significantly Jules Verne’s Journey to the Center of the Earth (1864), Edgar Allan Poe’s The Narrative of Gordon Pym of Nantucket (1838), and H.G. Wells’s The Time Machine (1895).

Seekers of the Realm

During the early 1900s, however, interest in the possibility of a hollow Earth declined, until Palmer revived it with his magazine stories. As a result of Palmer’s publications, several people during the 1950s and 1960s claimed to have seen the hollow-Earth realm for themselves and wrote popular books about their experiences. One such person was Walter Seigmeister, whose 1964 book, The Hollow Earth, published under the pseudonym Raymond Bernard, suggested that pole explorer Admiral Richard E. Byrd had actually gone inside the hollow Earth. In 1965 Seigmeister went searching for a rumored hollow-Earth hole in South America but fell ill and died in the jungles there. Seigmeister’s level of passion about the subject is rare today, however: Most people believe geologists’ assertions that Earth’s core is not hollow but instead is filled with molten lava and gases.