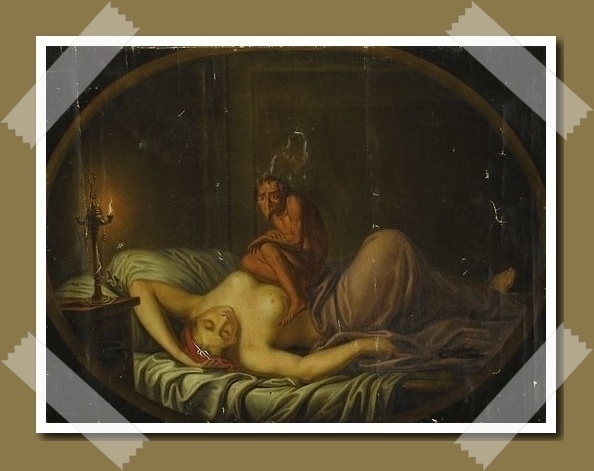 An Incubus is alewd male Demon who pursues women for sex. In Hebrew mythology, the Incubus and his female counterpart, the Succubus, visit women and men in their sleep, lie and press heavily upon them, and seduce them. They can be conjured by witches, sorcerers, and shamans. During the witch hysteria in Europe, incubi were believed to instruments of the Devil, tormenting people for the sole purpose of degrading their souls and perverting them to more vices. Incubus attacks are reported in modern Possession cases.

Incubus is from the Latin word incubare, which means “to lie upon.” Victims usually feel a heavy weight on top of them that paralyzes them. Sometimes there is a sense of choking or suffocation. The Greeks referred to the phenomenon as ephialtes, or “the pouncer.” Another Greek term is pnigalion, or “suffocation.” Pliny called it “suppressions” or “nocturnal illusions.”

The Incubus in Jewish Demonology

The existence and activities of incubi are acknowledged in Jewish Demonology in relation to a Midrashic legend of Adam’s siring Demonic offspring. According to the kabbalistic text the Zohar, these unions are continued by men who unknowingly cohabit with spirits in their sleep. The hybrid human-Demonic children have a Demonic nature and rank high in the echelons of Demons, occupying positions of authority and rulership. Thus, Demons value intercourse with humans.

The Incubus in the Early Christian Church

According to some of the fathers of the church, among them St. Justin Martyr, Clement of Alexandria, and Tertullian, as well as the Jewish historian Josephus and some Platonist philosophers, the incubi were the SONS OF GOD, angels who fell from heaven because they copulated with women. Their offspring were giants, the Nephilim, who could not have been the progeny of human men and women. St. Augustine included among incubi the pagan demigods sylvans and fauns, who were exceptionally lascivious and often injured women in their lust, he said. The Incubus during the European Inquisition During the witch hunts, Demonologists wrote handbooks on witches, the Devil, and Demons. They described the appearances, behavior, and characteristics of incubi and remedies against them.

Incubi are especially attracted to women with beautiful hair, young virgins, chaste widows, and all “devout” females. Nuns are among the most vulnerable and could be molested in the confessional as well as in bed. While the majority of women are forced into sex by the incubi, some of them submit willingly and even enjoy the act. It once was a common belief that women were more likely than men to be the sexual victims of Demons, because women were inferior to men and less able to resist temptation. Incubi have enormous phalluses that are so stiff they cause women great pain. According to the French Demonologist Nicholas Remy, a woman accused as a witch in Haraucourt in 1586 described her Demon’s penis as as long as a kitchen tool and without testicles or scrotum. Another accused witch, a woman named Didatia of Miremont, said at her trial in 1588 that she was “always so stretched by the huge, swollen member of her Demon that the sheets were drenched with blood.” Some Incubus penises were described as scaly, like the skin of a reptile. Incubi are not interested in procreation, only in degrading sex. However, they have the ability to impregnate women. They do not possess their own semen; they collect it from men in nocturnal emissions, masturbation, or coitus while the Demons are masquerading as succubi. The incubi have the power to preserve semen and use it later on one of their victims. Demonic semen is described as frigid and icy cold.

The children that result may be considered the children of the man who unwittingly provided the semen. Some old horror stories held that the children were half-human and half-beast. Remy described monstrous half-Demon children with two mouths, two heads, six fingers, two sets of teeth, beards, four eyes, three hands, and three feet. Others were missing limbs or had one eye in the middle of their forehead or in their knee. Some had no human form but were shapeless masses like sponges. Remy recounted an eyewitness description of an Incubus child: It had a hooked beak, a long smooth neck, quivering eyes, a pointed tail, a strident voice, and very swift feet upon which it ran rapidly to and fro as if seeking for some hiding-place in its stable.

Some of the offspring once were called Adamitici, as though they were descended in an unbroken line from Adam. Because of the defective semen, these infants cried or hissed continually, were emaciated but heavy, and sucked all their nurses dry. They also were attributed the superpowers of pagan demigods and heroes. Remy said monstrous births were due to the “lustful imagination of a prurient woman” and not to Demon semen. He cited Empedocles, who said that the likeness of a child is caused by impressions the mother experienced at the time of conception. If a woman had frequent intercourse with an Incubus, it affected her imagination, which in turn gave the child a savage appearance. In a small number of witchcraft cases, claims of molestation by incubi were dismissed as the products of female melancholia or vivid imagination. False pregnancies that arose from this state were chalked up to flatulence. Witches were said to copulate willingly with incubi, especially at a Sabbat. The inquisitors’ handbook the Malleus Maleficarum (1487), stated that “in times long past the Incubus devils used to infest women against their wills,” but “modern witches . . . willingly embrace this most foul and miserable servitude.” Some incubi served as Familiars to witches, who sent them to torment specific individuals.

Since sex with incubi was expected of witches, many accused witches were tortured until they confessed this crime. In 1485, the inquisitor of Como sent 41 women to their deaths at the stake. Their “confessions” of sex with incubi, among other witchcraft crimes, were corroborated by eyewitness accounts, as well as by hearsay evidence “and the testimony of credible witnesses.” Incubi were believed to be always visible to witches but only occasionally visible to others, even the victims. There were reports of people observed in the throes of passion with no one but themselves visible. Husbands saw incubi as they copulated with their wives but thought they were other men.
Incubi preyed on ordinary people as well as witches.

FRANCSCO-MARIA GUAZZO related a story in Compendium Maleficarum (1608) about a beautiful noble girl who refused to marry men of her station but instead fell into an affair with an Incubus. She freely told her parents of the marvelous sex they had at night and sometimes during the day. One night, the parents, a priest, and others bolted the house doors and went into their daughter’s bedroom with lit torches. There they found her in the embrace of a hideous Demon, “a horrible monster whose appearance was terrible beyond human imagination.” The priest immediately began reciting the GOSPEL OF JOHN. When he said, “The Word was made flesh,” the Demon shrieked, set fire to all the furniture, and left, carrying with him the roof of the bedroom. The girl immediately gave birth to a “loathsome monster.” The midwives built a large fire and burned it.

The church prescribed five ways to get rid of incubi:
• by sacramental confession
• by making the sign of the cross
• by reciting the Ave Maria
• by moving to another house or town
• by excommunication of the Demon by holy men

Other remedies included a recitation of the Lord’s Prayer and the sprinkling of holy water.

Not all theologians and Demonologists agreed that sex with Demons was possible. St. Thomas Aquinas said that sex with a Demon exceeds their natural powers but is in keeping with their malice and therefore might be permitted by God in accordance with the sins of a person. Johann Weyer dismissed incubi and succubi as “purely imaginary, the result of an impaired mind.” He also dismissed as “bizarre fiction” the idea that incubi could impregnate a woman by borrowing a man’s semen in the guise of succubi. Such stories of Demonic seduction were the products of “gullible historians,” he said. Montague Summers compiled quotations from earlier writings and countered in The History of Witchcraft and Demonology (1926) that “great Saints and scholars and all moral theologians of importance affirm the possibility of commerce with incarnate evil intelligences.”

Demons of Magick : Three Practical Rituals For Working With The 72 Demons – Gordon Winterfield

The Curse of Canaan: A Demonology of History – Eustace Mullins

Azazel: Steal Fire from the Gods

The book of the Sacred Magic of Abramelin the Mage – S. L. MacGregor Mathers

A Succubus is a Demon who takes the form of a beautiful woman in order to seduce men. The succubus, along with its male counterpart,…

Nantes Incubus (12th century) Demon who had sex with a woman for at least six years, before being exorcized by St. Bernard. When St. Bernard…

Sinistrari, Lodovico Maria (1622–1701) Franciscan theologian whose contribution to Demonology is his work Demoniality, in which he examines sexual acts with Demons. Lodovico Sinistrari likened…

A Demon is a lesser spirit that intervenes in the physical world. Demons usually are associated with evil, but in pre-Christian and non-Christian cultures, Demons…

Harlequin In European folklore, a GOBLIN figure whose name is sometimes synonymous with Satan or the Devil. The origin of the name Harlequin is uncertain,…