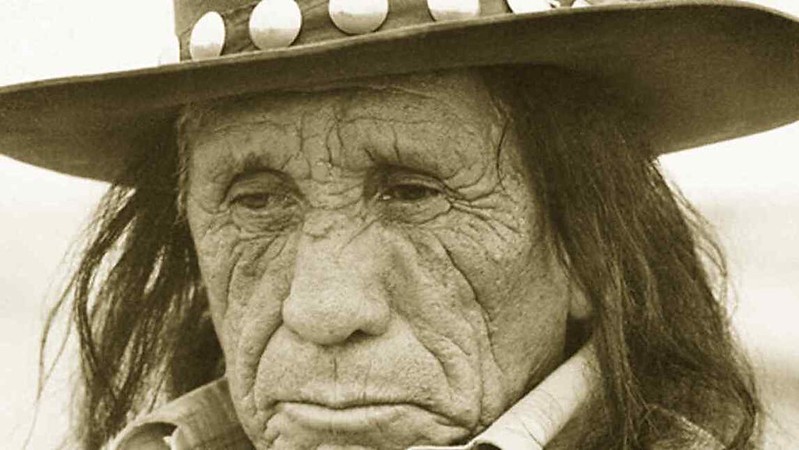 John Lame Deer, (Fire) (1900 or 1903–1976) – Oglala Lakota wichasha wakan, holy man or medicine man, who also earned a living as, among other things, a rancher, rodeo rider, and reservation police officer. Lame Deer initiated the collaboration with Richard Erdoes that resulted in their coauthoring of Lame Deer, Seeker of Visions (1972). For Erdoes, the project was evidently initiatory as he went on to coauthor a number of significant biographies and other works with Native American authors in a similar conversational style. In the book, Lame Deer describes his life and that of his people and explains Lakota ceremonies and practices—not only “traditional” ones such as vision quests, the sun dance, and healing rituals but also recent indigenous developments such as the Native American Church rooted in ritual ingestion of peyote. He says of the wichasha waken that “such a one can cure, prophesy, talk to the herbs, command the stones, conduct the sun dance or even change the weather, but all this is of no great importance to him. These are merely stages he has passed through. . . . He has the wakanya wowanyanke—the great vision.” Going on to talk about the importance of listening rather than preaching, Lame Deer stresses the vital importance of following one’s (initiatory) vision that establishes one’s particular way of relating to the powerful other-than-human persons of the world. He also talks about the vital importance of places, especially the Black Hills, and how their sacrality continues to lead to various forms of protest about dominant American abuse of the land, its waters, minerals, and life. This should not be mistaken for an environmentalist message, however, because it is about the place of humanity in the community of life.

Lame Deer’s shamanism is an aspect of a broader animism. His motivations for recording his life story and knowledge are both to guarantee the continuity among his people and other Native nations of the practices he discusses and to “save the white man from himself” by pointing out the folly of an obsession with gold or money. This book and websites about Lame Deer regularly refer to the humor with which he presented himself and his interests, and even desperately serious concerns. Lame Deer’s son, Archie Fire Lame Deer, followed his father as a respected holy man and passed the tradition on through his family.