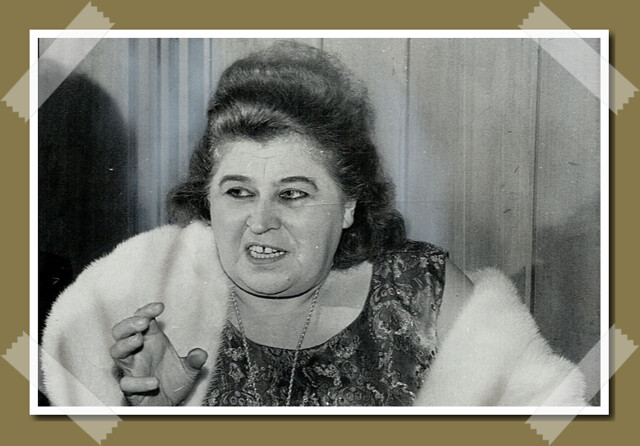 Sybil Leek (1923–1983) was an English witch and astrologer who moved to America in the 1960s and gained fame by publicizing the renaissance of witchcraft in the Western world. Her trademarks were a cape, loose gowns and a jackdaw named mr. Hotfoot Jackson who perched on her shoulder. She always wore a crystal necklace, passed on to her, she said, by her psychic russian grandmother.

Leek claimed to be a hereditary witch and also to have been trained by Aleister Crowley. Probably much of her witch biogaphy was embellished, intended to create publicity. Leek was born in the midlands in England. Her family, she said, came from a long line of hereditary witches that could trace its roots in the Old religion to 1134 in southern Ireland on her mother’s side and to occultists close to the royalty of czarist russia on her father’s side. Leek’s mother sported red-gold hair, a color said to be common among witches.

Psychic ability ran in all members of her family. Her most famous ancestor, she said, was an English witch named molly Leigh, who died in 1663. According to Leek, Leigh was buried at the very edge of the local church graveyard. Some time afterward, the vicar and others went to open Leigh’s cottage and were shocked to see Leigh, or her apparition, sitting in a chair with her jackdaw perched on her shoulder.

The vicar and his company allegedly reopened her grave, drove a stake through her heart, threw the living jackdaw into the coffin and reburied it. Leek, who claimed an IQ of 164, said she was taught at home by her grandmother until local officials required her to be enrolled in school at age 12.

She stayed four years and left at 16. Leek was nine years old when she met Crowley, supposedly a frequent visitor to the household. She said Crowley would take her out climbing in the rocks and recited his poetry, which encouraged her to write her own poetry.

He also gave Leek instruction in the importance of words of power and the power of sound. According to Leek, Crowley announced to her grandmother that little Leek would someday pick up where Crowley would leave off in occultism. The last time she saw him was in 1947, shortly before his death.

However, Crowley left no records indicating that he was acquainted with Leek or her family. When Leek was 15, she met a well-known pianist-conductor who was 24 years her senior and fell in love. They were married shortly after her 16th birthday and traveled about England and Europe. He died when she was 18. Leek returned home.

Leek said she was initiated into the Craft in southern France, in George du Loup in the hills above Nice, an area that was populated by Cathars in the middle Ages. According to Leek, her initiation was to replace an elderly russian aunt, who had been high priestess of a Covenand had died. returning again to England, Leek went to live in Burley, a village in the heart of the New Forest.

She lived among Gypsies and joined the Horsa coven which claimed to have existed for 700 years. She eventually became its high priestess. She successfully ran three antique shops. At some point, she married a man named Brian and had two sons, Stephen and Julian, who inherited the family’s psychic gifts.

In the 1950s, she experienced a mystical vision one spring day while walking alone in the New Forest. She became enveloped in a bright blue light that instilled in her a great sense of peace and the realization that her purpose in life was as an evangelist for the Old religion. It was not until 1962 that she began to promote herself as a hereditary witch and coven leader, and by 1963 the press was giving her attention.

The death of GeraldB. Gardnerin February 1964 created a vacuum for witch personalities—Gardner was a lover of the media limelight—and Leek stepped in. She announced the founding of the Witchcraft Research Association(WRA) with herself as president.

She also received a lot of media attention in 1964, when she challenged the academic Rossell Hope Robbins, who had written an encyclopedia on witchcraft and was lecturing against Margaret Murrayand her assertions that witchcraft was an ancient religion passed down through generations. Leek attended at least one lecture by Robbins and verbally sparred with him, with her jackdaw giving hoots as well.

The media lapped it up and dubbed Leek “Britain’s Number One Witch.” The publicity brought tourists and more media to her village. Business at her antique shop declined in the wake of autograph seekers, and her landlord refused to renew her lease unless she publicly denounced witchcraft. She refused, closed up the shop and left the New Forest. Leek’s career as a witch in Britain came to an end in 1964.

In 1963–64, churches in Britain were victims of ritualized vandalism, including a Sussex church not far from Leek’s home. She claimed that the symbols that defaced the church were directed at her and that the attack had been led by a black magician whom she had healed of illness. Despite her condemnation of the vandalism, the link she made between herself as a witch and black magic cost her supporters.

In July 1964 she was forced to resign from the WRA. She moved to the United States. Leek lived first in New York, but found it a depressing city, and particularly gloomy during the winter. She moved to Los Angeles, where she became acquainted with Crowley’s onetime secretary Israel Regardie. In her later years, she divided her time between Houston and Florida. She worked as an astrologer, becoming editor and publisher of her own astrological journal.

In 1968, her first book, Diary of a Witch, was published. The book described what it was like to be a “modern woman” practicing witchcraft, and it unleashed an enormous public response. Leek made frequent appearances on the media circuit. She met with mixed success, as some of her interviewers expected her to reinforce the stereotypes of witches as evil hags.

One of her greatest trials, she said, was learning patience and tolerance in dealing with such situations.

In all, Leek wrote more than 60 books, plus an internationally syndicated column. She liked to say that she never “preached” witchcraft, but sought only to explain the holistic philosophy of the religion and how it differed from satanism. She did not approve of nudity in rituals(see Skyclad) or of drugs. She believed in cursing, which set her apart from many witches. (See Curse.)

Leek wrote and spoke a great deal about Reincarnation, guided, she said, by the spirit of madame Helena P. Blavatsky, cofounder of the Theosophical Society. One night as she stood at a lectern to give a talk on psychic phenomena to an audience of the Theosophical Society in St. Louis, Leek was overcome with a shining light, in which she could see the face of an elderly woman. The light seemed to penetrate into Leek. She began her talk, but it was not her original speech, but on Reincarnation. She said later she had no awareness of what she was saying.

Afterward, Leek saw a photograph of Blavatsky and recognized her as the woman in her vision. For the rest of her life, Leek said, she felt that Blavatsky had become part of her, using her as an instrument to finish her own work and educate others on Reincarnation.

Leek had a particular fondness for snakes and birds. The jackdaw (a relative of the raven) accompanied her to all coven meetings until his death in 1969. Leek had a pet boa constrictor named miss Sashima. Leek suffered from illness in her last years and died in Melbourne, Florida, in 1983.

Folk Witchcraft : A Guide to Lore, Land, and the Familiar Spirit for the Solitary Practitioner – Roger Horne