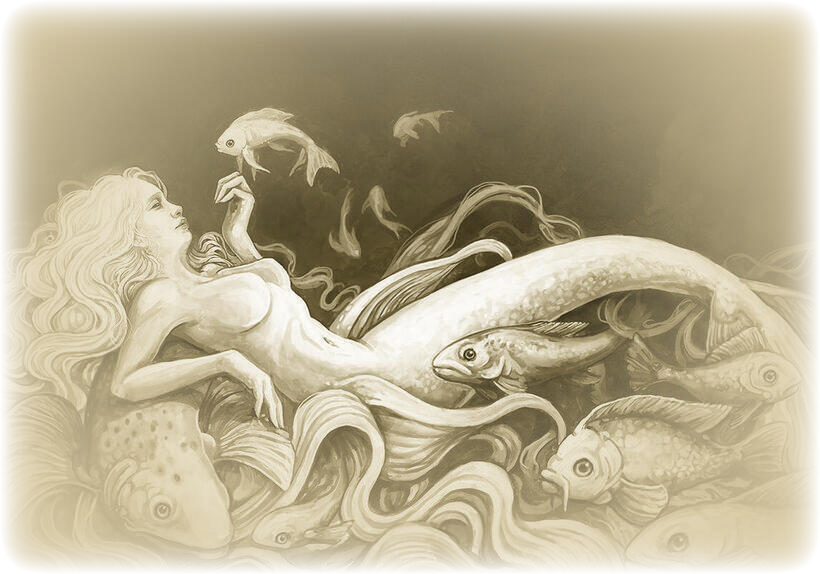 Lorelei is the name of a spirit and the big rock in the Rhine River on which she sits. Lorelei, the most famous of the Rhine Maidens, is a Sirenlike mermaid who sits on her rock in the Rhine, combing her long hair and singing. The Lorelei rock is located in a particularly hazardous juncture of the Rhine, characterized by swift, treacherous currents. Lorelei’s voice distracts fishermen and boaters from the dangers and they crash, many drowning.

• She was a girl who, betrayed by a faithless lover, threw herself into the Rhine and was transformed into this alluring but deadly mermaid

• She was a local woman whose true love, a sailor, drowned and so she threw herself into the river to join him

The name Lorelei derives from two old Rhine dialect words: lureln (murmuring) and ley (rock). An alternative interpretation defines Lorelei as lurking rock. The reason Lorelei is more famous than the other Rhine Maidens is because of the success of Heinrich Heine’s 1827 poem of the same name, which eventually became a well-loved song. Sylvia Plath’s 1956 poem also titled Lorelei may pay tribute to the Rhine Maidens in general.

The Rhine Maidens are the mermaids of the Rhine River. They are among the stars of Richard Wagner’s operatic Ring Cycle.

The Lorelei rock is on the Rhine’s eastern bank near Sankt Goarshausen, Germany.

Lorlei (Loreley, Lurlei, Lorelei) In German literary folklore and in local legend, an enchantress with long blond hair who sits on a cliff 133 meters…

Al Naddaha- The Caller Al Naddaha literally means “the caller,” but the word is also translated as “Siren,” meaning a deadly mermaid. Al Naddaha, a…

Vampire Mermaids Many mermaids have associations with death. Some are psychopomps providing responsible escort service to the realms of death, especially for those who die…