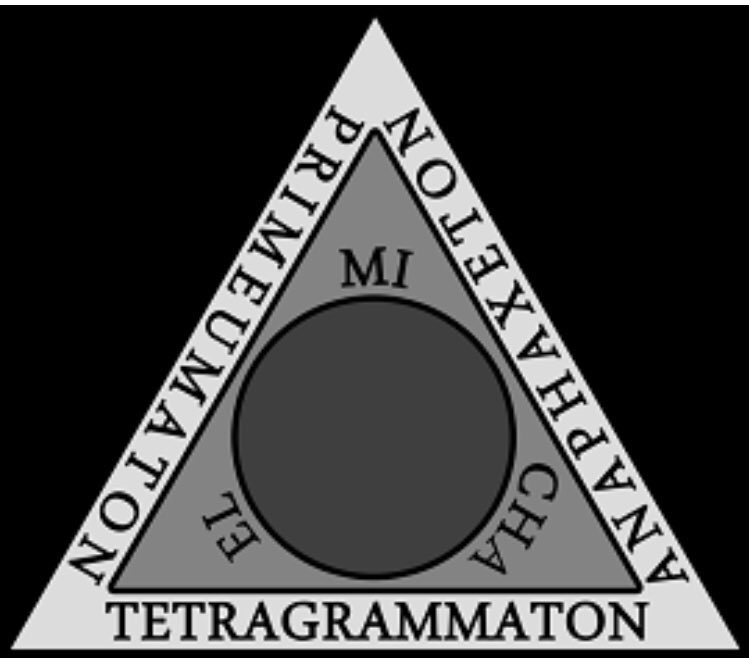 A magic triangle is in ceremonial magic, an inscribed triangle into which a spirit or Demon is evoked into physical appearance and is contained. The magic triangle, also called the Triangle of Art, is a symbol of manifestation of the invisible into the visible, or the powers of darkness and night into daylight. The points of the magic triangle are bounded by three great names of God.

As long as a spirit is inside a magical triangle, it is subject to the commands of the magician, who remains protected inside a Magic Circle. The spirit must be discharged or dismissed from within the triangle. It is considered dangerous to allow a spirit to escape the triangle.

Aleister Crowley and his assistant and lover, poet Victor Neuberg, performed a Ritual in 1909 in the desert south of Algiers, in which the demon Choronzon escaped from the magic triangle and attacked Neuberg. Neuberg managed to magically quell the demon.

Choronzon is a Demon of Dispersions and of the Abyss, summoned in an Evocation by Aleister Crowley and VICTOR NEUBERG. The account of the evocation…

Choronzon by Sol Devia Choronzon (Coronzon) is a Demon or spirit identified in the 16th century by John Dee and Edward Kelly, summoned in a…

Located off the southeastern coast of Japan, the devil’s sea is an area where ships and planes have been reported to vanish mysteriously. In this…