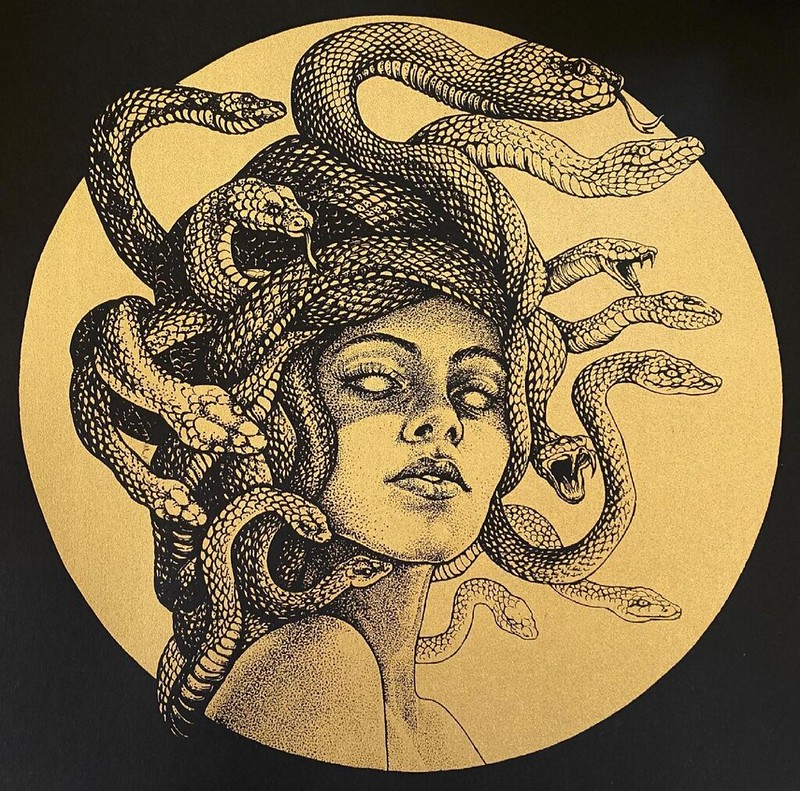 Medusa, the most beautiful and only mortal Gorgon sister, is a sea spirit. Poseidon courted her. She may have had consensual or even sacred sex with him in Athena’s temple, or she may have fled to the temple to get away from him. Pursuing her, he raped her there. Either way, Athena was furious. She transformed Medusa into a terrifying creature with snakes for hair and a face that literally turned those who gazed at her to stone.

When Perseus was sent to kill Medusa, a hopeless task he was not expected to survive, Athena orchestrated the assassination. Perseus beheaded Medusa while she slept, but her severed head retained its power to paralyze and turn viewers to stone. Perseus used it as a weapon before surrendering it to Athena. Pegasus, the winged horse, emerged from Medusa’s severed head, apparently conceived during her tryst with Poseidon, who often manifests as a stallion.

That’s the Greek myth. Other legends suggest that Medusa is a Libyan snake goddess. She may be Athena’s mother, a closely related spirit, or possibly even the identity Athena left behind when she moved from North Africa to Greece. Athena’s participation in the destruction of Medusa may be interpreted as the goddess destroying her own past. Alternatively she desired Medusa’s power. Athena wore Medusa’s head on her aegis and shield. Another myth suggests that Athena possessed more than Medusa’s head: she flayed Medusa and wore her skin.

Medusa is not just a minor sea spirit. She is a goddess of menstrual power and hence female power. There is an ancient metaphysical belief that menstrual blood is the single most spiritually and magically powerful substance on Earth. It can be used to destroy or overwhelm any other power.

Snakes are traditionally associated with menstruation. Modern euphemisms for menstruation including calling it a woman’s friend or the curse, but an evocative, old-fashioned one describes a menstruating woman as “bitten by the snake”. A German folk belief, documented as late as the eighteenth century, suggests that if a menstruating woman’s hair is buried in Earth, it will become a snake. In southern Asia, there’s an ancient belief that menstruation indicates possession by snake spirits.

Coral is allegedly Medusa’s blood, which spilled into the sea and was petrified. Medusa heads were traditionally carved as coral cameos for an extremely powerful protective amulet.

Medusa embodies menstruation’s protective powers. Statues of Medusa were used to guard Pagan Greek temples. Her image was used in Byzantine Greece to protect pregnant women and newborns. The image of her severed head remains a powerful protective amulet. She may also be accessed as a living goddess by those seeking menstrual, serpentine mysteries.

The technical term for the image of Medusa’s severed head is gorgoneion.

Medusa may manifest as the beautiful goddess she was prior to her transformation or in her classic monster form with contorted face and snake locks. She may also manifest as a mermaid.

Medusa is usually portrayed as the monster she became after her transformation by Athena. Most frequently, only her severed head is depicted. Sometimes, however, she is portrayed as a living woman. Her face is a Gorgon’s mask, but her body is that of a woman dressed and girded for battle. Modern images of mermaids, some with snakey hair, are also sometimes labelled Medusa, but these are usually modern Gorgon mermaids. In 2008, the Mattel company produced the “Barbie Doll as Medusa”, a collector’s doll that portrays a beautiful, sexy pre-transformation Medusa. She wears snake jewellery and a chiffon fishtail skirt. Her hair forms long curls that, according to Mattel, foretell the serpents that will become her hair.

Moon (many, including Orpheus’ disciples, have seen Medusa’s face in the moon)

Algol, usually considered a star of ill-fortune, is traditionally perceived as representing Medusa’s eye. Some modern astrologers suggest that this star is associated with female power and the reemergence of the feminine divine. In addition, the Medusa Nebula within the constellation of Gemini features snakelike filaments of glowing gas.

Perseus (destroyer) In Greek mythology, hero, son of Zeus and Danaë. When Perseus was a baby, his grandfather Acrisius was warned by an oracle that…

Pallas Pallas is often used as just another name for Athena, who is also frequently called Pallas-Athena. Pallas was, however, originally a distinct deity, the…

AEGIS (Goat Skin) In Greek mythology, the shield of ZEUS made by the smith-god HEPHAESTUS and covered with the skin of the goat-nymph AMALTHEA. The…

Three Gorgon sisters, daughters of sea spirits Keto and Phorkys, lived on an island in the Western Ocean, in the direction of Night, past their…