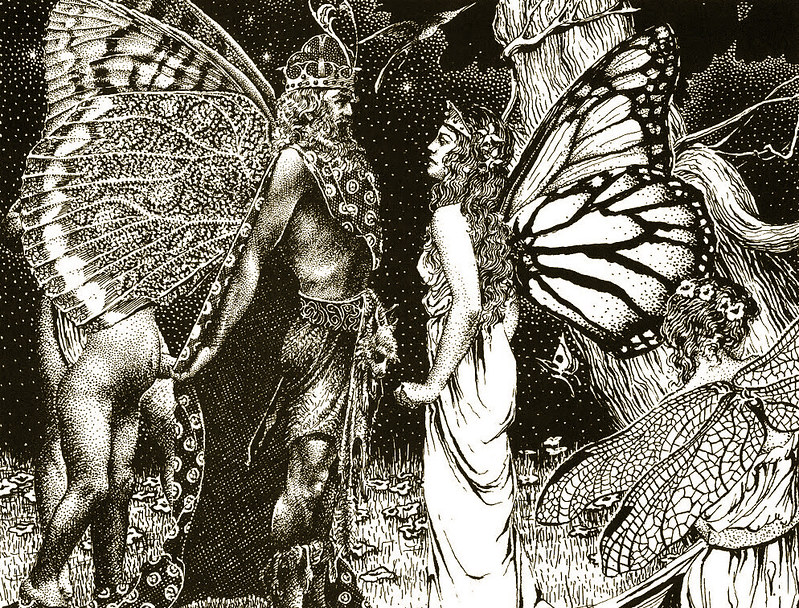 According to William Shakespeare, Oberon is King of the Fairies. Oberon and his consort Titania star in Shakespeare’s romantic comedy A Midsummer Night’s Dream. Oberon’s origins are mysterious. There’s debate as to how much is literary invention and how much is based on ancient folklore.

• Oberon may derive from Alberich.

• He may be the son of Morgan le Fay.

• He may derive from now-forgotten English folk traditions that were known in Shakespeare’s time.

Regardless of origin, Oberon is now an important spirit, beloved by many, especially because it’s rare to find a named male Fairy. He is a trickster and so is a little feared, too: no one really wants to be on the receiving end of practical jokes. Oberon guides those who have a vision and a mission. He is the patron of knights and paladins. A Midsummer Night’s Dream concludes with Oberon and Titania offering blessings of true love, fidelity, happiness, fertility, and protection.

Oberon is portrayed as a human-size Fairy or a tiny flower Fairy. Artists who have created his portrait include William Blake, Richard Dadd, Henry Fuseli, and Sir Joseph Noel Paton.

Oberon would presumably be pleased to receive Bell’s Oberon wheat ale; alternatively give him flowers, candles, and other potable spirits.

A fascinating addition to the magical literature of the Elizabethan era, this lavishly illustrated grimoire is a must-have for magic practitioners, collectors, and historians. The…

Alberich ORIGIN: Frankish Alberich’s history and identity are mysterious as befitting someone with his possible family connections. His name means “Elf Ruler” or “Elf King,”…