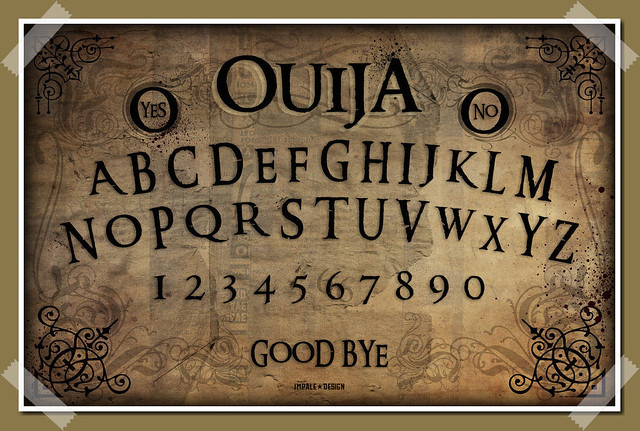 A patented game consisting of a board printed with letters and numbers, and the words yes, no, goodbye, over which players slide a three-legged triangular pointer, used by many people for divination and attempts to contact the dead and spirits. The users place fingertips on the pointer and ask questions, and the pointer spells out the answers. Ouija is a trademarked name owned by Parker Brothers. A generic term for devices similar to the Ouija is “talking board.”

As an interface between worlds, the Ouija is neutral, neither good nor evil. It is said to be dangerous by authorities in the Christian Church, who claim it provides a doorway for evil Demons to possess the users. Advocates of the Ouija say the device reveals the subconscious of the user or is an interface to genuine spirit communication.

Precursors to the Ouija date to Greece around 540 B.C.E. Pythagoras was said to have a divination tool that was a table that rolled on wheels. Pythagoras or a pupil placed his hands on the table, and it rolled toward signs and symbols. Ouija-like instruments were used through the Middle Ages. The forerunner of the modern Ouija was the planchette (French for little board), a triangular or heart-shaped pointer on three legs, which appeared in Europe in 1853. Its invention is usually attributed to a French spiritualist named M. Planchette. One leg was a pencil, which wrote out words and drew pictures. The planchette was popular with spiritualists and was used in Séances for automatic writing.

A type of talking board used by Native Americans was called a squdilatc.

The Ouija board itself has had a turbulent history. The origin of the board is murky: No one knows exactly where the inspiration originated and even who was the first to produce it. The Ouija seems to blend the characteristics of the planchette, minus the pencil, and dial plates, which were circular boards with letters painted along the bottom rim. Two persons concentrated on a rocking T-bar that spelled out messages by pointing to letters. The Ouija may have been the idea of a coffin maker, E. C. Reiche, who lived in Maryland in the 19th century. According to lore, Reiche had an interest in table tilting, in which a group of people sit around a table with hands lightly touching its surface and ask questions of spirits. The answers are given in the manner in which the table moves, shakes, and rocks. Reiche desired to create a device for communicating with the dead, and he was impressed that heavy tables seemed to be easily manipulated by spirits. He teamed up with two friends, Elijah Bond and Charles Kennard. At some point, Reiche dropped out of the picture.

The Kennard Novelty Company began manufacturing the Ouija in 1890. It is not clear whether Kennard or Bond founded the company or if they worked together. But later, each claimed to have been the founder. The patent for the Ouija was registered in Bond’s name in 1891. Also unclear is the origin of the name Ouija. According to one story, Kennard was given the name by a spirit while he was using the board himself. The spirit claimed it meant “good luck” in ancient Egyptian. Another story says that Reiche thought of the name.

The Ouija was sold initially as a device for talking to spirits, which angered mediums, who feared they would lose business. The early success of the company was shortlived, however, for in 1892 it was lost in a hostile takeover by two of Kennard’s own financial supporters, the brothers Isaac and William Fuld. The patent for the Ouija was reregistered the same year in the name of William Fuld, and the company’s name was changed to the Ouija Novelty Company. William Fuld also reinvented some of the board’s history, claiming credit himself for its invention. He said the name Ouija really was from the French and German words for “yes,” oui and ja, respectively. The new company had a difficult time. Competitors jumped into the market. Isaac manipulated the financial books and was fired by William, who then changed the company name again, to the Baltimore Talking Board Company. Isaac set up a rival company called Oriole and began marketing a near-duplicate board. In 1910, William added a clear plastic window to his planchette. The brothers engaged in a legal battle for control of the patent; William won. “Ouija, the Mystifying Oracle” soared in popularity during and after World War I, as thousands of bereaved persons attempted to contact the spirits of soldiers killed in the war. Fuld publicly claimed not to use the board himself, but many people believed that he did.

The company ran into federal tax trouble. Fuld had tried to avoid paying taxes on the grounds that the Ouija was a scientific device for mediumship and therefore qualified for religious status tax exemption. The federal government considered it a “sporting game.” A federal court ruled in favour of the government. Fuld appealed to the U.S. Supreme Court, which in 1922 upheld the lower court ruling. The Ouija has been a game or toy ever since.
By the late 1920s, the Ouija fad was in decline. In 1927, Fuld, 54, was on the roof of his company when he fell three stories to his death. His company was taken over by his sons, William and Hubert. In 1966, Parker Brothers, of Salem, Massachusetts, the maker of Monopoly and other games, bought the company. Parker Brothers purchased the trademark and rights in 1966 and markets the Ouija as entertainment.

Pros and Cons of the Ouija

Until the 1960s, the Ouija was considered to be mostly benign in nature. People used it to try to contact the dead, for divination of the future and for entertainment, to obtain messages from spirits. Clergy have criticized and denounced it, as they might any popular device or method used by people for do-it-yourself spirit contact. There are two theories as to the sources of answers derived from a Ouija board. One school of thought holds that the subconscious prompts the hands to spell out the answers most desired. The second holds that real entities are contacted, many of which are negative, earthbound spirits who have not accepted their deaths and are bent on possessing living human beings. A person who uses a Ouija invites entities to communicate, providing an opening through which evil beings gain a foothold.

The Ouija is credited with helping users discover spiritual insights and self-truths and aiding in creativity. In 1913, Pearl Curran, a St. Louis homemaker, began receiving communications from “Patience Worth,” a 16thcentury English woman, via the Ouija. Worth, speaking in an old English dialect, dictated an astounding volume of poetry and novels. In 1919, Betty and Stewart Edward White were using a Ouija as a lark with friends, when suddenly Betty was instructed to “get a pencil” and take dictation. Thus began a long relationship with the “Invisibles,” who seemed to be higher entities, who dispensed metaphysical wisdom. Stewart compiled it into The Betty Book. In 1963, Jane Roberts was using the Ouija when she met Seth, who purported to be a highly developed entity, who dictated highly regarded books on metaphysics. The Pulitzer Prize–winning poet James Merrill composed his epic The Changing Light at Sandover from two decades of spirit communications via the Ouija. The New Age author Ruth Montgomery began her channeling with a Ouija then moved to automatic typing.

The Ouija has not been without problems, however. Throughout its history, people have claimed to be instructed to commit crimes—even murder—via the Ouija and have blamed cases of insanity on the board. However, it is possible that such unstable individuals were already so inclined and were not “forced” by “spirits” to do anything beyond their inclinations and control.

Sexual assaults, beatings, torment, Obsession, and Possession also have been blamed on spirit contacts initiated via Ouija boards. At first, users think they are talking with dead people they know or friendly spirits. After benign beginnings, the communications turn dark and threatening as malicious and evil Demons reveal their true selves. The Demons engage in vicious attacks such as physical injury, rape, nightmares, visions of monsters, poltergeistlike disturbances, and even Levitation of victims. Some victims must seek psychiatric help. Some psychiatrists and psychologists say the “possession” is not caused by entities but by material dredged up from the subconscious. The “evil spirit” may be only the prankster archetype. Since some people expect problems from Ouija use, it is difficult to ascertain how many problems are genuine versus self-fulfilled expectations. Some problems may arise from open-ended use without control or discernment: People ask for any spirit to manifest. The great English magician and occultist Aleister Crowley was critical of this approach and once stated, “When you use the Ouija board, you give permission for any unknown spirit to communicate with you. Would you open the front door to your house and let in anybody who felt like it? Of course not.”

Ed and Lorraine Warren, Demonologists, called the Ouija “a notorious passkey to terror, even when the intent of communication is decidedly positive in nature.” Of the thousands of Demonic and negative cases the Warrens claimed to have investigated in their careers, they said four of 10 involved problems resulting from the Ouija. Ed said that all doors to the supernatural—the Ouija, Séances, conjuring and candle rituals, and automatic writing devices—“ lead down a road of misfortune, terror, and ruin.” One of the Warrens’ most sensational cases involved a Ouija board. In March 1974, they were consulted by the Donovan family, whose daughter, Patty, had been using a Ouija board for months to talk to a spirit who said he had died as a teenager. Patty asked the spirit to manifest, and the Donovan household began experiencing unpleasant phenomena of destruction, rains of rocks, Levitation of objects, the manifestation of black forms, and noises. The Warrens investigated, and the case was turned over to Catholic clergy for exorcism. A successful rite was performed on May 2, 1974, during which a Demon manifested as a seven-foot-tall being with horns, cloven feet, and a tail, according to the Warrens.

Many paranormal investigators and occultists say they have no problem using the Ouija, and the key is responsible use. Any spirit interface device should not be used for entertainment or for open calls to the spirit world; nor should participants use alcohol or drugs prior to or during sessions. Boards should never be used to contact or conjure Demonic entities.