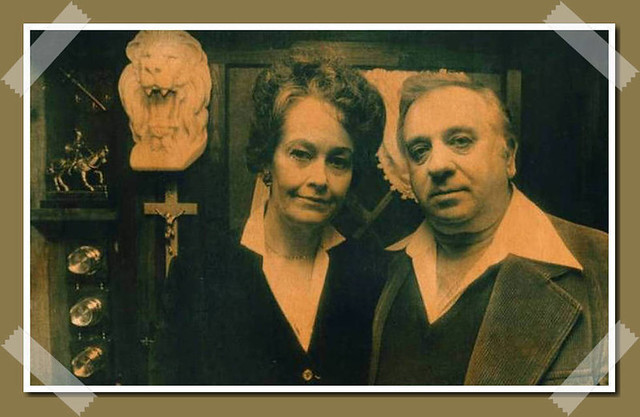 Ed Warren (1926–2006) and Lorraine (1927 – ) were American Demonologists and ghost investigators. Ed and Lorraine Warren, husband and wife, were involved in thousands of cases of spirit identification, hauntings, and Demonic Infestation, Oppression, and Possession of both people and property. They acted as consultants on some of America’s most famous paranormal cases, such as the Smurl Haunting in West Pittston, Pennsylvania, in the 1980s, and the Amityville Haunting of the Lutz family on Long Island, in the 1970s. During his lifetime, Ed Warren achieved the rare distinction of being a layperson recognized as a Demonologist by the Catholic Church.

Background
Both Ed and Lorraine were born in Bridgeport, Connecticut, but did not meet until they were teenagers. Ed was born on September 7, 1926; his father was a state trooper and a devout Catholic and enrolled Ed in parochial school. The Warren family lived in a big old house rented out by an unmarried landlady who did not approve of dogs or children, always throwing things at them in annoyance. Ed was five when the landlady passed away, and he saw his first apparition when she materialized in his bedroom closet a few days later, as sour as she had been in life.

His father always told Ed that there must be a logical explanation for the paranormal behaviour his son experienced, but the elder Warren never produced one. Young Ed would choose to stay outside in freezing or rainy weather rather than be in the house alone. One of Ed’s supernatural visitors was a nun, his father’s sister. Ed had expressed a desire to become a priest, but the nun told him that he would not; rather, he would consult priests and would do more work than 100 of them.

When Ed was 12, his family moved out of their haunted home. Although he had come to terms with the spirits there, his exposure to the paranormal just fueled his desire for more investigation and confrontation. Three blocks away, Lorraine Rita Moran was born on January 31, 1927, to a fairly affluent Irish family. She attended Laurelton Hall, a Catholic girls’ school in nearby Milford, and it was while at school that young Lorraine, age 12, discovered that her gift of clairvoyance was not shared by everyone.

On Arbor Day that year, the nuns had organized a tree planting, and as soon as the sapling was set in the ground, Lorraine began staring at the sky, seeing the tree in its full-grown splendor. Once she told a nun that her “lights,” or aura, were brighter than the lights around the mother superior. The nuns considered her psychic ability to be sinful and packed her off to a weekend retreat of prayer and silence.

At age 16, Ed met Lorraine while working as an usher at the Colonial Theater in Bridgeport, on June 23, 1943. She knew immediately that they would spend the rest of their lives together. He was the only boy she ever dated. On his 17th birthday on September 7, 1943, Ed enlisted in the U.S. Navy, and he served with the armed navy guard aboard a merchant marine vessel. He and Lorraine married on May 22, 1945, on survivors’ leave in Bridgeport. They were both 18. Their only child, Judy, was six months old before Ed left the navy. After the war, Ed attended the Perry Art School, affiliated with Yale University, but left to travel around New England painting landscapes and searching for haunted houses. His favourite pastime was to hear of a haunted house in a community, paint a portrait of the home, and give it to the house’s owners. He also earned income from his paintings.

But what Ed particularly liked was to be invited inside the haunted house by its owners and allowed to look around. Eventually, Ed’s experiences as a ghost hunter and the wealth of information he had collected led the Warrens away from itinerant art to the full-time pursuit of paranormal consultation. Frequently, they had been the only ones in whom the frightened owners of a haunted house had confided the strange occurrences happening there; more and more, the Warrens found themselves giving advice and consolation not only to the homeowners but to interested strangers. Finding that negative energy associated with teenagers and young adults attracted spirit activity, the Warrens began giving lectures at colleges in order to encourage their listeners to avoid unwittingly inviting trouble into their lives and family homes. In 1969, an exhibit of Ed’s artwork attracted the attention of the media and a literary agent, which significantly boosted their public profile.

Paranormal Investigations
The Warrens amassed a large archive of detailed interviews and reports from afflicted families and from other investigators; photographs; audio and video recordings of paranormal activity, including the voices of the spirits; a museum of spirit-infested clothing, dolls, and other objects; and myriad letters of gratitude from government officials, clergy, and ordinary people for the couple’s intervention in horrible, unbelievably evil situations. From their research, they identified different types of spirits requiring different remedies. They investigated abroad, as well as throughout America.

After an invitation to investigate a site, the Warrens arranged a visit as quickly as possible. Once at the site, they usually split up, with Ed conducting careful and thorough interviews of all persons involved, and Lorraine walking the house to see whether she could discern spirit activity through her psychic sense. Lorraine usually detected spirit presence almost immediately and knew also whether the spirits were earthbound human ghosts or apparitions or inhuman, Demonic influences.

Demonology Work
The Warrens stressed that God does not let evil visit humans, but that humans must in some way invite the malevolence into their lives: by toying with the supernatural (conjuring, Ouija™ boards, Séances, black Witchcraft, and satanic rituals); by sinking into negative, depressive states; or by becoming obsessed with a person or place. Ed referred to these “permissions” as the Law of Invitation and the Law of Attraction. Once allowed to enter, the Demonic takes control in three stages: infestation, oppression, and possession. In severe circumstances, the final outcome can be death.

The Warrens’ objective was to document and effect closure through the clergy. They helped identify the manifestations of Demonic infestation, oppression, and possession so that trained exorcists could work to rid the victim of evil influence. They helped the afflicted through support, blessing, and prayer. They did not perform exorcisms themselves but worked with exorcists and assisted them. Ed and Lorraine strongly warned against anyone’s trying to perform exorcisms independently.

The Warrens estimate that they investigated more than 8,000 cases in more than 50 years of work. Some of these investigations have been sensational, such as “Annabelle,” in which spirits infested a large Raggedy Ann doll claiming to be the ghost of a little girl; the Donovan case, which stemmed from a teenage daughter’s invitation for infestation through her Ouija™ board; the identification of a ghost at the United States Military Academy at West Point and Lorraine’s help to the spirit to pass on to the other side; and the study of cemeteries and how they are gathering points for spirits.

The most famous and controversial case the Warrens encountered was the possession of the Lutz home in Amityville, Long Island, New York. Ed and Lorraine were two of only nine individuals asked to be consultants on the legitimacy of Demonic activity in the house. They said that the possession of the Lutz home was authentic. Besides their Demonology rescue work, lectures, and guidance of supernatural tours, the Warrens cofounded the New England Society for Psychic Research, in the early 1950s.

They also wrote 10 books based on their experiences:
Deliver Us from Evil,
The Demonologist,
The Devil in Connecticut,
The Haunted (based on the Smurl case),
Werewolf,
Satan’s Harvest,
The Ghost Hunters,
In a Dark Place,
Graveyard
Ghost Tracks.

The Haunted was released as a film in 1991, and the made-for-television movie The Demon Murder Case (1983) was based on The Devil in Connecticut.

On March 26, 2001, Ed Warren collapsed as a result of heart problems after a trip to Japan to assist in Buddhist exorcism techniques. He was hospitalized for a year and was in a coma for several months. He spent the next four years under the home care of Lorraine, who was at his side when he passed away of natural causes on August 23, 2006. He was buried with full military honours. Lorraine continues their work, collaborating with her son-in-law, Tony Spera; conducting research and investigations; giving lectures; and participating in media projects.

Ed’s nephew, John Zaffis, of Stratford, Connecticut, who investigated cases with the Warrens, works independently as a paranormal researcher and investigator; he founded the Paranormal Research Society of New England in 1998.