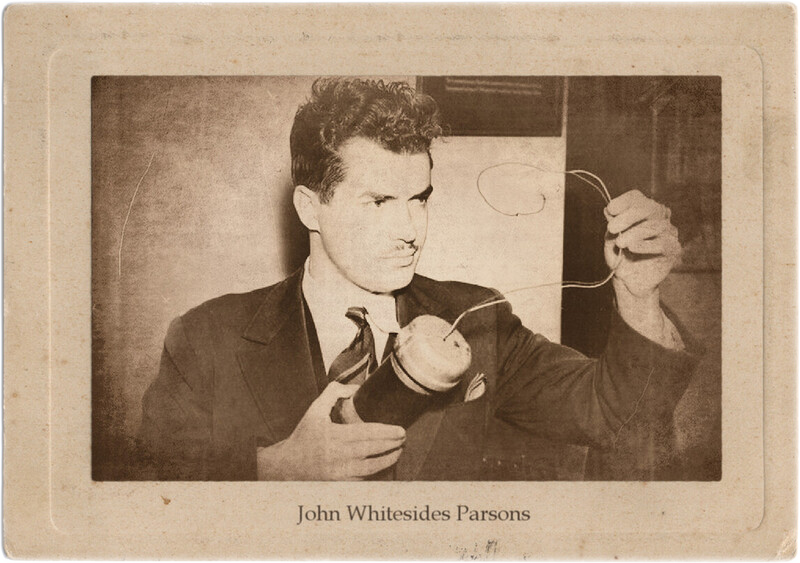 John Whitesides Parsons (1914–1952) was an American chemist and magician and a follower of ALEISTER CROWLEY. John (known as Jack) Parsons was regarded as a brilliant physical chemist. He participated in the founding of the California Institute of Technology, where he worked as an expert in rocket propulsion.

Parsons was born on October 2, 1914, in Los Angeles. He was named Marvel Whiteside Parsons after his father, Marvel H. Parsons, and his mother, whose maiden name was Ruth Virginia Whitesides. He was their second child; their first died in infancy. Soon after Parson’s birth, his mother left his father out of anger over an extramarital affair. It is uncertain whether they ever legally divorced. Ruth began calling her young son John but never legally changed his name. John favoured the nickname Jack as he grew older.

As a boy, Parsons was fascinated by science fiction and rockets, and he and his friend Edward S. Forman experimented with small rockets, using dangerous combinations of black powder fuel. The two formed a lifelong friendship and working relationship.

In 1932 Parsons went to work for the Hercules Powder Company in Pasadena, where he refined his expertise on powder explosives. In 1933 he graduated from the private University School in Los Angeles. He and Forman attended Pasadena Junior College and went on to the University of Southern California, from which neither of them graduated. In 1935 Parsons married Helen Northrup.

Parsons and Forman were hired by the Guggenheim Aereonautical Laboratory, which became the Jet Propulsion Laboratory in 1936. With Frank Malina, they played key roles in the development of the United States’s new rocketry program, as well as in jet projects for the U.S. Army Air Corps and the U.S. Navy.

In the late 1930s, Parsons discovered the works of Crowley and told friends that he was in correspondence with him. Parsons was strongly attracted to Crowley’s sex magic, and soon a colleague introduced him to Wilfred T. Smith, the leader of the Agape Lodge of the Ordo Templi Orientis, located in Los Angeles. Parsons and his wife began attending meetings and the lodge’s Gnostic Mass, Crowley’s version of the Catholic mass that Crowley said was corrupted. Crowley had made the Gnostic Mass one of the OTO’s central rites, and it was used to recruit new members. Parsons advanced in his occult knowledge and learned Astral Travel and other skills.

In 1940 Parsons met the actress Jane Wolfe, who had been initiated by Crowley at his Abbey of Thelema (Cefalu) in Italy. Wolfe considered Parsons to be “potentially bisexual” and the genuine successor to Crowley. Smith also saw great potential in Parsons, writing to Crowley that he was going to be valuable to the OTO. Jack and Helen officially joined the Agape Lodge on February 15, 1941. Parsons took the name Frater T.O.P.A.N., or Frater 210 for short; 210 was a number significant in Crowley’s magic, the precise meaning of which Crowley said was “too holy” to reveal. T.O.P.A.N. had a dual meaning of “To Pan” and also Parson’s MagicAL MOTTO, Thelemum Obtentum Procedero Amoris Nuptiae, or “The Obtainment of Thelema through the Nuptials of Love.” Helen became Soror Grimaud.

Thus Parsons entered into a double life. By day he was a brilliant and successful rocket scientist, earning large sums of money, regarded as well educated and cultured by his peers. By night he was an occultist and magician, participating in rites that his peers would have found shocking and bizarre. Parsons became dedicated to bringing Crowley’s New Aeon into manifestation. He was devoted to Smith. He and Helen turned their bedroom in their mansion into a temple and massed a library of occult works. Parsons rented out rooms in his mansion to occultists, offending the neighbors with frequent, loud parties involving strange Rituals. A thrill-seeker, Parsons engaged in increasingly dangerous occult rituals, which he acknowledged might have undesirable side effects such as the creation of permanent haunting phenomena. He liked to evoke ElementALS, some of which were lingering and troublesome in the bedroom temple. Banishing rituals were conducted frequently.

Rumors circulated that Parsons was leading a black magic cult. There were police investigations, but no action against Parsons was taken.

Parsons became one of Crowley’s main sources of funding in the United States and funneled large sums of money to him in England through Crowley’s named OTO Outer Head successor, Karl Germer. This arrangement lasted until Crowley’s death in 1947.

Germer despised Smith and succeeded in influencing Crowley to retire him from the Agape Lodge. Leadership was taken over by Parsons. Meanwhile, Helen had become Smith’s lover and bore him a son in 1943. Parsons divorced her the same year and entered into a relationship with her younger sister or half sister, Betty, whose real name was Sara. He told others that he had gotten rid of Helen by means of Witchcraft. Betty was 18 years old, 11 years younger than Parsons. He encouraged her to take other lovers, and he engaged in affairs himself. He began to use drugs frequently in his magical work.

In April 1945, Parsons met L. Ron Hubbard, who became the founder of Scientology. Hubbard liked Parsons and moved in with him and Betty. Hubbard and Betty began an affair. In a letter to Crowley, Parsons enthused about Hubbard, noting that he had no formal training in magic but possessed a keen natural ability for it.

Despite Parson’s sexual open-mindedness, he resented Hubbard’s affair with Betty, and he conducted a ritual to overcome his jealousy. He told Crowley that, though he bore Betty and Hubbard no ill will, he desired to have a female magical partner on his own terms. He resolved to summon magically an elemental in a female form who would serve as his ideal companion and partner. The ritual was supposed to be performed alone, but Parsons performed it in the presence of Hubbard, who acted as scribe.

As of January 15, the results were disappointing—only a violent wind storm. In February 1946, a woman artist from New York named Marjorie C. appeared, and Parsons recognized her as the result of his summoning. She was red-haired with green eyes. Parsons described her as “strong-minded and determined, with strong masculine characteristics and a fanatical independence.”

Parsons and Marjorie performed sex magic for several weeks to invoke Babalon. Parsons informed Crowley in cryptic terms of his progress and impending success. Crowley dismissed it as an ill-intentioned effort to create a moonchild, a magical child. In late February, Marjorie split from Parsons and returned to New York, where she discovered she was pregnant.

Parsons performed a ritual alone to invoke Babalon. He said the presence of Babalon commanded him to write. The result was the 77-verse Liber 49, which Parsons viewed as the fourth chapter to Crowley’s The Book of the Law. He also took it as further indication that he was to create a magical child into which Babalon would incarnate and fulfill Crowley’s prediction of the birth of one “mightier than all the kings on earth.” Only two chapters of Parsons’s original book survive.

In March 1946, Marjorie returned to Parsons and began living with him. They resumed sex magic, and Hubbard served as the scryer to convey messages from Babalon. The rituals went on for some time. Crowley reacted to this with concern, warning Parsons not to become too attached to Marjorie. He quoted Eliphas Levi, saying that “the love of the Magus for such things is insensate and may destroy him.” The same month, Parsons stepped down as head of the Agape Lodge and turned it over to Roy Leffingwell.

The Babalon Working failed; Marjorie did not have a magical child. But nine years later, she claimed to be Babalon herself and to have given birth on the Astral Plane to a magical child. While the Babalon Working was going on, Parsons, Betty, and Hubbard pooled money to purchase a yacht with the intention of reselling it for a profit; Parsons put up most of the funds. Betty and Hubbard deserted Parsons and left in the yacht. Parsons told Crowley he used magic to force them to return. Within the first few hours of their departure, Parsons said he performed a full EVOCATION to Bartzabel, the spirit of Mars, causing the yacht to be struck by a sudden squall. The severity of the storm ripped off the yacht’s sails and forced a return to port. Parsons seized the damaged boat but lost most of the money he had invested.

Parsons retreated from magic and focused instead on his rocketry career. He was targeted by the Federal Bureau of Investigation and in 1948 lost his security clearance. FBI documents describe Parson’s magical activities as a “mythic love cult,” but the agency maintained that the real reason for their investigation was his ties to known Communists. His clearance was restored a year later in March 1949. In January 1952 Parsons permanently lost his security clearance. Meanwhile, on the magical front, he decided to pursue contact with his Holy Guardian Angel. His efforts, he told Germer in a letter, produced “acute psychosis . . . manic hysteria and depressing melancholic stupor.”

With the loss of his security clearance, Parsons found part-time work for a powder company and did explosives consulting for films. On June 17, 1952, Parsons was working in his garage at home when two violent explosions ripped through it. Severely injured, he survived the explosions and was conscious when he was dragged out by neighbors. He died in a hospital about a half hour later, saying, “I wasn’t done.” Informed of her son’s death, Ruth was shattered. Within a few hours, she committed suicide by overdosing on sleeping pills.

The explosion was said to be an accident due to Parsons’s alleged mishandling of cordite and mercury fulminate, a sensitive detonator. But those familiar with his magical interests thought that the explosion resulted from his ongoing efforts to manifest Babalon.

This remarkable true story about the co-founder of Jet Propulsion Laboratory. By day, Parsons’ unorthodox genius created a solid rocket fuel that helped the Allies…

Ordo Templi Orientis (OTO) Quasi-Mason magical order founded in Germany in 1901 and focused on sex magic as the key to Hermetic and Masonic secrets.…

This village is the scene for a tale of ghost laying with an unusual twist to it, recorded in 1924 from informants whose memories it…

Roaring Bull of Bagbury In English folklore, a bogielike spirit, or even the Devil, in the form of a ghostly, frightening bull. As a mortal,…