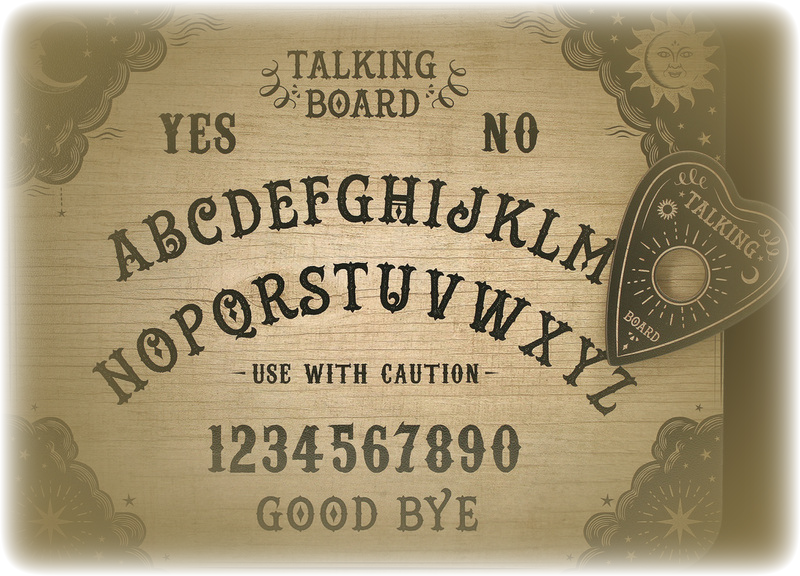 A talking board is a device for divining answers to questions and talking with spirits, often marketed as a game. Talking boards are similar to the Planchette. They feature letters of the alphabet and numerals zero through nine, and the words “yes” and “no.” The user asks a question, places fingertips on a pointer and then allows the pointer to spell out the answer.

Talking boards are controversial. Advocates feel the movements of the pointers are directed by discarnate beings and spirits of the dead. Skeptics say the user moves the platform subconsciously without realizing it.

The best-known talking board is the Ouija, an oracle game patented in 1892 by an American, William Fuld. The origin of the name is not known, but is popularly thought to be derived from the French and German words for “yes,” oui and ja respectively.

Shortly after its invention, the Ouija enjoyed great popularity due to the interest in Spiritualism and to the thousands of World War I bereaved who tried to find ways to communicate with their loved ones who had been killed in the war. Since then, its popularity often has coincided with peaks of interest in the occult. The Ouija is marketed as a game for entertainment purposes.

Critics contend that talking boards are inherently dangerous and that any beings who communicate through such a device are likely to be Demons who will attempt to possess the user. Fears about talking boards are in part the result of negative images popularized by films and horror novels, in which talking boards serve as a convenient plot device for Demonic activities. Most paranormal investigators do not recommend uses of talking boards because they often seem to connect users to low-level spirits.

However, many cases of talking board use in Automatic Writing and communication with spirits of the dead have been benign, even productive, in nature. The entity Seth, popularized by the writings of Jane Roberts in the 1960s and 1970s, initiated his communication with Roberts through a Ouija board. The communication then rapidly progressed to direct automatic writing with a pen and then into trance Mediumship in which Seth used Roberts’s vocal cords to speak.

The Ouija also served as the initial means of communication with spirits of the dead in 1913 for Pearl Curran (see Patience Worth), and in 1919 for Stewart Edward White and his wife, Betty. The Whites spent 17 years studying Betty’s mediumship with a group of discarnate beings who called themselves “the Invisibles.” After initial contact was made through the Ouija, Betty began using automatic writing and then trance mediumship, in which the spirits allegedly used her own vocal cords. The product of this mediumship is the now classic book The Betty Book (1937), in which the Invisibles talk about the importance of spiritual development among humanity.

A patented game consisting of a board printed with letters and numbers, and the words yes, no, goodbye, over which players slide a three-legged triangular…

From The Introduction: From time immemorial, people have been wanting to communicate with the great unknown. We all know instinctively that there is a reality…

Pearl Curran Patience Worth is a Famous automatism case involving a drop-in communication with a literary bent. Patience Worth, as the spirit identified herself, began…