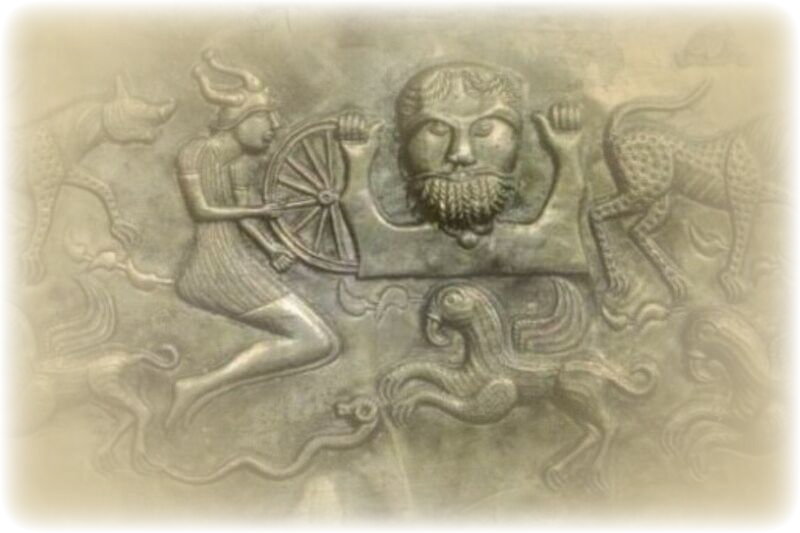 The Dagda : The Good God

Chief of the Tuatha Dé Danaan, oldest of the Celtic deities, Dagda literally means “the good god.” What is his real name? That information may be reserved for initiates or he may be so old, no one knows any longer. The Dagda is a spirit of magic and abundance. He is the tribal All-Father, deity of the Druids, Lord of Regeneration, provider of plenty, Captain of Abundance. He is the Lord of New Grange; his children, Brigid and Angus Mac Og, are among the most powerful and beloved Irish deities. He plays the role of ideal father for his devotees.

The Dagda’s barrow (sidhe) features an inexhaustible supply of drink, three trees that always bear fruit, and a pig that is always alive, even though it’s slaughtered and consumed daily. He may be the prototype of the Grail King. The Romans identified him with Hercules.

The Dagda is the master of paradox. Incredibly wise and powerful, he’s uncouth and bumbling, too. He’s an old, bald, fat, sloppy guy, but he’s a sex master, too, a fertility spirit renowned for virility and sexual prowess. The Dagda engages in the Great Rite with great goddesses like the Morrigan and Boann.

A big, bald, bumbler with a beer belly; the Dagda wears a rustic tunic that no longer fits him. It’s too short for him, barely covering his buttocks and periodically exposing them. Don’t be fooled by his appearance. The Dagda only plays the fool; he’s brilliant, wise, and powerful. Furthermore, although it’s his posterior that’s mockingly discussed in myth, at least in the surviving ones recorded by Christian priests, tunics don’t only ride up in the back. Presumably, the Dagda flashes his groin, too: he is a phallic deity, master of fertility and abundance.

• A ladle so big, two men can lie down in it

• An iron club, which kills with one end and resurrects with the other; so big and heavy, it takes eight strong men to lift it, though the Dagda has no trouble carrying it on his own

The Dagda, master harper, has a repertoire of three types of magical songs: those that make him invisible on the battlefield, and songs to seduce people into sex or foolish behaviour, against their better judgment.

On Samhain, the Dagda performs the Great Rite. On a day otherwise associated with death, the Dagda creates new life.