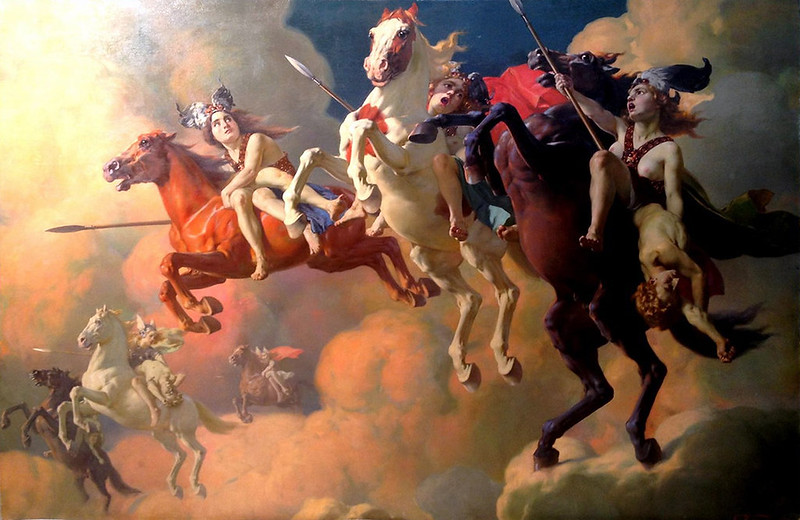 Valkyries, Goddesses of Life, Death, Battle, and Magic, serve as psychopomps, divine escorts guiding souls to the next realm. The original Valkyries were daughters of Odin and Herta, but their ranks swelled to also include deified priestesses of Odin. Their leader is Freya, operating under her nom de guerre, Valfreya. Individual Valkyries like Brunhilde, Hilda, and Sigrun achieved renown and are sometimes venerated independently. They are also venerated alongside Freya, Herta, and/or Odin.

The name Valkyrie may derive from Valr or “fallen in battle” and Kyria, “she who chooses.” They are not exclusively battlefield goddesses: they also serve as escorts for those dying elsewhere, but they are now most famous for their role on the fields of war. Valkyries travel to battlefields where they determine a battle’s course: who wins, who loses, who lives, and who dies. According to Norse cosmology, souls of half the dead warriors journey to Freya’s hall while the other half go to Valhalla, Odin’s hall. The Valkyries select the warriors going to Valhalla and serve as their escort.

The Norns are sometimes classified among the Valkyries: they may perform double duty. Like the Norns, the Valkyries are weaving goddesses, although their materials are unique:

• Arrows serve as shuttles for the Valkyries’ looms.

• Entrails form their warp; their weft is consistently crimson.

• The Valkyrie (Die Walküre) is the second of the cycle of four operas comprising Richard Wagner’s Ring of the Nibelungs and features the famous musical theme “The Ride of the Valkyries.” • Valkyrie, the Marvel Comics superheroine, is an incarnation of Brunhilde.

Valkyries are psychic, spiritual, and magical warriors as well as martial artists. They may be invoked to battle on your behalf in many contexts not only actual, literal war.

Horn (as for drinking)

The Valkyries are associated with the Aurora Borealis, the Northern Lights

The Viking Spirit: An Introduction to Norse Mythology and Religion

Tales of Norse Mythology (Myths of Norsement from the Eddas and the Sagas) – Helen A. Guerber

The Poetic Edda: Stories of the Norse Gods and Heroes – Crawford Jackson

Myth and Religion of the North: The Religion of Ancient Scandinavia – Edward Oswald Gabriel Turville-Petre