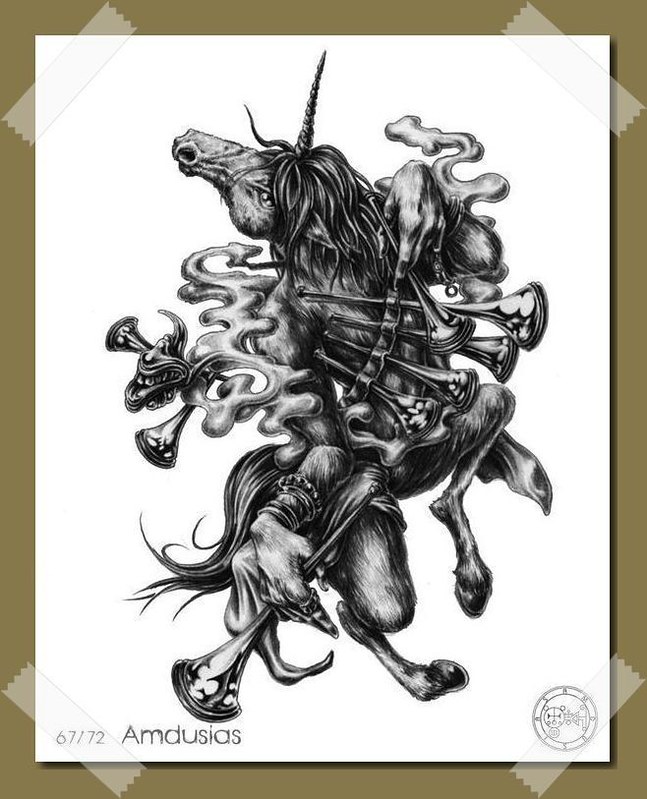 The Demon Amdusias is a fallen Angel and 67th of the 72 Spirits of Solomon. Amduscias is a great duke of Hell who rules over 29 Legions of Demons. He appears first as a unicorn.

He will take on human shape if commanded to do so, but this will cause musical instruments to be heard but not seen. Trees sway at the sound of his voice, and he gives people the power to make trees fall and also gives excellent Familiars.

Amdusias (also spelled Amduscias and Amdukias) is one of the Demons of hell described in the Goetia, one of the books of the manuscript grimoire known as the Lemegeton or Lesser Key of Solomon. He is mentioned by Johann Wier in his Pseudomonarchia daemonum , and by Reginald Scot in The Discoverie of Witchcraft

In Collin de Plancy's illustration, Amdusias is crowned to show that he is a duke of hell. He has been given a horse's head to go with his single horn, because unicorns are usually represented in the shape of a horse. Two trumpets lie on the ground, and a third trumpet is slung over his shoulders.

AMDUSIAS, or AMDUKIAS. – The Sixty-seventh Spirit is Amdusias, or Amdukias.
He is a Duke Great and Strong, appearing at first like a Unicorn, but at the request of the Exorcist he standeth before him in Human Shape, causing Trumpets, and all manner of Musical Instruments to be heard, but not soon or immediately. Also he can cause Trees to bend and incline according to the Exorcist’s Will. He giveth Excellent Familiars. He governeth 29 Legions of Spirits. And his Seal is this, etc.

Amduscias a great and a strong duke, he commeth foorth as an unicorne, when he standeth before his maister in humane shape, being commanded, he easilie bringeth to passe, that trumpets and all musicall instruments may be heard and not seene, and also that trees shall bend and incline, according to the conjurors will, he is excellent among familiars, and hath nine and twentie legions.

Amduscias governs twenty-nine legions. His true form is as a unicorn, but appears as human form when summoned. He will give concerts if commanded, and is accompanied by the sound of trumpets and other musical instruments. Trees also bend to his command.