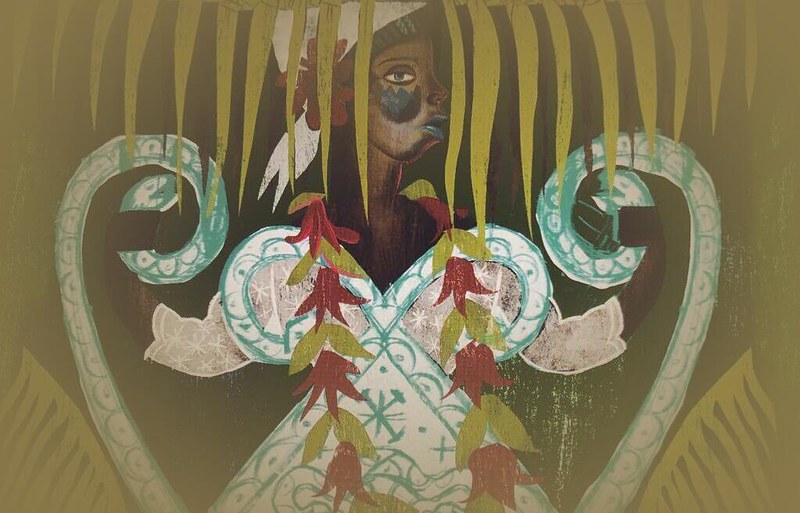 Ayizan is Queen of the Marketplace and a spirit of initiation. She is the lwa of primordial ancestors and the repository of mystic spiritual secrets. Ayizan is the spirit of the very first Vodou priestess (Mambo or Manbo). She is among the most primordial of spirits and must be treated with extreme respect. Address her politely as Mambo Ayizan. Should one be making offerings to a number of spirits, Ayizan must be among the first honored, if not the very first.

Ayizan’s name may mean “sacred earth.” In the Fon language of Dahomey, from whence she derives, Aïzan refers to earthen mounds heaped up in the marketplace intended to honor primal ancestors. Azan, a related word, refers to fringes of palm fronds used to demarcate sacred space.

Ayizan is old, truly among the elder spirits; she can’t be bothered with small, trivial problems. She oversees the initiation process of hounsi (Vodou priestesses). She is also the matron of women who work in the marketplace and assures their success.

Ayizan protects against the Evil Eye, malice, envy, and jealousy. She despises and punishes exploiters: rich against poor; powerful against the weak; adults against children; men against women; husbands against wives. If you perceive yourself as oppressed and exploited, she may assist you. (Don’t bother her if you’re on the wrongend of this equation.) Request that Ayizan protect you and supervise your spiritual growth.

She has an incredible knowledge and command of the spirit world. Ayizan may be petitioned to reveal information or serve as an intercessor (if she chooses). Ayizan banishes malevolent entities and exorcises them. She can cleanse and purify an area and create sacred space. She protects entrances, doors, gateways, barriers, markets, and public spaces. In her book, Vodou Visions, author and manbo Sallie Ann Glassman compares Ayizan to the Gnostic Sophia exiled in the material world: the initiatrix in the marketplace.

She appears in natural phenomenon: palms and earth mounds but also as an elderly woman.

Ayizan is represented by a palm branch or earthen mounds, anointed with oil and surrounded by palm fronds. Images of Saint Anne, to whom she is syncretized, or Christ being baptized by John the Baptist (his initiation) also represent her.

As Queen of the Marketplace, Ayizan is Mrs. Legba. As Grand Initiatrix, her mate is Papa Loko.

Women who seek Ayizan’s protection for home or store should obtain blessed palms (whether on Palm Sunday or via other rituals). Fix them into the shape of an X or cross and hang over your door while invoking Ayizan’s blessings.

The historic Don Petro is credited as the founder of the Petro Vodou tradition. Jean-Philippe Pedro was a Vodouiste and leader of Maroons. The word…

The Haitian Revolution was initiated at a Vodou ceremony at Bois Caiman when a priestess (Mambo) sacrificed a black pig, invoking the lwa, Ezili Dantor,…

Minona ORIGIN: Fon (Benin, formerly Dahomey) Minona, powerful spirit of magic, lives deep within the forest. She presides over women and the home. Minona is…

Gran Bois is the Father of the Forest, a divine healer who presides over botanical secrets and the sacred power of the forest. He is…