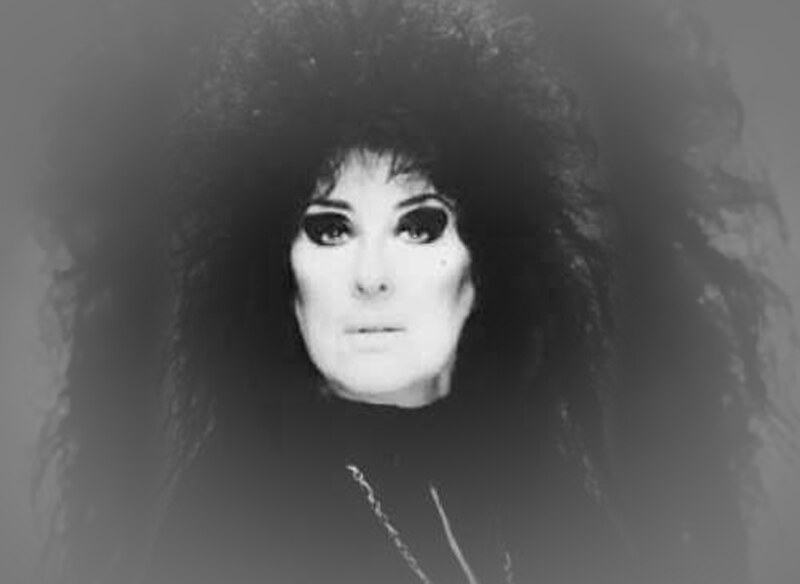 Laurie Cabot (1933- ) Witch, author, artist, businesswoman, civil rights watchdog and founder of two traditions of contemporary Witchcraft. Known as “the Official Witch of Salem” in Salem, Massachusetts, Laurie Cabot has attracted attention for her dramatic dress of flowing black garments and pentacle pendants, which she always wears when in public.

Cabot (her maiden name) is descended from a line of Cabots from the Isle of Jersey off the coast of England, a place renowned for its witchcraft. An only child, she was born March 6, 1933, in Wewoka, Oklahoma, during a family move from Boston to Anaheim, California. Her father was a businessman. From an early age she felt an affinity with witches, although she did not know exactly what a witch was. According to Cabot, her heritage includes a long line of witches, including a mysterious woman who lived some 4,000-5,000 years ago whose genetic memory Cabot feels she possesses nearly intact.

By age six, her psychic gifts became apparent, and she constantly was in trouble for discussing information she picked up through extrasensory perception. From her father, a science-oriented man who did not believe in the Devil, Cabot developed a lifelong interest in science, which she dovetailed with her interest in witchcraft, the occult and the paranormal.

From Anaheim, Cabot returned to Boston at age 14 with her mother in order to finish high school. She embarked on a comparative study of religions and spent much time in the library. There she met a woman on the staff who encouraged her to look beyond Christianity for information on paranormal phenomena. The woman eventually revealed she was a Witch and introduced Cabot to two other female Witches, one of them elderly. The three women helped to school Cabot in the Craft. When she was 16, the Witches initiated her in a profoundly transformational experience. She was anointed with oil and dubbed with a sword. She took the sword, impaled it in the earth, and said, “I return to earth my wisdom and I call myself Witch.”

Cabot made a life’s projection for herself, in which she asked the Goddess and God to enable her to teach Witchcraft as a science.

After high school, Cabot did not follow through on plans to attend Smith College, but instead became a dancer in Boston’s Latin Quarter. She was married twice, first to an Italian and then to a Greek, and had a daughter by each husband: Jody in 1963 and Penny in 1965. After her second divorce, in the late 1960s, Cabot and her daughters moved to the north end of Boston. She made a vow that she would live her life “totally as a Witch”: she would wear nothing but traditional Witch clothing (which she says is long black robes), wear her pentacle displayed, and would emulate the Goddess by outlining her eyes in black makeup, according, she says, to an ancient tradition.

She admits she was naive in not realizing how such attire would provoke people and in thinking that as soon as she explained herself, others would understand and accept her. Over the years, she has had to deal with jokes, aversion and accusations that her dress is for purposes of commercial exploitation.

At the urging of a friend, Cabot moved to Boston, where she and the friend rented a house that was the first house built on Salem’s historic Chesnut Street, and had been home to Nathaniel Hawthorne for a year. Three years earlier, Cabot had gone through a past-life regression to see the life of a Susan Sarah Prescott who supposedly had lived in Salem during the 1700s. Cabot believes she picked up on traces of a genetic memory. She discovered that Prescott had indeed existed and that her father had been the builder of their house. She stayed in the house one year.

Cabot also discovered that Salem had little idea what to think of modern Witches. Members of the public derided her for believing “in all that,” and other Witches criticized her for her appearance. Through a new friend, she began teaching “Witchcraft as a Science” classes for the public, forming the beginnings of her Science Tradition of Witchcraft. She also taught classes for seven years in the Salem State College continuing education program.

She opened The Witch Shop in Salem, which did not do well and closed; a second venture, Crow Haven Corner, was successful and has become a tourist attraction in Salem. Cabot turned the shop over to daughter Jody in the late 1970s.

In 1973, Cabot established the annual Witches’ Ball, a costume party to celebrate Samhain (All Hallow’s Eve) in Salem, which each year draws an international crowd of participants and media.

Since 1971, Cabot had sought to be named “the Official Witch of Salem,” but was turned down by local government; then-Mayor Samuel Zoll was quoted saying he thought it would be “improper” and that “the historical recognition of the city would be internationally demeaned by allowing a commercial capitalization by one individual.” In 1977, Michael Dukakis, then governor of Massachusetts, signed a citation granting Cabot the title. The “Paul Revere” citation, as it is called, is recognition given to various citizens courtesy of members of the legislature. Cabot received hers for her work with dyslexic children.

Cabot has long urged Witches to take a stronger stand for their civil rights and public image. In 1986, she founded the Witches League of Public Awareness to serve as a media watchdog and civil rights advocate for Witchcraft.

She entered the Salem mayoral race in 1987 after incumbent Anthony V. Salvo made derogatory comments about Witchcraft and Witches in the press. One of Salvo’s opponents, Robert E. Gauthier, a friend of Cabot’s, was rumored to be a “warlock,” a term not favoured by Witch- es of either sex. Gauthier denied this and blamed the Salvo camp for spreading the rumors. Salvo denied the accusation, saying he discounted witchcraft, and no one with “average intelligence” believed in it. Cabot jumped into the race “to prove that Witches have civil rights” and ran a spirited campaign that attracted local support and national media attention. But on August 11, the deadline for returning nominating papers, she dropped out of the race, citing business commitments, including work on a book. Cabot continued to serve Salem as a member of the executive board of the Chamber of Commerce, which she joined in 1980.

In 1955, Cabot founded the Cabot Tradition of the Science of Witchcraft (originally called Witchcraft as a Science), which she described as Celtic and “pre-Gardnerian” (see Gerald B. Gardner). It teaches practical magic and adheres to the Wiccan Rede (“Do what you will and harm none”) and the Threefold Law of Karma (everything one does returns threefold). Classes and workshops in the science tradition continue; one of Cabot’s premier students is Christopher Penczak. Cabot also teaches classes in Witchcraft as religion and art.

Cabot’s books include Practical Magic: A Salem Witch’s Handbook (1986); The Power of the Witch, with Tom Cowan (1990); Love Magic, with Tom Cowan (1992); Celebrate the Earth: A Year of Holidays in the Pagan Tradition, with Jean candles 49 Mills and Karen Bagnard (1994); and The Witch in Every Woman: Reawakening the Magical Nature of the Feminine to Heal, Protect, Create and Empower, with Jean Mills (1997).

Cabot maintains a full schedule of teaching classes, giving readings and making public appearances. She is active in community work, including a tree-planting program for the Salem area. She continues to host the annual Witches’ Ball at Samhain, and she is involved in Wiccan/Pagan civil rights issues. In 2007, she founded the Project Witches Protection, an educational organization “dedicated to correcting misinformation and Witches and Witchcraft.”

This tradition holds that Witchcraft is a science as well as a religion and an art. As a science, it may be applied to harness and expand psychic potential. The key to extrasensory perception is the harnessing of light energy and the sensitivity to alpha waves, which are part of the aura surrounding every living thing. Cabot says her method of controlling alpha waves is based on an ancient Pythagorean method of using colors and numbers.

Cabot teaches that each individual is responsible for all his or her thoughts and actions. The Wiccan Rede, “An’ it harm no living thing, do what you will,” is extended to defending oneself against evil energy or psychic attack. While other traditions hold that it is acceptable to boomerang psychic attack back to the sender, the Cabot Tradition considers this a violation of the Rede. Instead, practitioners are taught to erect a psychic neutralizing shield, which enables them to either transform the energy so that it can be used in a positive fashion or disintegrate it so that it harms no one, including the sender.

The Cabot Tradition includes practitioners of all other traditions; therefore, rituals are eclectic. Practitioners wear black, which the tradition considers to be the traditional witch’s colour. Cabot notes that black absorbs light while white reflects it; this absorption of light facilitates psychic power. To further augment power, practitioners wear gold jewellery for psychic strength, usually in the form of a pentacle pendant. At least one piece of silver jewellery is worn for its psychic power properties.

In addition to Craft basics and history, instruction includes parapsychology; physiology; astrology; geometric structure; sociology; anthropology; meditation; aura reading, balancing and healing; the use of crystals; and the psychic arts. The Cabot Tradition traces the origins of the Craft to the Celts. The tradition teaches past-life regression and Cabot’s theory of the Root Races of humankind, which holds that humans come from other planetary systems. According to Cabot, alpha waves store all knowledge of the universe, and a person who enters an alpha trance may pick up on vibrations from the past.

Correction: Apr. 23, 2020
We changed the URL of Laurie Cabot her website because the URL does not exists anymore.

The earth, the moon, and the magical path to enlightenment. Written by a practicing witch who conducts classes and seminars on witchcraft—the oldest Western religion,…

Penczak, Christopher (1973– ) Witch and popular author of books on Witchcraft and Magic. Christopher Penczak was born on may 10 in Lawrence, Massachusetts. He…

Witches League of Public Awareness International educational organization based in Salem, Massachusetts, which works to end prejudice and bigotry against Witches and Witchcraft, especially in…

Ann Hibbins (d. 1656) was a prominent Boston woman convicted of witchcraft and executed. Her chief crime as a witch seemed to have been a…

Good, Dorcas (17th century) Youngest victim of the Salem Witches hysteria of 1692–93. Dorcas Good was the daughter of sArAh good, one of the first…