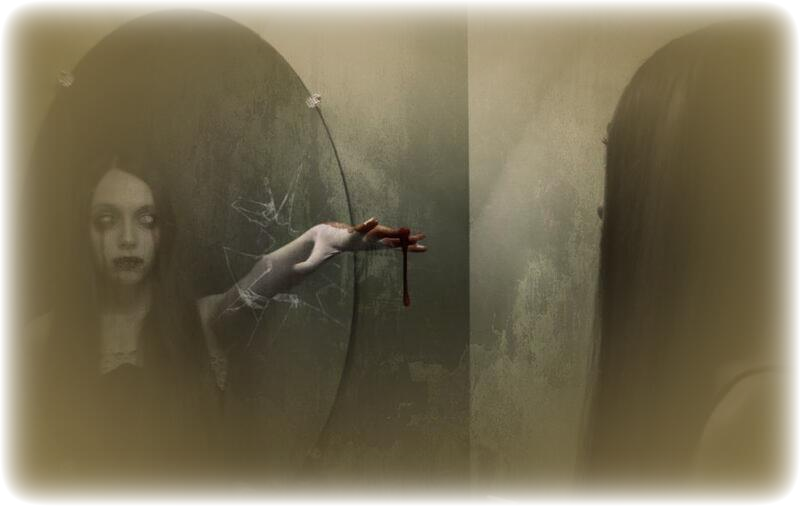 In Russian folklore, mirrors are the invention of the Devil because they have the power to draw souls out of bodies. Similarly, superstition holds that mirrors, and in some places of the world all shiny surfaces, must be covered in a house after a death to prevent the soul of the living from being carried off by the ghost of the newly departed. The mirrors are covered for a variety of reasons, depending on the local lore: one will see the corpse looking over one’s shoulder and be frightened; if the corpse is seen in the mirror the soul of the dead one will have no rest; one will see a ghost; the soul of the dead will be carried off by a Ghost. Covering is also done out of respect for the dead.

Mirrors should be removed from a sick room, it is widely believed, because the soul is more vulnerable in times of illness. It is considered very unlucky for the sick to see their reflections, which puts them at risk of dying.

It is also considered very unlucky to look into a mirror at night or by candlelight—one will see ghosts, the Devil or something uncanny, which will portend death. An old Persian spell claims that ghosts may be seen in a mirror by standing in front of it and combing the hair without thinking, speaking or otherwise moving.

Many cultures have beliefs that a person who sees his reflection in anything will soon die. In Greek myth, Narcissus saw his reflection in water and then pined and died. The ancient Greeks also believed that even dreaming of seeing one’s reflection was a Death Omen. A widely held superstition is that looking into a mirror following a death means one will die. In Ozark lore, the appearance of a distant friend in a mirror means he or she will soon die.

Breaking a mirror means seven years of bad luck, and also means death in the family or household. For example, if a child breaks a mirror, one of the children in the house will die within the year. See Death Omens.

One of the most ancient forms of Divination is crystallomancy or catoptromancy, performed with a magic mirror. The magi of Persia are said to have…

A mirror is according to folklore, a doorway or portal through which spirits, including ghosts and Demons, can gain access to the physical world. Mirrors…

Doors : Numerous superstitions exist concerning doors and ghosts of the dead. It is widely believed to be unlucky to enter a house through the…