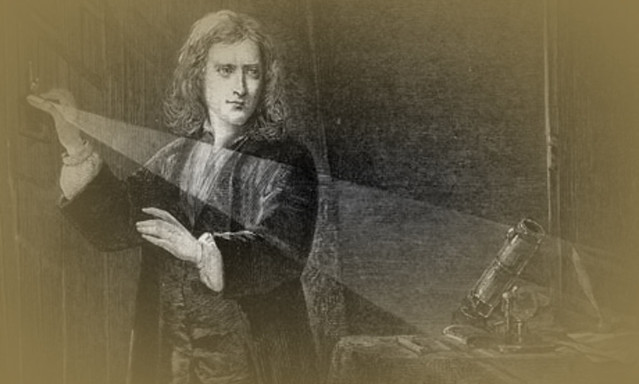 Sir Isaac Newton (1643–1727) English scientist, physicist, and mathematician who is credited generally with establishing modern science, paving the way for the breakthroughs of the 18th century and the eventual rise of the Industrial Revolution. His contributions to the fields of mechanics, physics, optics, thermodynamics, and mathematics, but most especially his discovery of the laws of gravitation, have earned him a place as one of the most influential people of all time.

Newton was also an avid alchemist, spending years on occult studies and searching for the Philosopher's Stone. He pored over ancient manuscripts and tracts, looking for the secret codes that would explain how metals could be made to multiply. Ironically, it was Newton’s acceptance of the Hermetic principles of sympathy and antipathy—attraction and repulsion—in ether that enabled him to discover the quantitative principles of what is known as Newton’s Third Law: that for every action there is an equal and opposite reaction. Newton’s reconciliation of  empirical science and pseudo-science could be his greatest achievement.

Like many other geniuses, Newton’s brilliant analytical mind was often overshadowed by his anger, insecurity, pride, obsessiveness, and vengeful nature. The infant Isaac was not expected even to live much less become famous. He was born on January 4, 1643, in Woolsthorpe, Lincolnshire, to Hannah Ayscough Newton; his father, Isaac Senior, died three months before his birth. Within two years the young widow married a well-to-do minister named Barnabas Smith and moved away to raise a new family. Newton was raised by his grandmother until Smith died in 1653 when his mother returned and tried to resume relations, failing miserably. Newton hated his mother and stepfather, and later biographers attribute his psychotic behaviors to his early abandonment.

A child prodigy, Newton attended Grantham Grammar School and in 1661 entered Trinity College, Cambridge, where his uncle William Ayscough had gone. Already fascinated by the work of Kepler, Galileo, Descartes, and Copernicus, Newton chafed under the traditional study of Aristotelian notions of the “natural” world as taught by not only Cambridge but also by every other major university in Europe. Newton began to study the new philosophers avidly on his own. But Newton also read the work of Henry More, a Cambridge Platonist and alchemist.

Newton received his degree from Cambridge in 1665, the same year he discovered the binomial theorem of mathematics, the precursor to calculus. He was forced to leave Cambridge and work at home, however, as the university had closed to avoid the Great Plague of 1665–66. Besides inventing differential calculus—a form of mathematical analysis that uses infinitesimal changes to find the slopes of curves and the area under those curves—Newton spent time alone in his laboratory, cooking up alchemical processes and reading occult lore. He also studied the refraction of white light into colors through a prism and worked on his theories of planetary orbits and how to calculate them.

When the university reopened in 1667, Newton became a Fellow. That same year he published the treatise De methodis serieum et fluxionum (On the Methods of Series and Fluxions) that alluded to his discovery of calculus but did not specifically explain it. Independently, German philosopher and mathematician Gottfried Wilhelm Leibniz had discovered the calculus, and most scientists found Leibniz’s notation superior to Newton’s (although German mathematicians prefer Newton’s notation). Never one to share credit, Newton accused Leibniz of plagiarism and persecuted him for 25 years.

In 1669 Isaac Barrow, the Lucasian professor of mathematics at Cambridge, resigned and nominated Newton for the post. At that time one had to be an ordained minister to teach at Cambridge or Oxford; yet the terms of the Lucasian post required that the holder not be active in the church, supposedly leaving more time for scientific endeavors. Newton, a secret Unitarian, petitioned King Charles II to excuse him from the necessity of ordination based on the requirements of the position, which he received. Newton was always careful to hide his true feelings about the Trinity for fear of reprisal.

By 1671 Newton had invented a reflecting telescope that eliminated the refraction of light into color, which interfered with observation. The Royal Society, purveyor of all the new scientific discoveries in England, asked for a Demonstration, and Newton published his findings in a paper entitled Opticks. Society member Robert Hooke criticized some of Newton’s findings. Newton was so offended that he withdrew from public debate about his work and counted Hooke his enemy until the man died. Newton published a second tract on colors in 1675, but Hooke claimed that Newton had stolen his ideas. Newton lashed out at Hooke again and also vented his spleen at a group of English Jesuits who questioned his theories. Angry, formal correspondence between Newton and the Jesuits continued until 1678, at which time Newton sent one last furious letter, suffered a nervous breakdown, and then said no more. Newton’s mother died the next year, adding to the man’s anguish. He retreated into his laboratory for six years.

His self-imposed isolation gave him more time to read occult tracts and practice his Alchemy, an often dangerous pastime in the 17th century because heads of state feared financial ruin from anyone who might actually create more GOLD than the king had in his treasury. The punishment was death. Newton was convinced that there were secret codes in the Bible or in the languages that had been used in ancient times that would allow him to predict the future. It was a strange course for someone who conducted empirical research to believe that esoteric evidence was merely waiting to be found and deciphered. Newton constructed a floorplan of King Solomon’s temple that he claimed was really a template for esoteric knowledge. He read extensively from the works of “Eirenaeus Philalethes,” also known as GEORGE STARKEY (1628–65), the first well-known American “chymist.” Newton may have been a FREEMASON.

One of Philalethes’s (his name means “peaceful lover of truth”) alchemical discoveries that inspired Newton was “the Net,” or a purple alloy of antimony regulus and copper whose surface was covered in a grid pattern of crystals separated by spaces. This alloy tied in with a story from Greek mythology, also believed to be code, as follows:

Venus and Mars were found in bed by her husband, Vulcan. He made a fine metallic net and hung the lovers from the ceiling in it in front of all the other gods on Olympus.

The code is that in alchemy—a pursuit cloaked in mysterious symbols and metaphors—Venus is copper, Mars is IRON, and Vulcan is fire. Hence Venus is the copper in the alloy mixed with antimony regulus, itself reduced from antimony sulfide by the addition of iron (Mars) and then placed in intense heat (Vulcan). This is the recipe for the Net.

Newton continued working on gravitation and its effects on planetary orbits during his exile. In 1684 astronomer Edmond Halley visited Newton to solve the problem of orbital dynamics. Newton claimed that he knew the answer, giving Halley a small tract called De Motu (On Motion). This paper became the germ for Newton’s masterwork, the Philosophiae Naturalis Principia Mathematica (usually called the Principia), in which he laid out all his principles of math and physics and introduced Boyle’s Law: a treatise on the speed of sound in air. The three Newtonian laws are:

1. That a body remains at rest (inertia) unless its state is changed by the exertion of force upon the body;

2. That change of motion is proportional to the force used, and

3. That for every action there is an equal and opposite reaction.

By analyzing circular motion using his laws, Newton developed a formula for the centripetal force necessary to change a body—in this case a planet or a Moon—from a rectilinear path to a circular or elliptical one. Newton named this force gravity, from the Latin gravitas. The law of gravity, therefore, establishes that every particle in the universe attracts every other particle with a force proportional to the product of their masses and is inversely proportional to the square of the distance between the particles’ centers. Biographers now agree that the anecdote about the falling apple as the impetus for his theory of gravitation was invented to show how Newton could gain inspiration from everyday objects.

Publication of the Principia in 1687 brought Newton international prominence. During this period Newton formed a close relationship with the Swiss-born mathematician Nicolas Fatio de Duillier. Fatio lived in London and suggested Newton seek work there. Newton tried for several years, finally securing the position of Warden of the Mint in 1696 through the offices of Charles Montague, Lord Halifax. But by then he had broken off with Fatio, who had become ill and plagued with financial and family problems. Newton pleaded with Fatio via an intense flow of letters to move to Cambridge where he would take care of him, but in 1693 the letters and relationship abruptly ceased with no explanation. Newton sent wild letters to Samuel Pepys and John Locke, accusing them of trying to snare him with women; then he succumbed to a second breakdown. He briefly returned to science one last time with the publication of a treatise on rates of cooling in 1701.

Newton’s later years were devoted to his duties at the Mint and study of the Bible. He also served in Parliament. As Warden of the Mint he oversaw the “great recoinage,” and when he rose to Master in 1699 he also pursued counterfeiters and anyone debasing the currency. Seeking counterfeiters in the taverns and brothels of London gave Newton a socially acceptable way to vent his rage, and he sent many to the gallows.

In 1703 Newton’s nemesis Hooke had died, and he assumed the presidency of the Royal Society. Annoyed that John Flamsteed, the Astronomer Royal at the Observatory in Greenwich, would not give him all his data that he had collected on stars and planets, Newton began a campaign to form a group of “visitors” that would oversee the observatory. Newton, of course, was chairman and tried to force the immediate publication of Flamsteed’s star catalogue, giving the task to Flamsteed’s enemy, Edmond Halley. Nearly 10 years later Flamsteed succeeded in taking back his work by court order. Newton retaliated by removing any reference to Flamsteed in the Principia.

Queen Anne knighted Newton in 1705, the first scientist to be so honored. The end of his life was spent revising his earlier works and fighting with his enemies over slights and perceived plagiarisms. He never married nor had any known children. Newton died on March 31, 1727, and was buried in Westminster Abbey.

Dan Brown, author of The Da Vinci Code, used Newton’s resting place as the last piece in the instructions for locating the Holy GRAIL. In the novel, Leonardo da Vinci had invented an encoded cylinder called a cryptex to carry secret messages. To open it the rotating components had to be correctly aligned, and the right order usually involved the answer to a riddle. The final puzzle piece in the search was to locate “the orb above the tomb of a knight a pope interred.” The orb is Newton’s legendary APPLE, and he is the knight buried and eulogized by A. (Alexander) Pope.

Until the 20th century, few scientists or biographers knew of Newton’s alchemical efforts. But in 1936 a cache of Newton’s papers and journals—described as having no scientific importance—were bought by the economist Lord John Maynard Keynes. Lord Keynes surprised the members of the Royal Society Club in 1942 with his revelations of Newton’s search for the philosopher’s stone and the Elixir OF LIFE. Lord Keynes commented in his now-famous assessment of Newton that, “Newton was not the first of the Age of Reason. He was the last of the magicians.”