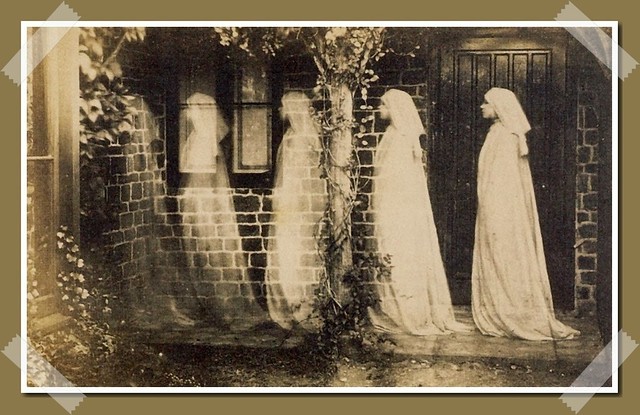 Phantom nuns are Ghosts allegedly belonging to women of the church, some of whom met violent ends, either as victims of religious persecution or because they were punished for transgressions.

Phantom nuns haunt religious buildings or buildings built on the former site of religious institutions. Many cases have been documented in England. Holy Trinity church in Micklegate, York, is said to be haunted by the ghosts of an abbess, a woman and child. The abbess was associated with a Benedictine priory that once stood on the site.

She met her death when she defied soldiers who came to destroy the priory during the Reformation by saying they would enter only over her dead body. They killed her, and as she lay dying she promised to haunt the site until another sacred building was built. She kept her promise until the abbey ruins were destroyed, whereupon she moved into the church.

The plague soon claimed the woman, who was buried alongside her husband. It is thought that the spirit of the abbess brings the child from its grave to visit the parents’ graves, because the mother’s spirit could not rest without her child. During the Middle Ages, it was common practice for nuns to have their cell doors bricked up, leaving just a small window for receiving food.

The ghost that haunts the Theatre Royal in York is that of a nun from the time that a hospital run by nuns stood on the theater site from the 12th to 18th century. Supposedly, the nun broke her vows and her punishment was to be walled up alive. Visitors and actors alike have seen the gray and white apparition, most often in a small room near the dress circle.

A phantom fountain of blood is said to appear at this haunted abbey, constructed by William I (William the Conqueror) on the site of his…

Phantom monks are ghosts of monks and other ecclesiastical persons that haunt various religious sites: abbey ruins, churches and vicarages built on the sites of former monasteries, modern-day cathedrals and churches, and dwelling places.

The Langenhoe Church is a haunted church and manor house near Colchester, Essex, England. Peter Underwood investigated the Haunting activity over a 12-year period and…