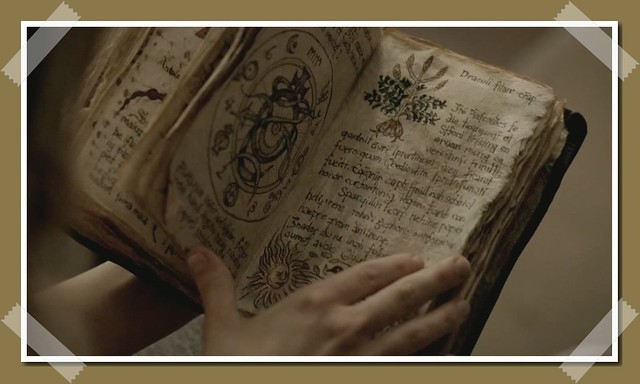 The book of shadows is in contemporary witchcraft and Wicca, a book of beliefs, rituals, Witchcraft laws and ethics, herbal and healing lore, incantations, chants, dances, spells, divination methods, rituals and miscellaneous topics that serves as a guide for Witches in practicing their Craft and religion. There is no definitive book of shadows for Witchcraft in general; each tradition may have a standard book of shadows, which may be added to or adapted by separate covens (see coven). In addition, individual Witches add their own personal material. The book is to be kept secret, but some Witches have gone public with their books of shadows over the years (see Lady Sheba).

Material is given according to the Witch's position in the hierarchy. As a Witch advances in skill and in the hierarchy — the most common system is one of three degrees — more material is provided. The book of shadows cannot be kept by a Witch if he or she leaves the coven.

Gerald B. Gardner, considered the father of contemporary Witchcraft, claimed that when he was initiated into his coven in 1939, he inherited a fragmentary book of shadows representing the coven's alleged historical tradition. Gardner, who believed Margaret Alice Murray's ideas about an unbroken lineage of witchcraft as a religion since ancient times, claimed his coven was part of this heritage. Murray's theories were later proved to be without merit, and similarly Gardner's claim of an ancient Witch religion evaporated.

The true origins of his book of shadows have been disputed for decades. It is unlikely that such books existed in earlier times, as folk Magic generally was passed orally through the generations.

Gardner wrote down some rituals in an unpublished manuscript called Ye Bok of ye Art Magical, and published some rituals allegedly taken from his book of shadows in a pseudonymous novel, High Magic's Aid (1949). There is evidence that he drew from a variety of sources, including Murray, The Greater Key of Solomon (a magical GRIMOIRE), James G. Frazer, Robert Graves, the Aradia legend of Charles Leland, various classicists, Aleister Crowley, Rosicrucianism, Freemasonry, and the Hermetic Order of the Golden Dawn and other sources. Most likely, most of this material — to which Gardner probably made his own additions — was assembled between 1947 and 1950.

In 1952, Gardner met Doreen Valiente and initiated her into his coven in 1953. Valiente, a good writer with a poetic flair, helped him revise the rituals and write additional ones; she accepted the book as a product of a long witchcraft heritage but objected to the Crowley material and removed most of it, substituting simpler wording, including her own poetry. She also gave more emphasis to the Goddess. It is estimated that she may have contributed up to half of the book of shadows by the mid-1950s.

Regardless of its origins, the book of shadows is a living text in contemporary Witchcraft. It reflects the practices and beliefs of each individual coven and the interests or specialties of the individual Witch. It can be a dynamic collection of information, with additions being made as necessary.

According to tradition, a Witch's book of shadows is destroyed upon death. Gardner's original book of shadows, however, was passed to Valiente after his death. Other books of shadows are passed on as keepsakes and documents of historical significance.

One of witchcraft’s most widely known figures, Doreen Valiente was a close friend of the late Gerald Gardner, generally regarded as the founder of modern…

Lady Sheba (d. 2002) Self-described “Witch Queen” who rose to prominence in American Witchcraft in the late 1960s and 1970s. She set a precedent in…

Answering many of the most frequently asked questions about witchcraft, such as How can I find a witches’ coven? and How can I become a…

Doreen Valiente (1922–1999) was an English high priestess and one of the most influential Witches in the Witchcraft revival and emergence of WICCA. An early…

Dafo The pseudonym or magical name of the woman who initiated Gerald B. Gardner into witchcraft around 1939-40. The identity of Dafo remains uncertain. She…