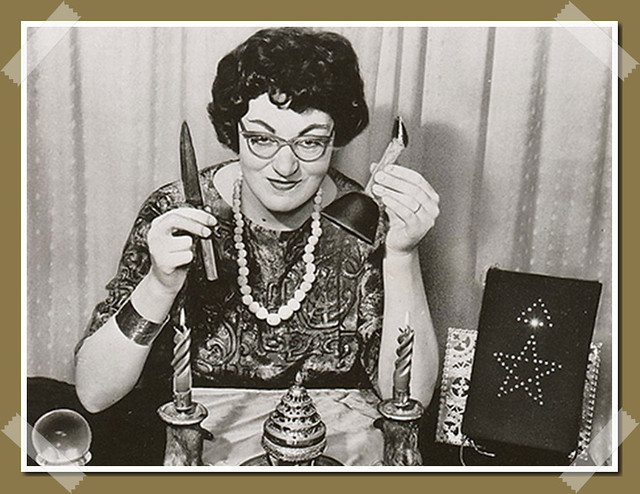 Doreen Valiente (1922–1999) was an English high priestess and one of the most influential Witches in the Witchcraft revival and emergence of WICCA. An early initiate of Gerald B. Gardner, DoreenValiente wrote and coauthored with Gardner the basic Rituals and other materials that shaped the evolution of Witchcraft/Wicca as both craft and religion. Gardner gets the credit for launching the Witchcraft revival, but Valiente deserves the credit for giving it an appealing and enduring depth and texture.

Valiente was born Doreen Edith Dominy on January 4, 1922, in Mitcham, south London, to a devout Christian couple, Harry Dominy, an architect and quantity surveyor, and his wife, Edith. She was given an Irish first name, perhaps because her parents had been to Ireland before she was born. In early childhood, she lived nearly Horley in Surrey, where she had a mystical experience while gazing at the moon. She saw that behind ordinary reality was a reality far more potent, which she later described as “the world of force behind the world of form.” This new perception connected her years later to Witchcraft.

After Surrey, Doreen’s family moved to the West Country, where she became fascinated by the magical folklore. As a teenager, she began casting her own spells and even did a spell to stop harassment of her mother, who worked as a housekeeper for an ill-tempered woman. Doreen persuaded her mother to obtain a few strands of the woman’s hair. She wound the hair around a poppet containing herbs and pricked with black-ended pins and cast a spell of protection for her mother. The woman then suffered harassment by a blackbird and stopped harassing Doreen’s mother.

Her parents tried repeatedly to steer her toward Christianity and sent her to a convent school. She left at age 15 and never went back. By her late teens and early 20s, she was very aware of her own psychic abilities. She read extensively in occult literature, including the Theosophists and Aleister Crowley and especially admired Dion Fortune.

At age 19, Doreen went to work as a secretary in Barry, South Wales. There she met Joanis Vlachopoulos, 32, an illiterate seaman with the merchant navy based in Cardiff. They were married on January 31, 1941. Six months later, Vlachopoulos was reported missing at sea and presumed dead, a casualty of World War II. Doreen remained for a while in Wales and then moved to London.

On May 29, 1944, Doreen married Cosimo Valiente, a convalescing refugee from the Spanish civil war, who had gone on to fight with the Free French Forces, was wounded and sent to England to recover.

After the war, Valiente and her husband moved to Bournemouth near the New Forest. In 1951, the Witchcraft Act outlawing witchcraft was repealed in Britain and was replaced by the Fraudulent mediums Act. On July 29, 1951, Valiente’s attention was caught by a newspaper article about CecilWilliamson and his opening of his Folklore Centre of Superstition and Witchcraft (see Museum of Witchcraft) on the Isle of man. The article, headlined “Calling All Covens,” mentioned a coven in the New Forest. Valiente wrote to Williamson for information, and he passed her letter on to Gerald B. Gardner. After a period of correspondence, Gardner invited Valiente to meet him for tea one afternoon at the home of Dafo, the woman who had initiated Gardner into the New Forest coven.

Gardner did not press Valiente to join his coven but gave her a copy of his novel, High Magic’s Aid. It was his test of potential initiates, to see how they would react to the descriptions of ritual nudity (skyclad). Valiente was not put off, and so passed the test.

On Midsummer’s Eve 1953, Gardner initiated her into his coven. He conducted the ritual at the home of Dafo in Christchurch, Hampshire, where he stopped en route to Stonehenge for a Druid solstice ritual. Valiente took the Craft name of Ameth. Her husband had no interest and did not join but accepted her involvement in the Craft. To other members of her family, Valiente explained that she had joined a Druid order, which was considered respectable.

For the initiation, Gardner used his own Book of Shadows, a collection of ritual and Craft material he said came from his New Forest coven. Valiente, by then well read in occult literature, recognized portions of the rite as coming from Aleister Crowley’s Gnostic Mass and Charles Godfrey Leland’s Aradia.

Gardner gave Valiente his book of shadows and other ritual material that he claimed came from the hereditary New Forest witches. Valiente recognized more material from Crowley and Leland and also from Rudyard Kipling, freemasonry, and the Key of Solomon. She politely accepted Gardner’s assertion that it had been handed down over a long lineage of Witches practicing Witchcraft as a pagan religion, but privately she always believed that he was rankled to know she saw through the story. Valiente told Gardner that the Crowley material especially should come out because of Crowley’s unsavory reputation.

From 1954 to 1957, Valiente collaborated with Gardner in reworking the book of shadows, using her considerable poetic gifts to improve and flesh out the material. The book of shadows served as the basis for what became the Gardnerian tradition, still the dominant tradition in contemporary Witchcraft.

Some of Valiente’s contributions are considered the most beautiful in the Craft and have passed into common use, most notably the Charge of the Goddess (reworked from Crowley and Leland) and “The Witches’ rune.”

Valiente is credited with increasing the emphasis on the Goddess, which helped to transform the Craft into a full-fledged Pagan religion. Valiente said that the God and Goddess elements were already present when she received the material from Gardner.

Gardner was not an easy person to work with. His egotism and publicity-seeking tried the patience of members of his coven, including Valiente, who became high priestess. Splits developed in the coven over Gardner’s relentless pursuit of publicity and over his fabricated “ancient” Craft laws, which chauvinistically gave dominance to the God and required the high priestess to retire when she got to be too old.

By 1957, Valiente and others who had had enough of “the gospel according to Gerald” departed the coven. Valiente and another coven member, Ned Grove, formed their own coven. Eventually, she patched up her friendship with Gardner and remained friends with him until his death, although she never worked with him again.

After Gardner died in 1964, Valiente was initiated into the Clan of Tubal Cain by Robert Cochrane, a flamboyant man who claimed to be a hereditary witch practicing a tradition handed down through his family. Valiente fell out with him after determining that his story was more fiction than fact. She also did not like his open disdain of Gardnerians and his drug habits. Cochrane apparently committed “ritual suicide” with belladonna in 1966.

From 1964 to 1966, Valiente received a series of spirit communications from a spirit who said he was “Jack Brakespeare,” a “traditional witch.” The communications began one night as Valiente was in a hypnagogic state (the borderline between wakefulness and sleep), in which she saw a group of robed people engaged in a ritual in the corner of a field by moonlight. She began to communicate with Brakespeare, whose small coven lived in Surrey around the early 19th century. The communications were sporadic. Valiente surmised that the purpose behind them was to pass on information about the old ways.

Cosimo died in April 1972. Valiente began to spend more time writing and published her first book, An ABC of Witchcraft, in 1973. That was followed by Natural Magic (1975) and Witchcraft for Tomorrow (1978), which incorporate material from her Brakespeare communications. Witchcraft for Tomorrow was written in response to years of plagiarism and distortion of her creations for the book of shadows. The book includes Liber Umbrarum: The Book of Shadows, a new and simplified book of shadows for persons interested in initiating themselves and organizing a coven. Valiente wrote her autobiography, The Rebirth of Witchcraft, published in 1989. In addition to her books, Valiente wrote numerous articles.

During the 1970s, the British parliament considered reinstating a version of the Witchraft Act making witchcraft illegal. Valiente lobbied against this. New laws were never passed.

In 1980, Valiente initiated a search for Old Dorothy Clutterbuck, the high priestess whom Gardner said initiated him in 1939. So little was known about Clutterbuck that historian Jeffrey B. Russell implied in his book, A History of Witchcraft: Sorcerers, Heretics and Pagans (1980), that Clutterbuck may have never existed at all. Valiente made a diligent search through records and, by 1982, discovered Clutterbuck’s birth and death records and her will, which are now published on the Internet. Valiente’s account of her research is related in A Witch’s Bible by JAnet And Stewart Farrar, and in Valiente’s autobiography.

In 1995, Valiente became a patron of the Centre for Pagan Studies, founded by her high priest, John Belham-Payne. In 1997, her partner, ron (Cookie) “Dusio” Cooke died. In her later years, Valiente was openly critical of WICCA and its internal politics. She preferred to call Witchcraft “the Old Craft,” and favored a certain amount of secrecy on the part of covens. She said that distinctions among traditions do not matter, for “a witch is a witch is a witch.” She opposed organized religion as “an unmitigated curse to humanity.” much of the promising future for Paganism, she said, lies in feminism and the green movement.

Valiente also was critical of Gardner and some of the elements he introduced into Witchcraft. For example, she said that the Threefold Law of Return was an invention of Gardner’s. She said she did not believe that Gardner ever expected the enormous response he got. However, proving just how much of Witchcraft came from the hereditary New Forest witches or Gardner’s imagination may never be determined.

Valiente believed in Reincarnation and felt a great affinity with ancient Egypt.

Valiente was stricken with cancer in her later years. She died in a nursing home in Brighton, Sussex, on September 1, 1999, attended by Belham-Payne and his wife, Julie. Belham-Payne performed a simple Pagan service at her funeral, attended by friends. The rites are published on the Internet.

Valiente had no children. She left an extensive collection of personal papers, possessions, artifacts and copyrights to all her writings to Belham-Payne. The collection includes items made for her by Gardner and his and her original books of shadow. In keeping with her last wishes, Belham-Payne published a book of her poetry, Charge of the Goddess, in 2000.