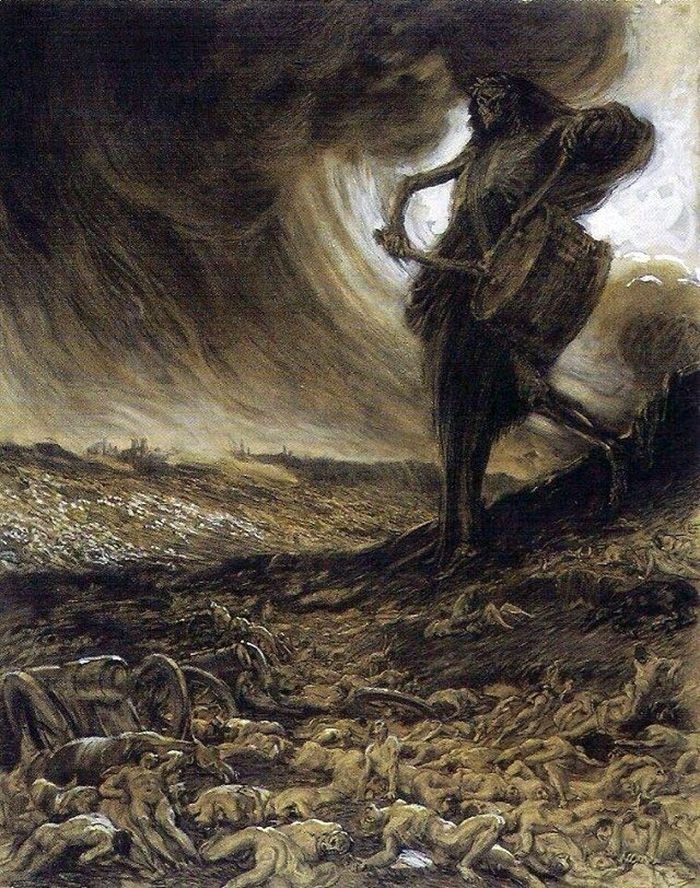 The Drummer of Cortachyis a Poltergeist haunting of the Scottish Earls of Airlie, the Ogilvys, of Cortachy Castle. The ghostly drumming was said to presage the death of an Ogilvy.

The origin of the legend dates to medieval times. It was said that a messenger of a despised chieftain appeared at Cortachy Castle one day with an unpleasant message, and the Ogilvys had him stuffed into his drum and tossed over the castle battlements. Just before he perished, the drummer vowed to haunt the family ever afterward.

For hundreds of years, the family was haunted by ghostly drumming, always followed by a death in the family. Whenever the sound was heard, the family was stricken with terror wondering who would be the next to die, and when.

One of the most famous drumming incidents occurred at Christmas 1844, when a Miss Dalrymple was staying as a guest in the castle. The evening of her arrival, she was dressing for dinner when she heard the sound of music below her room. The music presently changed to the sound of drumming, but she could not see who was doing it. She asked the maid, who knew nothing. At dinner, Dalrymple inquired of her hosts, Lord and Lady Airlie, who was the drummer. To her astonishment, Lord Airlie turned pale and Lady Airlie looked upset. Lady Airlie explained the legend, adding that the last time the drumming had been heard, the Lord’s first wife had subsequently died.

The next day, Dalrymple again heard the drumming, which spooked her so badly that she cut short her visit and left the castle.

Six months later, Lady Airlie died at Brighton, leaving behind a note that said she knew the drumming had been for her. It was speculated that she had brought about her own death to fulfil the curse.

On August 19, 1849, the ghostly drumming was again heard by an Englishman who was a guest of Lord Ogilvy, the heir to the Earldom of Airlie. The guest was travelling across the moors en route to his hosts’s shootingbox when he heard the faraway sound of band music, highlighted by drumming. He asked his Highlander guide about it, but the man said he heard nothing. Upon entering the shooting box, the guest was informed that Lord Ogilvy had departed unexpectedly, upon news that his father, the ninth Earl of Airlie, was seriously ill in London. The next day, the earl died.

However, when the succeeding earl died in the Boer War in 1900, his death apparently was not presaged by drumming—or at least no one admitted to hearing it. The drummer has not been heard since.

The Drummer of Tedworth was an English Poltergeist case for which a living agent, an irate man, took credit, and insinuated that his ability to…

In 1681, Joseph Glanvill published his treatise Saducismus Triumphatus, ‘Saduceism Defeated’ – meaning by ‘Saduceism’ the doctrine of the Sadducees mentioned in the New Testament,…

Glamis Castle : The oldest inhabited castle in Scotland, built in the 14th century, has more supernatural lore than perhaps any other castle in the…

Hermitage Castle Redcap Sly, the familiar spirit of the evil Lord Soulis, is said to haunt the ruins of this 13thcentury castle near Newcastleton, Roxburgshire,…