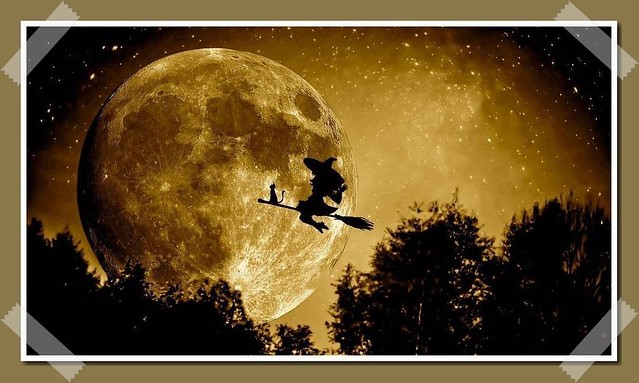 Since ancient times, the moon has been associated with woman and her fertility, monthly cycle, powers of nurturing and powers of darkness. The moon, ruler of the night and the mysteries of the dark, represents wetness, moisture, intuition, emotion, tides, the psychic, moods and madness. It embodies time, for its phases provided humankind with the first calendar. In contemporary Witchcraft, the moon is the source of Witches’ power, drawn down from the sky; it is the worker of Magic. The Great Goddess, the mother Goddess, the AllDewy-One, is at her most formidable and potent as lunar deity.

In the earliest primitive times, the moon was viewed as the source of fertility of all things. Its light was considered indispensable for abundant harvests, large flocks and herds and human fecundity. It was believed that women were made pregnant by moonbeams. Women who desired children slept under the light of the moon; those who did not resorted to crude charms, such as rubbing their bellies with spittle to avoid swelling like the waxing of the moon.

Since antiquity, lunar phases have governed all facets of life. The waxing moon is auspicious for crop planting and new endeavors, for luck and increasing; the waning moon is a time of diminishing and destruction. Lunar phases have governed magical rituals for the creation and consecration of magical tools, the summoning of spirits, the preparations of remedies and charms and the castings of spells. One cut one’s Hair and Nails, entered into marriages and business arrangements, let blood and traveled according to the phases of the moon. The moon was believed to govern the humors, the moisture in the body and brain. In 1660 one English astrologer declared that children born at the full moon would never be healthy but ran the risk of moonstruck madness, or lunacy. Folklore beliefs about the moon persist to the present day. The moon still influences magic rites.

The cycle of woman’s menstruation is tied to the lunar phases. In many cultures, the words for “moon” and “menstruation” are the same or very similar (see blood).

The Moon as person and deity.

The moon was primarily a power and a force until about 2600 b.C.e., when it became personified in middle Eastern civilizations as the man in the moon or the Great man. During his waning, the man in the moon was eaten by a dragon and went down into the underworld. He rose anew as his son. The moon also was believed to incarnate on Earth as a king; some lines of kings claimed to be the representatives of the moon and wore horned headdresses. Eventually, the man in the moon was replaced by the deity of the moon, who was first a god, then a goddess. The lunar goddess was the Great Goddess, the giver of all things in her waxing phase and the destroyer of all things in her waning phase. She took on the fertilizing power of the moon and was the protector of women. As destroyer, she could bring storms, particularly heavy rains, and floods.

The lunar gods and goddesses were portrayed with crescent moons, the auspicious symbol of the waxing and lucky moon. The Great Goddess was associated with the Cow, goat and bull, whose horns represented the crescent or horned moon.

To the Greeks, the goddess Selene once was the sole lunar goddess. Selene was replaced by Artemis (Diana) and Hecate. The true power of the moon resided in Hecate, who ruled the waning and dark moon, the time when the moon slipped into the underworld and ghosts and spirits walked the earth. Hecate became known as the Three-Headed Hecate, whose triple aspects combined Selene, Artemis and Hecate. The witches of Thessaly were said to be able to draw down the power of the moon from the sky. In myth, Aphrodite taught her son, Jason, “how to draw down the dark moon” whenever he needed magic.

The Moon in Witchcraft.

In contemporary Witchcraft, worship of the Goddess is associated with the moon. The consort of the Goddess is the Horned God, the god of the woodlands, whose horns represent both the beasts of nature and the horned moon. The activities and magic workings of a Witch or Coven are timed according to the phases of the moon. most covens meet at the full moon; some also meet at the new moon. The moon is personified by a triple aspect of the Goddess, usually Diana (the roman name is more common than the Greek name, Artemis), the Virgin, who rules the new and waxing moon; Selene, the matron, who rules the full moon; and Hecate, the Crone, who rules the waning and dark moon. magic for healing, gain, luck and increase is done during the waxing moon. magical power is greatest on nights of the full moon, particularly at midnight. magic for binding, banishing and eliminating is done during the waning phase.

The power of the moon also is drawn down for a trance ritual called DrAwIng Down the moon, in which the high priestess invokes the spirit of the Goddess into her so that She may speak to her followers.

Some feminist witches have a ritual of howling at the moon in order to connect with the primitive power of the Goddess within.

The moon is associated with the metal Silver, favoured by Witches for its properties as an amulet (see Amulets) and as an enhancer of psychic powers.

Achieve Your Desires–Tap Into the Hidden Power of the Moon! At any given moment, the moon shines down on half the world. Now, through the…

If you have you wondered what is missing from your life or why events don’t seem to go your way, keep on reading… Two manuscripts…

Ishtar The great mother Goddess of ancient Assyrian and Babylonian mythology. Ishtar was said to be either the daughter of the sky god, Anu, or…

Heng E (Change-e) Chinese goddess of the moon, a younger sister of the river god →He Bo. After stealing the pill of immortality from her…