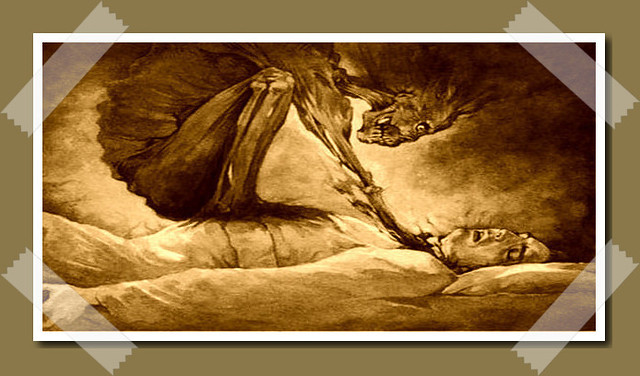 An Old Hag is a nocturnal phenomenon involving suffocation, paralysis, and supernatural Smells, sounds and apparitions, blamed on night terror, Demons or witches. The Old Hag syndrome has similarities to characteristics of Poltergeists and also has associations with reported cases of VAMPIRE attacks. The Old Hag also is related to the mara (from which the term “nightmare” is derived), a Demon that attacks humans at night and sexually assaults them.

The Old Hag has been documented since ancient times. In the second century, the Greek physician Galen attributed it to indigestion. Modern research has found that approximately 15% of the adult population worldwide experiences at least one Old Hag attack. Some individuals suffer repeated attacks over a limited period of time; others have repeated attacks for years. Science has proposed no adequate explanation for what causes the attacks and why certain persons experience them.

The syndrome takes its name from a term for witches. In the Middle Ages, it was believed that witches, or “hags” or “old hags,” would sit on a person’s chest at night and “ride,” causing exhaustion and feelings of suffocation— thus the term “hagridden” to describe a rundown feeling. Characteristics of Old Hag attacks vary, but some are common to most incidents. The victim awakens abruptly, feeling an invisible weight pressing on the chest. He or she tries to move, struggle or scream, to no avail. The attack ends just when the victim is on the verge of losing consciousness. The victim feels drained for a prolonged period of time.

Some Old Hag attacks begin with sounds of phantom footsteps approaching the victim. Monstrous shapes, some with glowing red eyes, may be perceived. Repulsive smells may fill the air, and rasping breath may come from the Demonic shape. Old Hag attacks can occur during the day or night. Galen’s theory of indigestion is still proposed as an explanation for these attacks, as are sleep disorders such as narcolepsy, and repressed sexual tensions. These may explain some cases, but cannot explain all.

Some victims of Old Hag attacks say they think they were magically attacked by an enemy, who cast a spell to send a Demon. Various amulets such as religious objects are believed by many to ward off Old Hag attacks.

The Mad Gasser of Mattoon is said to have been a mysterious being, described as looking human, who supposedly gassed residents in the town of…

vampire An entity or person who attacks the living, causing wasting away, misfortune, and even death. Folklore traditions describe different types of vampires, but they…

You could be the target of a spell or curse and not even know it!All people, witches or not, are susceptible to these attacks. The…

A hag is an old, ugly woman believed to be a witch or sorceress; also, a supernatural, Demonic being whose powers enable her to live…