Plastic Medicine People – A term applied to Native Americans who perform ceremonies or teach traditional knowledge to Euro-Americans or anyone else who is willing to pay. It can also be applied to “wannabe Indians” and “wannabe shamans” (non-Native people who “want to be” Native and shamanic). The term is usually an accusation leveled against New Age neo-shamans by such critics as the American Indian Movement, the Center for SPIRIT, Ward Churchill, and Gohiyuhi/Respect. Wallace Black Elk is often listed as an example. 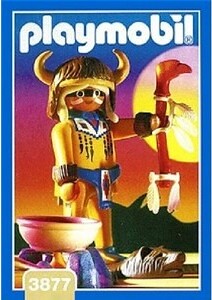 The term “plastic medicine man” applies literally to Playmobil’s toy \#3877, which claims to represent either an “Indian” or “Native American” medicine man and illustrates the point that disrespect flows both ways. It has been pointed out that Playmobil does not offer toy versions of other religious leaders (there is a Druid in its catalog, but no rabbi or pope), and that the company’s Native American collection brings together elements of entirely separate indigenous cultures. The title of Al Carroll’s contribution to They Call Us “Indians” (Banfield 2005), “Would You Buy a Plastic Eucharist from This Man? When Curiosity about Natives Turns to Abuse,” suggests a link between the metaphor and literal plastic representations.

A Little Bit of Shamanism : An Introduction to Shamanic Journeying – Ana Campos